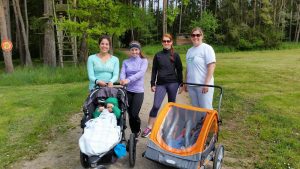 Members of the newest running group at U.S. Army Garrison Ansbach prepare to head out on a stroller-friendly run through the German forest. (Courtesy photo by Heather Luna)

ANSBACH, Germany (June 17, 2016) – Since the day he took command of U.S. Army Garrison Ansbach nearly three years ago, Col. Christopher M. Benson has emphasized the need for Soldiers, Family members and civilians to take ownership of the community if they wanted to make a positive difference.

“This is your hometown. Own it,” Benson has said throughout his time here.

“The key to that is getting out and owning the situation and participating in your community,” Benson said during an interview earlier this year. “There’s so many things out there that we can do in our community – whether it’s on post or whether it’s off post.”

That’s exactly what Army Family member Heather Luna has being doing since she arrived with her Family in January.

With some guidance from the garrison’s Directorate of Family and Morale, Welfare and Recreation’s Sports and Fitness Program, Luna started a running group at the beginning of May with the goal of participating in DFMWR’s Couch to 5K run this August.

The group is now more than 60 members strong and includes a range of skill levels from absolute beginner to those with competitive running experience. It’s also not uncommon to see the group running through the forests with strollers and pets in tow.

Luna was previously at Fort Bliss, Texas, where she was part of a running group that frequented the mountainous terrain of El Paso. Before joining the team, though, running had always been a personal endeavor.

Now in Ansbach, Luna regularly takes members of the group through Germany’s extensive trail network. She leads run sessions six days per week, though she encourages newer runners to limit themselves to three times per week.

Luna first rallied prospective team members in the first week of May with the kickoff of the Strong B.A.N.D.S. fitness initiative. She said many of the members, even those with no running experience, have been surprising themselves.

“They’re going farther than they ever thought they could,” said Luna. “When I first started the program, I would ask my runners, ‘How far do you think you’ll go?’ Their answer was usually, ‘Less than a mile.’ Writing it down and looking at the numbers, they usually estimated 20 percent of what they actually achieved by the end of it.”

Luna said the scope of the group has grown beyond the singular goal of training for a five-kilometer run, and includes giving members opportunities to improve their health, make new friends, spend time with their Families and simply get out of the house. So far, she said, the response has been “overwhelmingly positive.”

The group also serves as a positive outlet for spouses and Family members when Soldiers are away for training.

“I think sometimes as Army Families, we kind of tend to retreat a little bit when our spouses leave,” she said. “I think this has really helped to ease that transition. … I had someone last night who told me, ‘I really was just going to stay at the house and not do anything. Then I saw your [Facebook] post.’ She brought her whole family out, and they all ran. It was really awesome to hear.

“You think of it as a really personal journey,” Luna added, referring to running, “but in the community as a whole, I think it really does build a morale, where you see yourself achieving those goals and you feel a little more able to tackle some curve balls that the Army throws at us.”

Interested in joining? Call Ansbach DFMWR Sports and Fitness at 09802-83-2771 or DSN 467-2771, or visit http://ansbach.armymwr.com/europe/ansbach/programs/ansbach-fitness-centers. 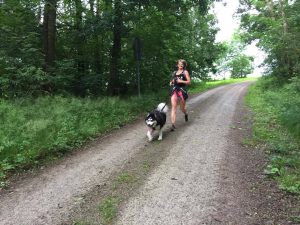