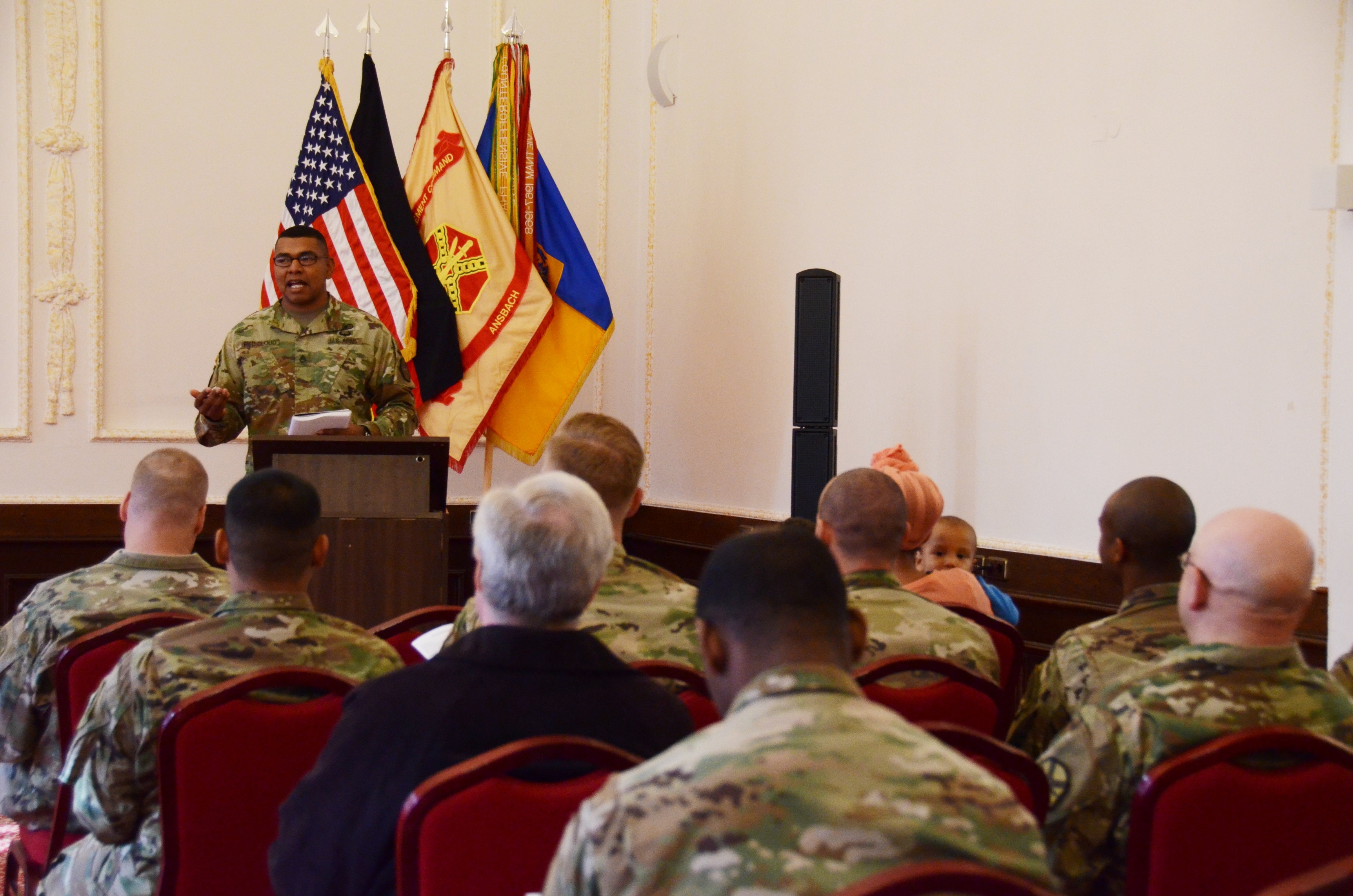 The main hall of USAG Ansbach’s Von Steuben Community Center was set up for National American Indian Heritage Month event Monday with displays in the back with information on notable Soldiers of Native American heritage, a podium, and several rows of seats. The setup was sparse and functional, the message was substantial.

The focus of the event, which was sponsored by the 12th Combat Aviation Brigade and USAG Ansbach Equal Opportunity advisers, was on Red Cloud’s keynote address.

“America’s diversity has always been one of our great strengths, as people of different backgrounds and cultures share their unique talents and perspectives,” said Cuvellier. “Our Army too is stronger for its diversity, and we must ensure that every member of our force has the opportunity to reach his or her full potential.”

Red Cloud serves with the USAG Ansbach Provost Marshal’s Office. He represented the garrison at the IMCOM – Europe Best Warrior competition in 2015. He holds a bachelor of science in criminal justice and a master of science in homeland security. He deployed to Iraq and Afghanistan. Red Cloud was born in Germany, was raised in DeRidder, Louisiana, and is a member of the Oglala Sioux Tribe from Pine Ridge, South Dakota.

Red Cloud began his remarks informally, talking about his lineage, specifically of his several times great-grandfather Chief Red Cloud (Itȟáŋčhaŋ Mahpiya Luta), as well as his great-grandfather Chief Oliver Red Cloud, with whom he spent time in 2013 in Pine Ridge Indian Reservation. He also outlined some common misconceptions about Native Americans, including that of preferred nomenclature.

“The first [misconception] is that we want to be called Native American or Indian or whatever other terms there are out there,” he said. “The fact of the matter is there is no true right or wrong answer, but a lot of people think you are being just or unjust by calling us Native Americans, which is acceptable for some people. You can go left or right with that. There are not only native people in America, there are native people in South America and Canada, and they all can be referred to as First Nations people.”

Red Cloud’s portion of the event consisted mostly of remarks both extemporaneous and prepared. The one exception was to share a tradition particular to his heritage.

“Since I’m from the Oglala Sioux tribe out of Pine Ridge, South Dakota – before any ceremony, before any custom – we play the Lakota national anthem,” he said.

After he played a recording of the song, he began the formal portion of his remarks, which are included in their entirety below:

“I am Lakota and I am Indian.” A quote made by my great-grandfather Chief Oliver Red Cloud while addressing the U.N. a few years before he passed away in July 2013.

My name is Taoyate Inajin Mahpiya Luta, and I am a seventh generation grandson of Itȟáŋčhaŋ Mahpiya Luta, that is Chief Red Cloud – who is also my namesake. I received my name during a sacred ceremony that we Lakota Sioux people refer to as a “sweat,” and in the English language my name means “stands for his people.” In my culture, a name is not something that is given lightly, and even when selecting our English names for our children there is much thought, care and prayer that goes into the selection. We believe that a name represents who you are. The fact that I was chosen to carry the name of my grandfather, who only had his Lakota name, and never took an English name for himself is a great honor and a great duty.

My grandfather won numerous victories for our people in wars with other tribes which led to his being named the chief of the Oglala Lakota. And when the U.S. government was at war with the tribes, my grandfather proved to be a formidable foe. Red Cloud’s War, the name given by the U.S. Army to the series of battles between the U.S. Army and the Native tribes in the Plains area, resulted in the second largest defeat of the U.S. Army by the Indian tribes (after the Battle of Little Bighorn), and the Fort Laramie Treaty which led to the establishment of the Great Sioux Reservation and the abandonment of several Army forts in that area. My Family still resides on the reservation in South Dakota, known as the Pine Ridge Indian Reservation today. Other notable members of my tribe are Crazy Horse and Sitting Bull. Although historically my people have been portrayed as “savages,” ruthless and ignorant in movies and television shows, our main objective has always been as my name says, to “stand for our people.”

Before my grandfather passed away, he spent many days in Washington D.C. speaking with the leaders of our nation and one of his quotes that is still remembered today, the reason he signed the Fort Laramie Treaty in 1868 is, “we want peace and love.” His focus and intent was never to be savage or ruthless, simply to stand for his people – to make sure that his children and grandchildren were able to access all that our country had to offer. And today, I stand before you, a noncommissioned officer in the very Army he fought against, because he fought. I am Taoyate Inajin Mahpiya Luta and I stand for my people – for ALL of my people. I am not a Native American, I am native AND American. I wear my uniform with pride for my heritage and my country. I do not regard my Family history with shame, but with pride because it is American history. What my grandfather did was open doors for our people, and through his battles with our government, we became unified as one people, one country that I am proud to serve.

At the final burial ceremony of my great-grandfather Chief Oliver Red Cloud in 2013, as his body lay in state in the chief’s tipi adorned by our traditional regalia, my younger sister and I stood guard in our ASUs – a living testament to how far we have come as nation, and yet, we still have further go.

As our nation recognizes this month as American Indian History month, I see people sharing pictures of natives in our traditional dress, videos of powwows and other ceremonies. Much of society views us as mystical, superstitious people with uncanny beliefs and “magical powers” and potions. Sports teams regard as mascots – unintentionally making a mockery of our religious traditions, ceremonies and battle cries. Retail stores sell us as costumes – not notable figures in our culture, but us – our people – as costumes.

I have stood at Wounded Knee, a few miles from my Family home and prayed over the graves of my ancestors who were murdered there, and those Family members who are buried there because it is a Family cemetery. I have stood on the edge of the cliffs of the Badlands and enjoyed its majestic beauty, not as a tourist, but because I have to pass by it going from my mother’s house to my uncle’s house. I have danced in traditional dance in celebration, not as a show but as a form of thanksgiving, and I have danced the traditional dance of mourning. I have hunted buffalo in the plains and used their carcasses in ceremonies that many would regard as foolish, yet they have significant meaning to who I am. I have slept in a tipi, I have sung praise songs in Lakota, I have beat the drum of my people and later the same day I have played pickup games of football in the Black Hills with my cousins. These things are who I am, who my children are. For us, fry bread is just as American as apple pie; a powwow dance is just a common as a line dance; a headdress is not part of a costume, it is a sacred piece of our attire and each one has a significant meaning attached to it. 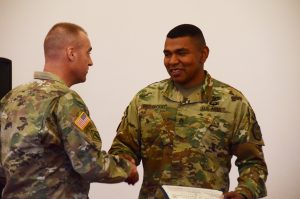 I would like to close with a simple request. I ask, as you celebrate this month set aside to honor native people, that you remember only one thing: that we are people. We live with you, we learn with you, our children play with yours, we work with you, we serve with you. We are native and American.

“We learn about different cultures, what’s important to them,” said Parra of the importance of observance months in general. “Don’t assume things you think you might know. Hear things from the actual person from the actual culture.”

Parra had approached Red Cloud about participating in this year’s event. After being unable to participate in 2015, Red Cloud was ready this year.

“I do remember seeing just some random pictures in the Commissary and the PX of Native Americans,” he said of National American Indian Heritage Month in 2015. “Once I saw that, I said, next year I’m going to speak. Even though there’s not always a huge turnout at these types of events, I think our culture needs to be highlighted.“Being personal, and telling from my own Family,” continued Red Cloud, “I think brings a different aspect to the understanding of the culture.”

To read this story as it appears on the Army News Service, visit www.army.mil/article/178100.