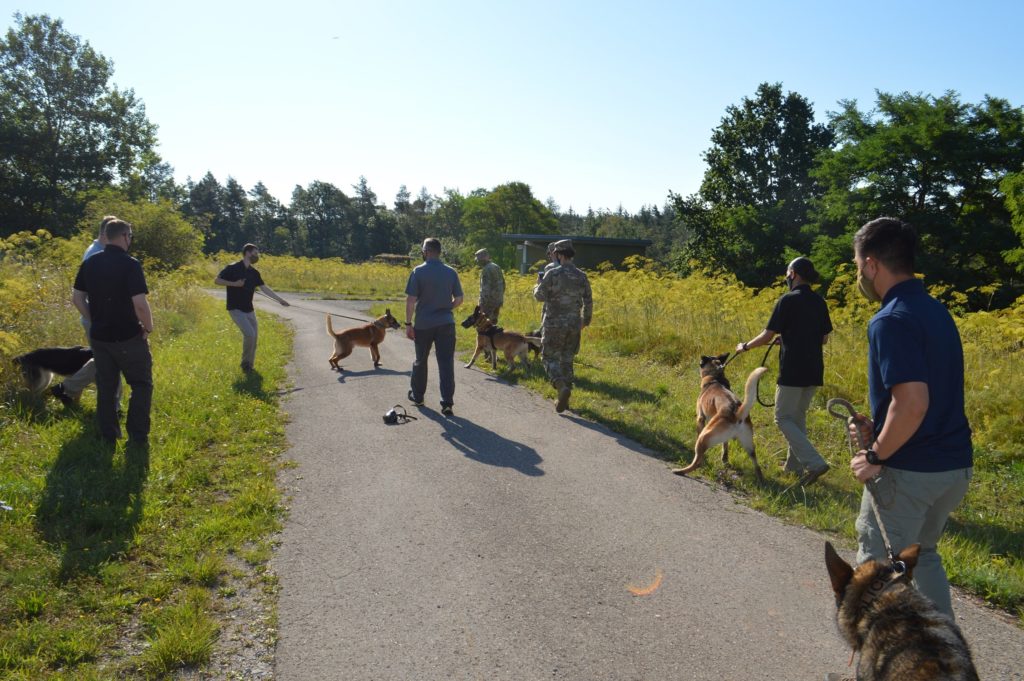 “Since October 2019, we have had a string of bites with the military working dogs with our Soldiers and a majority of them took place during kennel care when they would go into the kennels to clean or feed,” said Duane Stinson, MWD program manager, U.S. Army Europe (USAREUR), Wiesbaden. “Unfortunately at the MWD School at Lackland (Air Force Base, Texas), new dog handlers are not currently taught to read behavior. It might be briefly talked about but they don’t put any time teaching them to read behavior or go into really good communication between dogs and handlers.”

When the dog bite cases were looked at, the common denominator was that they could have been prevented if the Soldiers had been able to read canine behavior and communication signals, and could have seen what was coming and to react better to it, according to Stinson.

“We looked at the problem set. Between Maj. (Desireé) Broach, the veterinary behaviorist, and myself and 31K (military working dog handler) leaders here in Europe got together and developed a course to educate them (handlers),” Stinson said. “We developed the training and are traveling to all seven kennels in Europe to deliver seminars focused on stress management in the kennel environment and with the individual dogs and handlers how to manage their (MWD) stress. They are patrol dogs so they are trained to bite people and that is a very stressful task.

“They aren’t like police dogs that go home (with the police officer) and are part of a family unit,” he said. “Dogs are a social species, they don’t get to interact a lot and in the exercise they do fight with each other. This is the time to work through those issues and relieve the stress and anxiety that comes with the lack of dog-on-dog socialization.”

According to Broach, director and veterinary behaviorist, Veterinary Medical Center Europe, Kaiserslautern, there is lag time with what science says and what we currently practice. There is a knowledge gap to fill and handling practices that need to be updated.

“We trying to correct a problem with new information and are not saying the handlers are wrong,” said Broach. “We are saying that we have more information to make it safer for the handler and better for the dog.

“The original intent was we didn’t want them to socialize together because we wanted them (the MWDs) to be bonded to people,” the major said. “They will bond with people and dogs so it is not a reason to keep them from normal expressions of behavior and we’ve seen the adverse effects from suppressing their normal behaviors.”

“If you can read your dog you can see what is going to happen before it happens, such as you see him getting uncomfortable nervous or scared,” said the kennel master. “You can manipulate that dog to give him confidence and work through it or avoid it all together.”

In the socialization exercise, the handlers and MWDs walked to a flat lot and circled numerous times allowing the dogs to interact. All the dogs had muzzles on to prevent injuries and remained leashed.

To the normal person it will look like the dogs are fighting versus socializing.

“Getting them together in a safe manner is going to force you to watch their behaviors. When you are a bit more tense and vigilant your dog reacts to you,” said Broach. “How they react to other dogs together may surprise you. We want them to be dogs and interact but they may not know what to do because they have never had the opportunity.”

“It definitely opened my eyes,” said Sgt. Ian Long, Ansbach MWD Kennel non-commissioned officer in charge. “The dogs can be very anxious towards one another and we built that into them.”

Long knew his MWD, Kimbo, was anxious around people and dogs, and hopes this training will help socialize him more so they can focus on the mission.

The Ansbach MWD Kennel houses eight handler-dog teams dedicated to helping to safeguard Army installations and activities, to detect bombs and other explosives before they inflict harm and to deploy worldwide to support military and diplomatic missions.

Story and photo by Dani Johnson