ANSBACH, Germany – Members and friends of the museum of local military history gathered Saturday, June 2, 2018, for the unveiling of a banner and a special guided tour of the museum.  The banner, depicting U.S. Army Soldiers and families with text reading “Thank you, U.S. Army, for more than 70 years of peace” in English and German, was hung during a brief ceremony at the entry gates of the museum.

Guest speakers Andreas Schalk, member of Bavarian state parliament,  Fritz Wittmann, president of the Muna Museum Association, and others took the opportunity to thank the U.S. military for their continuing support of the region and explicitly expressed their gratefulness for more than 70 years of peace in Germany. Schalk reminded the audience that in the past 70+ years the U.S. Army has become “an important part of our society,” and that “not only personal, family or friendly relations, but also economic relations” have developed over the years.  Jürgen Trobendar, chairman of the regional ASP, a CSU party working group for interior and exterior security, addressed the representatives of the U.S Army directly: ” The Americans here are not only our guests, but friends among friends.” 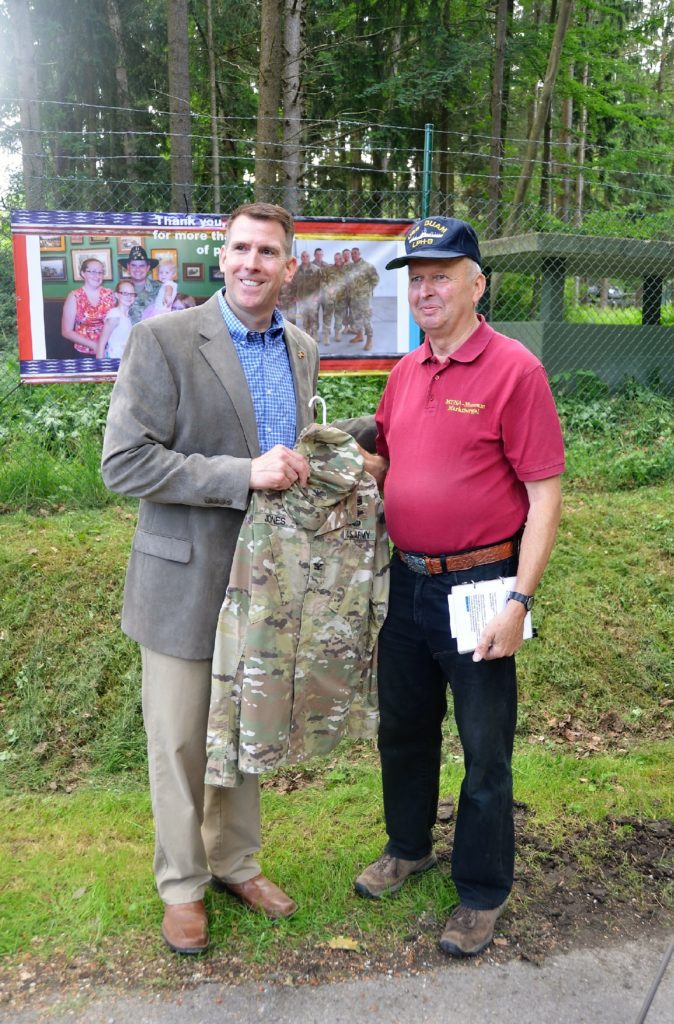 Col. Benjamin Jones, U.S. Army Garrison Ansbach commander, thanked the guests speakers for their supportive comments and expressed his hopes for many more years of fruitful cooperation. In addition he donated one of his service uniforms to the museum, as it has become tradition for parting commanders and command sergeants major. The uniforms, complete with name tags, are proudly displayed inside the museum.

After the unveiling ceremony, the invited guests were treated to a recently produced video about the museum’s history and a special guided tour. Wittmann, acting as tour guide, explained the military history of the region with many examples and vivid anecdotes.

The Muna-Museum of Military History of the Franconian Heights, as it is called with its full name, is located in a former ammunition factory of World War II, and is run as an association by volunteers, most of them German, but some U.S. Americans, who dedicate their time to restore and display historical military equipment, material and documents of both the German and the U.S. Army, thus documenting the military history of the region. It is sitting in the forest near Franken Kaserne, surrounded by the U.S. military training area of Oberdachstetten.

Visitors interested in the museum can stop by every first and third Saturday of the month for public opening hours. Once a year, the staff hosts an open house that draws more than 3,000 visitors on one single day, providing them with guided tours in both languages, entertainment for the kids and typical army food served from a field kitchen.

This year’s open house takes place Sunday, June 10 from 10 a.m. to 6 p.m. The museum volunteers will also schedule private tours to show their exhibition and educate their visitors about the military history in the Franconian Heights.

To learn more about the Muna Museum, read the article Local Muna Museum merges military presence with past in the Ansbach Hometown Herald.