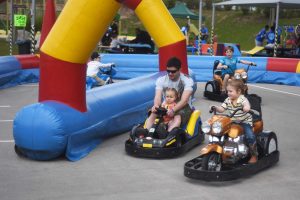 Ansbach parents and children race around the track outside the Katterbach Child Development and School Age Center during the 30th anniversary celebration of the Month of the Military Child April 30, 2016. (U.S. Army photo by Stephen Baack, USAG Ansbach Public Affairs)

ANSBACH, Germany (May 3, 2016) – The Katterbach Child Development and School Age Center transformed into a full-blown carnival April 30 as hundreds of Ansbach children and their Family members celebrated the 30th anniversary of the Month of the Military Child.

Event attractions catered to visitors of different ages, interests and moods. Those feeling more daring might have opted for the bungee trampoline where they could jump, flip and roll to their hearts’ content.

Those with a competitive streak might have chosen to race around the track at the Electric Fun Park or test their driving abilities on a smaller scale with RC racing.

For the drama queens and kings, children were free to try on costumes from Theatrix and take photos, courtesy of the Terrace Playhouse.

For the creative types, an abundance of attractions featured painting: canvas-painting, finger-painting, hand-painting, face-painting and car-painting – yes, literally painting all over a real car.

For the Renaissance child? A little bit of everything, and then cupcakes at the end.

Trude Moellmann, who managed the celebration’s planning and setup, said children were immediately drawn to the bungee trampoline, electric scooters and bounce houses, but they kept coming back to the different painting stations.

“It’s all about play and enjoying and allowing the kids to be creative,” said Moellmann, who serves as the director of Parent and Outreach Services for Ansbach’s Child, Youth and School Services. “That’s why we have a lot of hands-on, artsy things and paintings. It’s not just the rides. It’s so kids can get a little messy.”

Moellmann said the presence of a real car that children could paint raised a few eyebrows at first.

The Automotive Skills Center was responsible for the delivery of the non-working car, and it’s an attraction CYSS also brought to the grand opening of the Storck CDC and SAC complex a couple of years ago.

“It looks really good,” she said of the formerly white car. “I think it looks nice and colorful, and I wish someone could actually drive away in it.”

The event had no set schedule; just four hours of fun, along with food, beverages and activity stations from community sponsors. Moellmann attributed the success to simple teamwork – from the CYS Services team to the Area Support Team.

“It was great team effort, and it was a lot of fun,” said Moellmann. “Of course it’s always a little stressful because I’m very nervous about things. Everybody did just an excellent job, and I’m very proud. We have an awesome team. CYS is awesome. All the community events, we didn’t have to worry about anything.”

The one event amid all of the attractions, which was tied to this year’s official theme of the Month of the Military Child: “Leaving Our Legacy,” was the burying of a time capsule. With the help of Col. Christopher M. Benson, U.S. Army Garrison Ansbach commander, children and CYS Services staff joined in with a shovel to cover the time capsule with dirt.

“We put a little bit of everything that we thought represented us here for 2016 in the capsule, from photos and videos,” said Moellmann. “We had the young ones actually doing voice [recordings] and talking. We have photographs. We did green screen, so we have photos of the staff on the beach and funny things. We have some writings and the activities that we did here, so we can see what went on.”

The capsule, which is an air- and water-tight ammo can, is scheduled to be reopened in 20 years to coincide with the 50th anniversary of the Month of the Military Child.

“Hopefully somebody who’s here now will be there,” she said. “Soon there will be a plaque that will be in the front of it.”

Moellmann said she was also thankful for the nice weather, something she attributes to the little ones in the CDC infant room.

“We asked them to make a ‘box of sunshine,’” she said. “They colored a box and opened it up this morning, and this is what we have.”

Ansbach community members stand together for a photo after burying a time capsule outside the Katterbach Child Development and School Age Center during the 30th anniversary celebration of the Month of the Military Child April 30, 2016. (U.S. Army photo by Stephen Baack, USAG Ansbach Public Affairs)