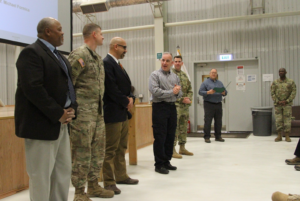 Installation Management Command Europe Region Director Michael Formica congratulates IMCOM supervisors for a job well done before leading a town hall meeting at Mihail Kogalnceanu Air Base on April 6, 2017. The group was being commended for exemplary service in supporting the efforts of Operation Atlantic Resolve, a NATO mission between the US and its European allies and partners to promote peace and enhance relationships across Europe. (Photo by Pvt. Nicholas Vidro, 7th Mobile Public Affairs Detachment)

MIHAIL KOGALNICEANU, Romania (April 6, 2017) — On many bases overseas Soldiers enjoy several of the amenities that are available in the states, even if they are unaware of the effort needed to make a foreign place feel like home. The Army’s Installation Management Command Europe region director, Michael Formica, hosted a town hall meeting here April 6, shedding light on the future role of the base.

The meeting was an opportunity for some of the support elements and organizations on base, like the police and fire departments, to gain insight on the importance of their roles while on rotation during Operation Atlantic Resolve, a NATO mission involving the U.S. and its European allies and partners as they promote peace and deter aggression in Europe.

The teams that run the base’s day-to-day operations are getting ready to host more personnel in the coming months as numbers begin to increase for the upcoming Saber Guardian training exercise. The large exercise will include the combined forces of the U.S. and its European allies in a show of commitment and deterrence in promoting peace and regional stability throughout Europe.

Staff Sgt. Justin Staab, MK’s fire inspector from the 467th Headquarters Detachment, expressed his thoughts on what the information at the meeting provided the men and women of the base’s supporting units.

“This was probably the first time a lot of people have seen what’s on the map, and it opens everyone’s eyes on what we’re doing here,” he said.

The effort and responsibility isn’t solely on the current support staff at MK. The new and primarily US-led civilian teams will be created from supplemental units from the countries they’re operating in, namely Romania and Bulgaria, to enhance their current capabilities and to lend support as the base’s personnel numbers increase. The incoming civilian teams will be trained and held to the same standards as the Soldiers they will be working with.

Formica touched on many subjects, from the importance of professional ethics to the support teams’ place in the larger picture that makes up OAR. These subjects all touched on the significance of America’s involvement and presence in Romania and eastern Europe.

“The main message I wanted to get across was the critical importance of these installations to U.S. Army Europe and how we should be getting into our mission,” he added.

The director also outlined the importance of employing as many American and allied resources for the upcoming Saber Guardian exercise, as well as for real-world contingencies, as quickly as possible. This will be most important at the areas where combined U.S. and Romanian forces already train, becoming primary staging areas for NATO allies and partners in days and years to come.

It’s these levels of cohesion and planning that are needed for the base at MK to operate, and to make these places far from home feel like home. What this means for troops on base and those rotating forward in the future was stated simply by Formica.

“What’s important to us is that we’re giving troops a place to live, a place to sleep, a place to eat, and WiFi; those are key here,” he said.