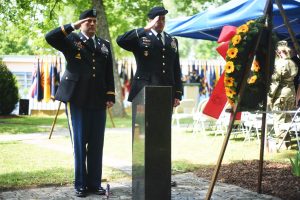 ANSBACH, Germany (May 27, 2016) – Honoring the heroes who walk among us only in spirit, Soldiers, Family members, veterans and civilians gathered for a Memorial Day ceremony May 26 at Storck Barracks’ Memorial Park to pay tribute to all those who have died while serving in the U.S. military.

U.S. Army Garrison Ansbach and the 12th Combat Aviation Brigade leaders joined officials and members of American Legion Post 1982 and Veterans of Foreign Wars posts 10708 and 9342 to participate in the ceremony.

These leaders, along with Illesheim Mayor Heinrich Förster, rendered salutes to ceremonial floral wreaths for the occasion as a symbolic way to honor those who have paid the ultimate sacrifice in defense of their nation and its values. The tradition of laying wreaths can be traced as far back as the 1800s when Memorial Day was known as Decoration Day, when people first practiced the custom of decorating service members’ gravesites with flowers, flags and wreaths.

“For our nation, Memorial Day is an opportunity to acknowledge what is felt most deeply but expressed the least,” said Nagan. “Together we journey into the past and revisit a flood of painful memories so that we may honor the men and women who fought and died to preserve our way of life. We are forever mindful that without their courage, their valor and their singleness of purpose, America would simply not be the great nation it is today.

“Today, with heavy hearts, we recall those lost,” Nagan added. “They had names. They had Families. They were our brothers and sisters, moms, dads and children. Today provides an opportunity for all America to give thanks for all we are blessed with.”

“More than likely, most of us standing here today have known someone who has died in uniform,” said Benson. “Memorial Day is our opportunity to pay our respects to them. We pause to remember their valor and great sacrifice. They came from across our country, from every race and religion, from farms and factories, and cities and neighborhoods, and every imaginable walk of life.

“These Soldiers were not the only ones who paid a price,” Benson continued. “Every fallen hero leaves painful memories and great sorrow for their Families and friends. So, to remember those who made the ultimate sacrifice, let us also think of their Families, for whom the loss is so much more personal.

“Memorial Day,” Benson added, “is a solemn day of mourning, but it is also a day of celebration – a celebration of the men and women who dared all, who gave all, so we might continue to enjoy the freedoms and benefits of our nation.”

After Benson’s remarks, American Legion Post 1982 Commander Ken Aungst recited the names of those service members whose names are engraved on one of several memorial plaques and monuments at the park. Aungst also recited the names the Soldiers who served with him in Vietnam and who gave their lives at Kontum Army Airfield Jan. 10, 1968.

“These service members we honor here today came from all walks of life, but they shared several fundamental qualities,” Aungst said before reciting the names. “They possessed courage, pride, determination, selflessness, dedication to duty, and integrity – all the qualities needed to serve a cause larger than oneself. … They were ordinary people who responded in extraordinary ways in extreme times.”

The Taps bugle call reverberated through the park as attendees rendered honors, after which leaders laid the ceremonial wreaths and paid their respects. 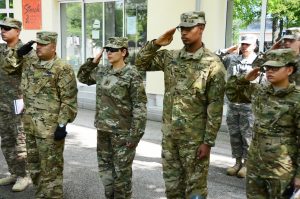 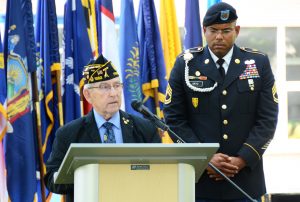