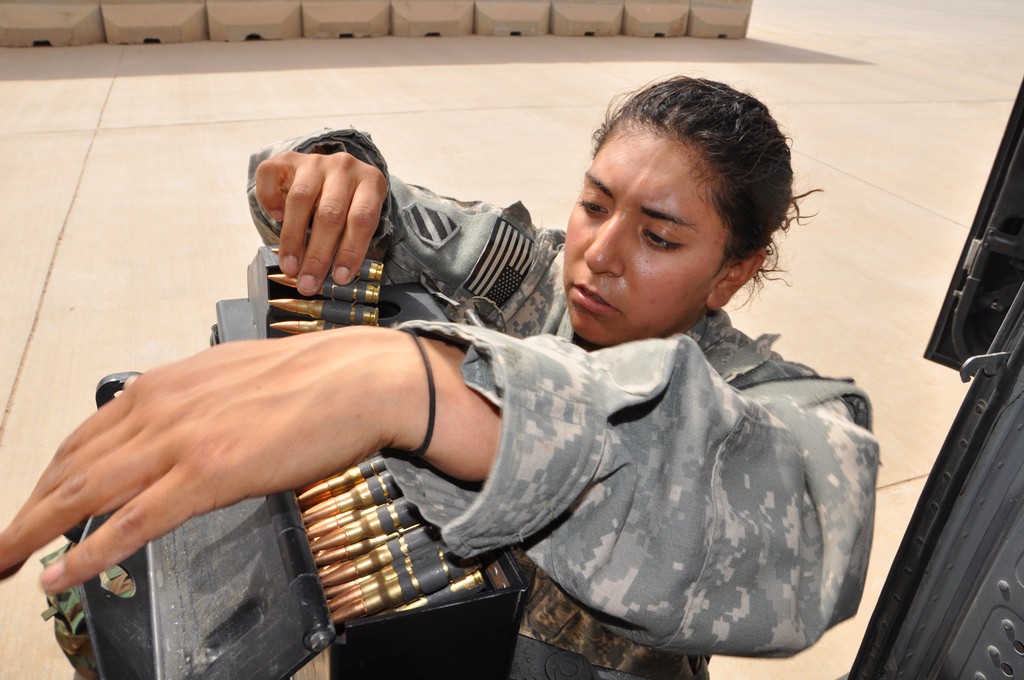 Spc. Crisma Albarran detaches an ammunition case from its mount after a UH-60 Black Hawk helicopter flight over Iraq, March 14, 2010. Albarran, with Task Force 38’s B Company, 3rd Battalion, 158th Aviation Regiment, volunteered for the job as door gunner before her second deployment to Iraq, and has flown more than 100 hours toward her door gunner certification. During her first Iraqi deployment in 2007, she was a petroleum supply specialist with the 3rd Infantry Division. (U.S. Army photo)

WASHINGTON (Army News Service, Oct. 1, 2015) — Army Secretary John M. McHugh submitted to the defense secretary his recommendations on whether to open, or to request an exemption to keep closed, the remaining Army military occupational specialties, or MOSs, not open to women, Sept. 30.

Currently, there are 13 MOSs (i.e. officer MOSs 11A, 19A, 19B, 19C; and the enlisted MOSs, 11B, 11C, 11Z, 13B, 13D, 13F, 19D, 19K, and 19Z) that remain closed to female Soldiers. However, the defense secretary has already officially notified Congress, as of July 21, of his decision to open 13B (cannon crewmember) and 13D (field artillery automated tactical data system specialist). The Army cannot start recruiting women into these newly-opened positions until the congressional notification period is complete.

To prepare recommendations to the defense secretary, Army Training and Doctrine Command led the Army’s effort to re-validate performance standards required for entry into each MOS. Doing this has positioned the department to increase the total force capability and prepare the force for future mission requirements. Also, information from these and other studies were considered in McHugh’s final recommendations to DOD.

Now, the Office of the Secretary of Defense, or OSD, will complete its own review of not only the Army’s recommendations, but also the recommendations of the other services before passing its signed recommendation on to Congress. After 30 consecutive in-session days of Congress, if lawmakers have not disagreed with the OSD’s recommendation, the Army can then begin recruiting female Soldiers into those MOS that are opened to women.

The Army’s recommendations regarding the 13 currently closed MOSs have not been made public at this time.

In recent years, the Army has made significant strides in opening positions to women that had been previously available only to male Soldiers.

Since 2012, the Army has opened to women six previously closed MOSs and more than 55,000 positions in “closed units” across all Army components. Those units were closed because they were designated as direct ground combat units. Such a unit might have included positions in MOSs that were open to women, but because the unit itself was closed, women could not hold those positions.

In recent years, the Army has opened to women the following MOSs: