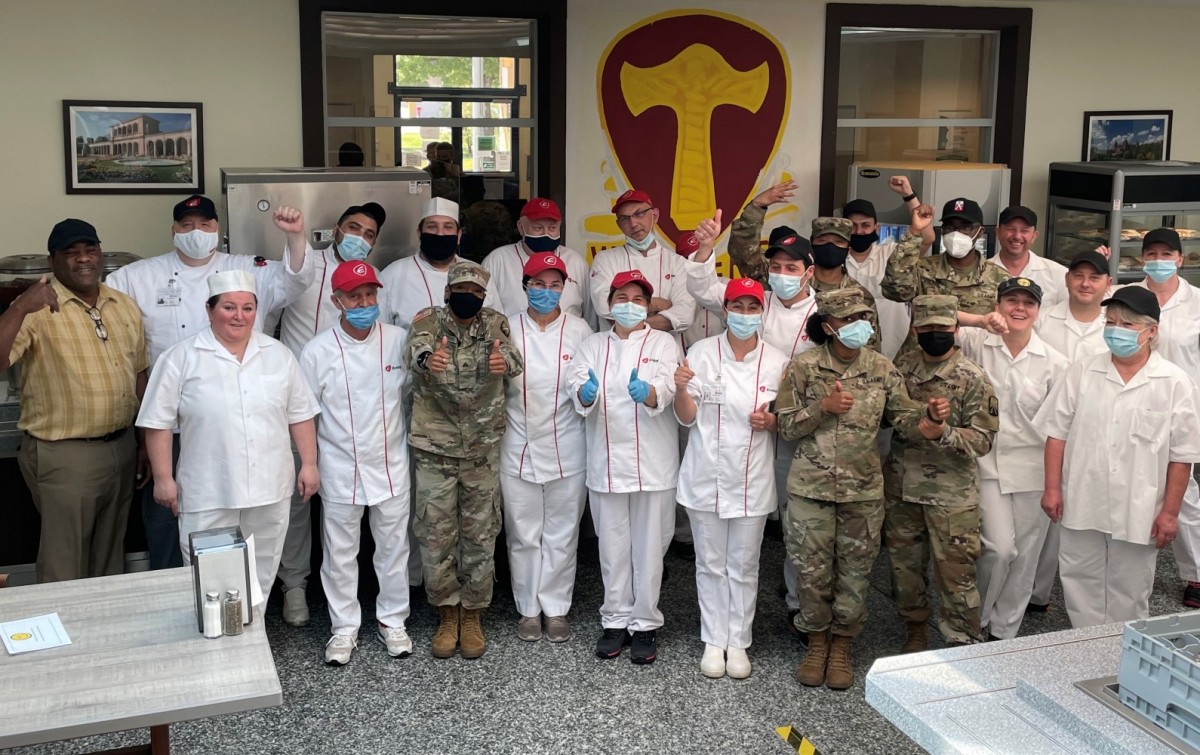 ANSBACH, Germany – Great organizations are most often comprised of great people and great leaders, and the dining facilities belonging to the 405th Army Field Support Brigade’s Logistics Readiness Center Ansbach are no different.

But what makes them the best are the people and the leaders, said Jerome Young, the LRC Ansbach installation food program manager.

Young oversees the food program’s two facilities and the more than 100 people who work there – to include German local national contractors, LRC Ansbach civilian employees and Soldiers from the 221st Quartermaster Company (Field Feeding Company).

“We always stress teamwork and collaboration,” said Young, who is a retired sergeant first class with 21 years of active duty service. “They work together very well as a team, and that’s really the only way they can be successful.”

As the LRC Ansbach food service program manager, Young is responsible for ensuring all the equipment is replaced as needed, work orders are completed properly and upgrades to the facilities are made in a timely fashion. He also oversees the supply management process, conducts inspections to ensure each facility is operating in accordance with Army regulations, and he ensures that all sanitation standards are being met. In addition, he is a liaison between the dining facilities and the USAG Ansbach leadership as well as the units and Soldiers they support – those who dine at the restaurants. And he acts as a liaison between the Army food inspectors and the two dining facilities.

“In short, I’m the individual who ensures these facilities have everything they need to operate,” said Young, who has served five times in Germany – his first tour at Pinder Barracks, not far from where he works now.

“Throughout my whole military career – I joined the Army in 1982 – until now I’ve been in food service,” said Young. “When I first came here to Ansbach as the food program manager two years ago, the Katterbach restaurant had not participated in a Philip A. Connelly Food Service Excellence Competition in quite a few years.”

Participating in a competition at this level means more than winning, he said. It gets a lot of things done because it places the facility and the people who work there at the highest levels of visibility.

Young, who is originally from Manhattan, New York, said the Katterbach Warrior Restaurant did not place in the competition the first year “but the point is they competed, and it helped them bring the facility and program up to a higher standard.”

“During the next competition, they should do better – maybe place at USAREUR-AF or even Army level,” he said.

Young said he and the entire team – all the cooks, dining facility attendants, administrative specialists and the Soldiers from the 221st QM Co. – all have one mission. Their mission is to support the warriors.

“I look at Class I, which is at the top of the supply chain class system, and I honestly feel that it is the most essential. Without it the Army cannot survive,” said Young. “I do everything in my power on the behalf of warfighters, and that’s crucial to me. I truly enjoy supporting the warfighters.”

One of the big projects Young and the Ansbach food service team is working on to better support warriors is a proposal to install a food service kiosk at Shipton Kaserne. The 5th Battalion, 4th Air Defense Artillery Regiment stood up there just over two years ago, and currently they have more than 250 meal card holders being bussed from Shipton to Katterbach daily for meals.

“They don’t have a facility of their own to dine at right now so the idea is to get these Soldiers a better location to eat at – where they work, reside and sleep at,” Young said.

Another future project near and dear to the Ansbach food service team is the Katterbach Warrior Restaurant renovation, which is scheduled to break ground in February 2023. The $11 million project is being finalized with the help of the Europe District of the U.S. Army Corps of Engineers, USAG Ansbach’s Directorate of Public Works, the Katterbach Warrior Restaurant manager, the garrison’s master planner, Young and others in support.

The 405th AFSB is assigned to U.S. Army Sustainment Command and under the operational control of the 21st Theater Sustainment Command, USAREUR-AF. The brigade is headquartered in Kaiserslautern, Germany, and provides materiel enterprise support to U.S. Forces throughout Europe and Africa – providing theater sustainment logistics; synchronizing acquisition, logistics and technology; and leveraging the U.S. Army Materiel Command materiel enterprise to support joint forces. For more information on the 405th AFSB, visit the official website at www.afsbeurope.army.mil and the official Facebook site at www.facebook.com/405thAFSB.