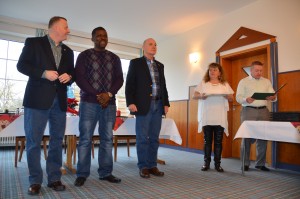 ANSBACH, Germany (Dec. 15, 2015) — Members of the Logistics Readiness Center – Ansbach assembled at a local golf club Dec. 2 to recognize their workforce for capably handling a large throughput during a time of short staffing.

With the announcement of the Aviation Restructuring Initiative in April 2015, many of the tenant unit Soldiers and their Families were set to depart the U.S. Army Garrison Ansbach community by October 2015.

The Logistics Readiness Center – Ansbach, or LRC-A, aids Soldiers during permanent changes of station, and they did so during a time when many of their U.S. employees had to return to the U.S.

Col. Todd S. Bertulis, the commander of the 405th Army Field Support Brigade, and Command Sgt. Maj. Stanley Richards, command sergeant major of the 405th AFSB, attended the event, praised the leadership, and recognized the efforts of the individual employees and the LRC-A as a whole. Bertulis called the LRC “the unsung hero that’s behind the scenes.”

“The team you all have here is wonderful,” said Bertulis to the group. “I’m amazed at how you’re able to in stride execute the changes in personnel while still maintaining the support to the warfighter. And that does not happen automatically. That happens with folks that are dedicated to the warfighters.”

Although all of their employees were recognized during the event, three were specifically singled out and received the Achievement Medal for Civilian Service. Daniel Cooper, who was working at the Transportation Motor Pool dispatch office, retrained to become a personal property counsellor. Cardelion Deese, while working as the plans and operations officer, took on many other tasks including managing the lifecycle replacement of the LRC-A’s office automation and processing Defense Travel System transactions. William Strosnider, in addition to giving regular driving instruction at Katterbach Kaserne, trained Soldiers with the rotational aviation battalion at Storck Barracks during the weekend. 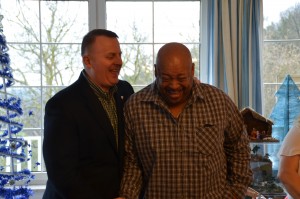 Ray Yarbrough, who works at the Central Issue Facility, was singled out for “providing outstanding customer support” according to the organizers events, which they found out through an email from a Soldier who was helped by Yarbrough.

“I was shocked,” said Yarbrough. “I didn’t even realize I was getting these awards.”

To read the story as it appears on the Army News Service, visit www.army.mil/article/159945.