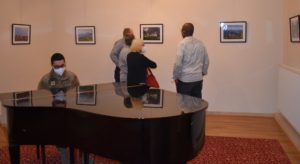 ANSBACH, Germany (Jan. 25, 2022) – Peter Mayaka, a U.S. Army veteran living in the Ansbach military community since 2018, has recently been discovered as a talented photographer.

He was offered the opportunity to host his own photo exhibition at the Von Steuben Community Center, displaying a selection of German landscapes and cityscapes.

A passionate hobby photographer for years, Mayaka decided in 2021 to participate in a photo competition called “Gesichter einer Stadt” (Faces of a City), hosted by the city of Ansbach. One of his images was chosen and prominently displayed downtown, where it caught the eye of an American community member, who recognized his talent and suggested a photo exhibition for the military community of Ansbach.

“Photography has always fascinated me since I was a young boy, and I was old enough that my father finally let me touch his sacred camera,” he explained. “When I left the Army, I picked it up as 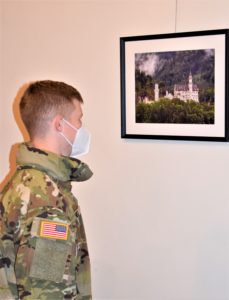 a hobby to reconnect with the world around me.”

After a few basic college courses followed by an autodidactic approach, he settled on photos of landscapes and cities. “I tried different ways until I found my voice, my style, what excites me,” Mayaka said.

The photo exhibition “Picturesque Germany” will be open to community members until Feb. 25 during regular opening hours of the Von Steuben Community Center on Bismarck Kaserne.