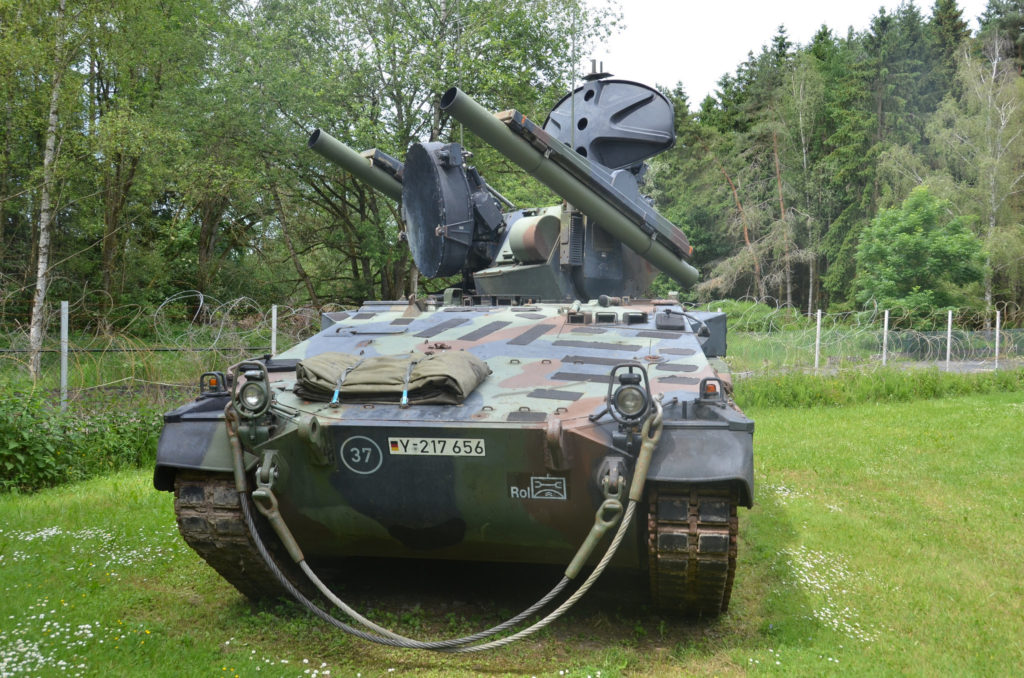 A German tank at the Muna Museum (Photo: Bianca Sowders)

ANSBACH, Germany (June 9, 2017) – Nestled in the woods near a small Middle Franconian town, hidden by a U.S. military post and training area surrounding it, sits a non-descript building with a somber history that now houses a military museum, the Muna-Museum of Military History of the Franconian Heights.

The museum, located in a former ammunition factory of World War II, is run as an association by volunteers, most of them German, but some U.S. Americans, who dedicate their time to restore and display historical military equipment, material and documents of both the German and the U.S. Army, thus documenting the military history of the region.

The Franconian Heights, Frankenhöhe in German, is a rural geographical region located in the counties Ansbach and Neustadt an der Aisch-Bad Windsheim. Historically, the area is home to several military installations that once belonged to the German military until the U.S. Army arrived April 17, 1945. One of those sites was a secret ammunition factory, called Munitionsanstalt or Muna, which remained hidden from the Allied Forces until U.S. ground troops marched in.  Most of the smaller buildings, ammunition and more than 100 bunkers were destroyed by the allied troops, except for the Franken Kaserne post and Building 116, which now houses the Muna-Museum.

The building was originally constructed in 1936 with four separate wings, shaped like a cross or a spider, with another structure added at the end of each leg to prevent total destruction if an accidental discharge or explosion happened in one of the wings. The attachments on the end of those wings give the building a very unique shape, that of a Swastika, which can only be recognized from a birds-eye view.

During its operation as many as 3000 workers, mostly civilians and Ukrainian laborers, plus an unidentified number of soldiers, produced anti-aircraft ammunition, tank ammunition and other explosives for the Third Reich in the facility. The surrounding communities still struggle with the removal of munitions that remained in the ground after the U.S. Army tried to detonate them there decades ago.

After being used by the U.S. Army for about 10 years, Franken Kaserne became a German Bundeswehr (army) post for more than four decades. In 2008 the U.S. Army moved back in after the Bundeswehr troops left the Kaserne due to a draw-down in 2006. 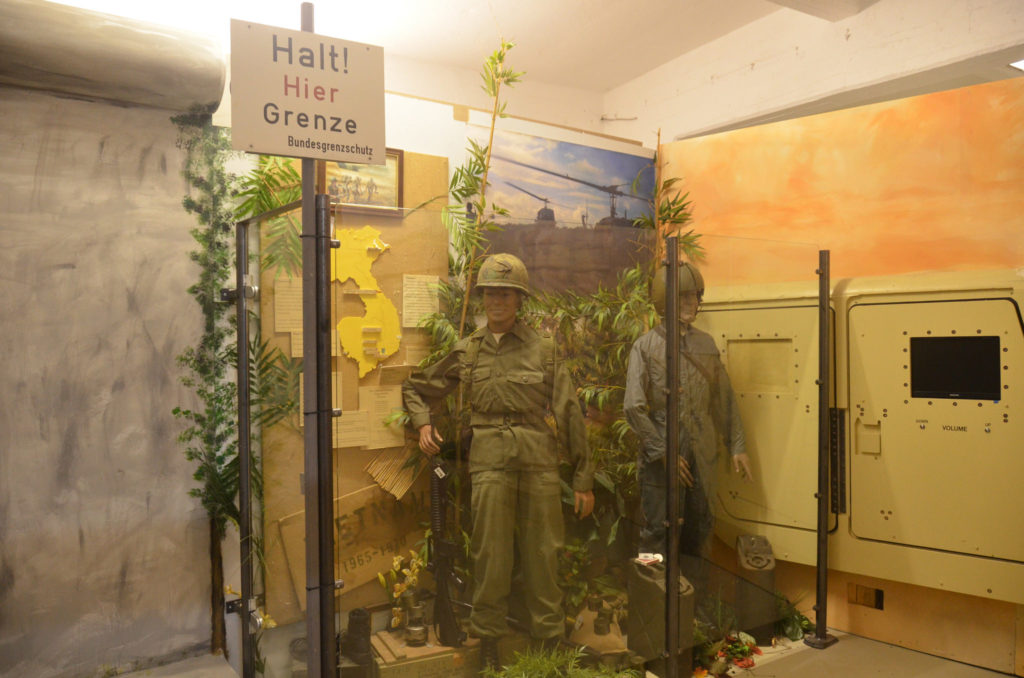 A display at the Muna Museum (Photo: Bianca Sowders)

The Muna-Museum, founded in 2002 by the Association of Local Military History, a group of history enthusiasts, is celebrating its 16th anniversary this year. Thousands of people visit every year to see the collected artifacts, militaria and military equipment and to learn about the lively military history of the region, which was heavily influenced by both the German and U.S. Army.  The indoor and outdoor exhibition covers almost an acre of land, filled with lovingly restored military equipment, including tanks, helicopters and rocket launchers. Indoors visitors can find historical photos, documents and dioramas depicting life in the military during different time periods. Many former commanders who were stationed in the area have donated uniforms from different eras for the display, marking their part in the military history of the region. 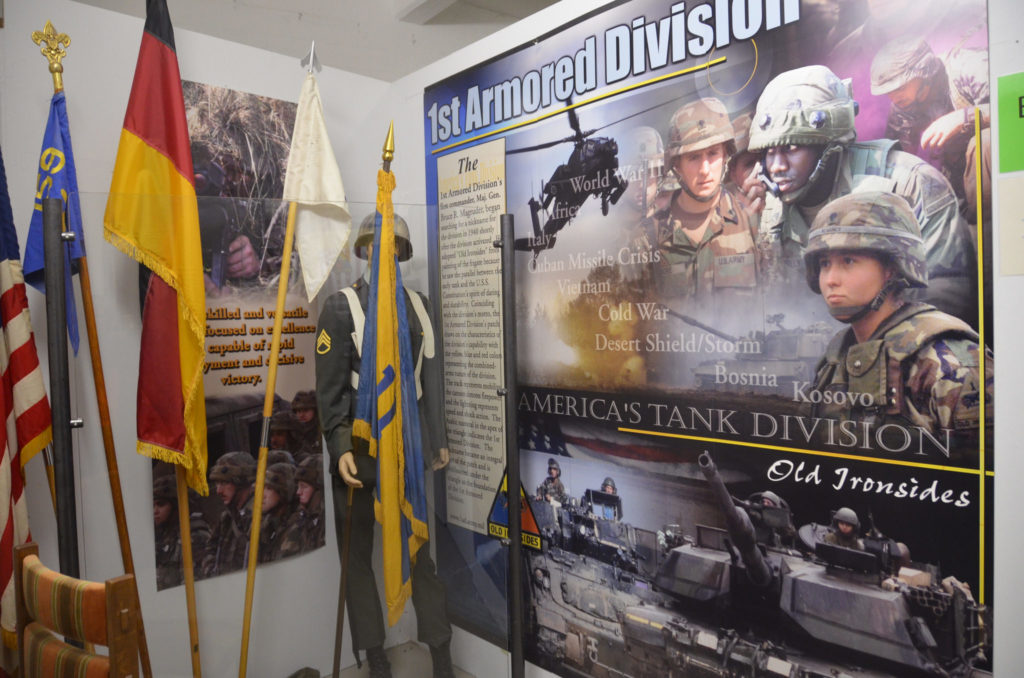 An indoor display of the mission of 1st Armored Division (Photo: Bianca Sowders)

A recently added display depicts the history of the U.S. Army in Europe since 1917, covering two World Wars and the Cold War in that timespan. “When the U.S. Army came here the first time, they weren’t properly equipped at all, they had to buy their uniforms and equipment from the English and the French,” said Fritz Wittmann, chairman of the organization. “But they turned around the war, they must have been incredibly brave warriors, because they were convinced of their cause, while the Germans were just worn out from three years in the mud and dirt of the trenches.” Like many other pieces, the display was donated to the museum by U.S. Army officials, when it was no longer needed.

Out of 130 club members, about 10 active members invest countless hours of volunteer time into the restauration and arrangement of the show pieces. Most of them are German locals, some of them even current or former employees of U.S. Army Garrison Ansbach or the tenant units. The attraction to the museum for the volunteers can be explained with the desire to accurately report and display the military history of the region without glorifying certain eras or wars. The overall intent of the museum is to preserve a true picture of the time to educate current and future generations. 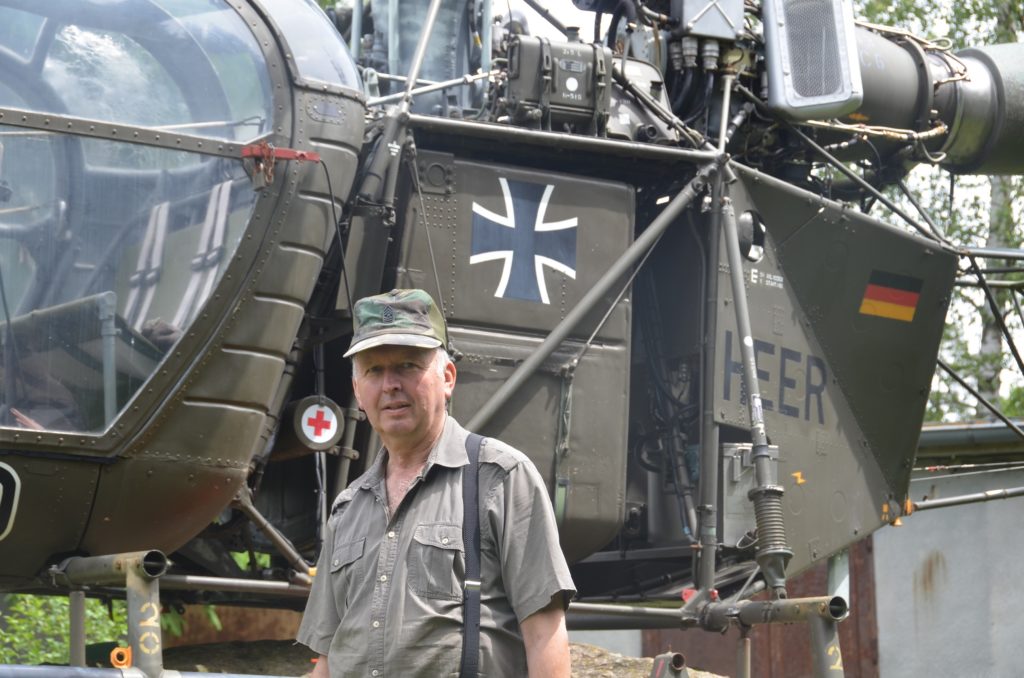 The founding president of the association, Fritz Wittmann, was the last residing Bundeswehr sergeant major of Franken Kaserne and remains, after retiring from active duty, the Kaserne’s custodian until today.

“The military presence here is part of our history,” said Wittmann. “I grew up with tanks on the road, I couldn’t imagine this area without the military, it is part of my life. One day I was driving through downtown Ansbach and saw how Hindenburg Kaserne was stripped empty, and I decided I didn’t want the same thing to happen here. I assembled seven like-minded people and founded the association. Our goal was to display the military history of our home town … now the area we cover is much larger, the whole Franconian Heights.”

In 2010 the museum association signed a rental contract with the U.S. Army for 35 years.

“It is important to me that the people after us see what was going on here,’ said Wittmann. “I always say ‘He who doesn’t know his history, will make the same mistakes again.’ People need to learn about the many ways humans have invented to kill other humans.”

There are also plenty of U.S. American retired expatriates in the region. Many of them married a German national and decided to take up permanent residence in Germany. Throughout the years, many U.S. members of the military community donated their time to help out at the facility. One of those who stayed is Leonard De Boisbriand, called Dee by his friends, who was stationed at Storck Barracks in Illesheim as a U.S. Army radar technician in 1970. After leaving the Army in 1972, he returned to Germany to marry his German wife and worked for many years as a civilian employee for a large American electronics company. He joined the club in 2009 and became the treasurer and American tour guide. 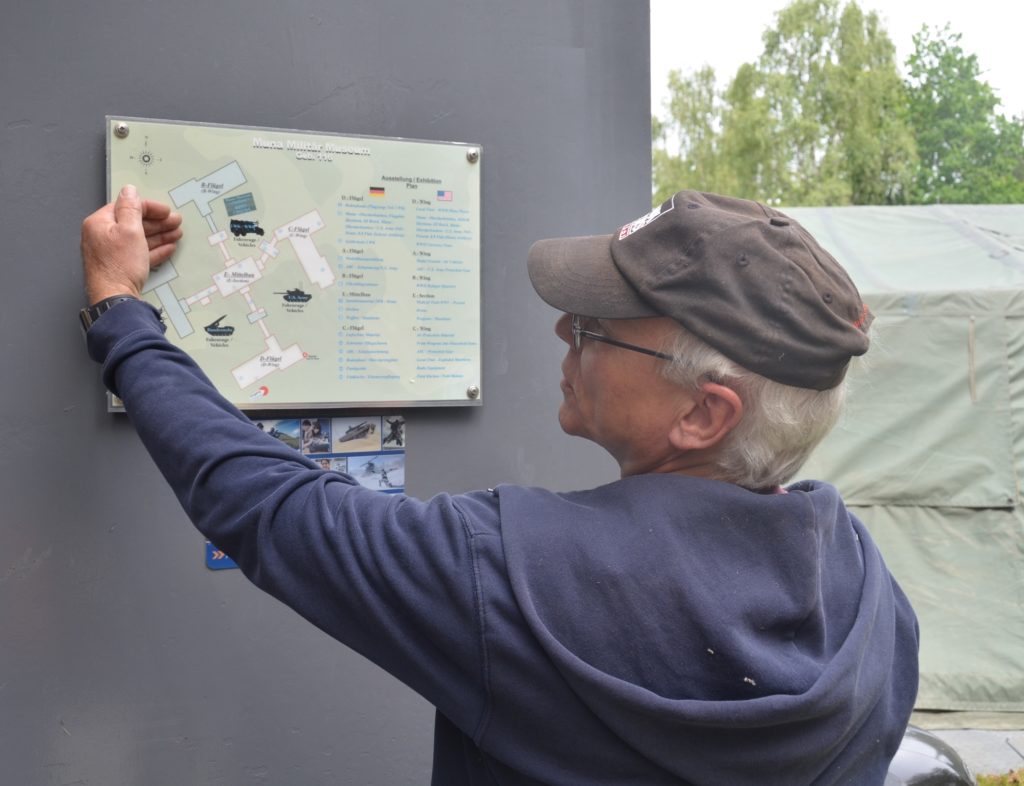 “My ambitions for the club are to show this off to the Americans, to the Soldiers, because I think it is important for them to know and to realize that their generation – however hard or difficult it might be to be a Soldier now, because the continuous deployments are a tremendous burden on the family – they are not the only ones in the U.S. Army’s history that had to sacrifice,” said De Boisbriand. “I think it is exceptionally important for them to realize what really happened and that it’s not only one-sided. On both sides the regular, everyday soldiers were captured into this thing, into a war, and were forced to fight for their country.”

De Boisbriand thinks the vehicles are especially important, because “they travelled through time, going back to at least World War II,” and give this generation of Soldiers an idea what the Army’s equipment used to look like.

“Years ago we had the large Reforger exercises every year, and you used to see these vehicles on the road and you could talk to the Soldiers,” De Boisbriand said. “That’s gone, it’s over… And this is why it is ultimately important for us to recover these vehicles, especially from the U.S. Army, before they get destroyed.”

He also believes there is a difference in the way Americans and Germans approach military history.

“Germans in general have a hard time discussing especially what went on during World War II, because some people feel ashamed or feel the guilt, even though there is no reason for them to feel guilty, while Americans are so much more enthusiastic about it.”

Visitors interested in the museum can stop by every first and third Saturday of the month for public opening hours. Once a year, the staff hosts an open house that draws more than 3,000 visitors on one single day, providing them with guided tours in both languages, entertainment for the kids and typical army food served from a field kitchen.

This year’s open house takes place Sunday, June 11 from 10 a.m. to 6 p.m. The museum volunteers will also schedule private tours to show their exhibition and educate their visitors about the military history in the Franconian Heights. To learn more about the Muna Museum, visit www.muna-museum.de. For more photos of the museum, visit the FLIKR album at https://www.flickr.com/photos/usagansbachphotos/albums/72157684745966026.