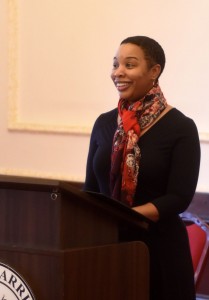 Turnage began her speech with a question: “Do you know what it is like to be denied what is right by law?”

Turnage told a story of two key events for the Civil Rights Movement: a landmark court ruling and a high-profile development in racial integration in public schools – each key opening another door for black Americans.

The first door opened May 17, 1954, when the U.S. Supreme Court’s unanimous decision in the Brown v. Board of Education ruled that state racial-segregation laws for public schools were unconstitutional. A second ruling furthermore directed that public schools be desegregated “with all deliberate speed” – a phrase Turnage repeated in her remarks.

Despite the rulings, desegregation still had its determined opponents. One of them was Orval Faubus, then-governor of Arkansas. After the ruling, the NAACP enrolled black students at schools throughout the south, including nine black students at Little Rock Central High School in Arkansas.

Their enrollment at Central High caused a stir among local segregationist councils. Faubus, siding with the councils, deployed the Arkansas National Guard to support them by blocking the nine students from entering the school. News coverage of the blockade, especially photographs, worked against Faubus and pushed the “Little Rock Nine” into the national spotlight.

By the end of that month, President Dwight D. Eisenhower had ordered the Army’s 101st Airborne Division to the Arkansas capital to escort the Little Rock Nine to class. Although the students continued to encounter racism at the school, they were through another door.

In some ways, Turnage’s situation was similar: She also attended a predominantly white high school in the American south. But times change, and Turnage’s experience with her classmates in the late 1990s was a world away from those of the Little Rock Nine.

“I didn’t encounter any racism during my years of schooling,” said Turnage, who graduated in 1998.

All of the Little Rock Nine found success in their lives in one form or another, especially in their pursuits of education and of educating and helping others.

Turnage went on to earn a Master of Science in Rehabilitation Counseling and a Bachelor of Science in Special Education, as well as education specialist degrees in school counseling and educational leadership. She said she also plans to pursue a Ph.D. upon the completion of her time here in Germany.

Turnage, whose parents, she said, “instilled in me to always smile and shine regardless of the challenges,” integrated the title of Crowns in remarking on one of her goals in life.

“Everyone has a voice,” said Turnage. “Therefore, I plan to utilize my crown to keep educational doors open for others.”

To read the related story about the Crowns excerpt performance during the observance, visit https://ansbachhometownherald.com/usag-ansbach-performers-give-preview/.