What may be the oldest North American team sport is now becoming big in Germany.

You might have already played this full-contact sport in the U.S. or attended a game. The good news is lacrosse is easier than ever to find right here in Germany to watch or play.

There is, for instance, a team in Würzburg that won the German University Open during the last two years back to back. The city itself is less than an hour drive north of Ansbach and is even closer to Illesheim. They welcome new players at any time.

Lacrosse has its origins in a game that was played by the indigenous people of North America to prepare for warfare. Tribes like the Cherokee or the Chippewa even called it Tewaraathon, which means “little brother of war” and dedicated it to the God of War.

In the late 19th century, the upper classes of North America adopted lacrosse to be played at colleges and, for many, this sport was most widely played by those with elite status. Therefore, not many people received the chance to actually play this sport.

The sport didn’t really become popular until the early 1980s. Since then, the original wooden sticks were replaced by aluminum shafts and synthetic heads. This made the sport affordable and more widely available to the general population.

The basic rules can be compared to hockey, because the setting of the field and goals is similar. To be able to take part in an official game, a complete set of equipment is needed. In this way, all players are allowed to tackle their opponent or even hit them with their lacrosse stick to get the ball. The winning team is the one that makes the most goals when time runs out. Every goal counts as one point.

Lacrosse is growing both in the U.S. and in other parts of the world.

The season opener of Germany’s Premier Lacrosse League took place Sept. 12 between Würzburg and Karlsruhe in Würzburg at the Beate Uhse Kampfbahn, but more games are scheduled. For more information on the game and the local teams of Würzburg, visit www.wuelax.de. 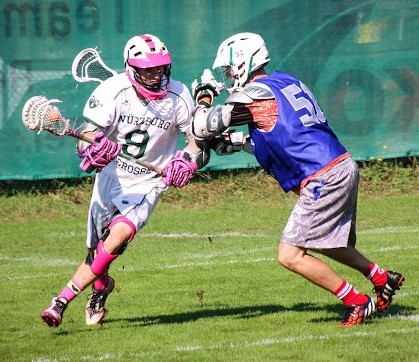 Opposing players come in contact during a game of lacrosse. Though lacrosse is an American sport, it is becoming increasingly popular here in Germany. (Photo courtesy of Würzburg Lacrosse)