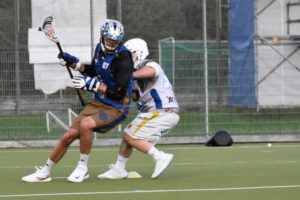 ANSBACH, Germany (Aug. 19, 2019) — Rachel Schwaab has been playing Lacrosse since she was five years old. Her position – attack, mostly on the crease.

An Environmental Engineer for U.S. Army Garrison Ansbach’s Environmental Management Division, Schwaab arrived in Ansbach a few weeks ago. She had already done her homework on the Nürnberg Wizard’s Lacrosse team and hit the ground running.

“I actually found the team via Google,” she said. “I left Norfolk, Virginia, just as some of my friends started a league for women and I was hoping they had something similar. Turns out, the opportunities for post-collegiate Lacrosse are more widespread here.”

Schwaab said her favorite part about playing with the team is getting to meet the other local athletes, and she hopes she can share some of the “lacrosse philosophy” she learned in the U.S. with her teammates, as they have shared theirs with her.

“Together, we have been working on developing new plays for the upcoming season, which has been really exciting,” she said.

Schwaab is not the only American from Ansbach playing for the Nürnberg Wizards.

With no previous experience playing Lacrosse, Grant met with some of the players to see if he would be able to join the team. The team welcomed him with open arms, he said.

“Everyone is so encouraging and helpful,” Grant said. “They took me aside the first two practices and taught me all the basics. It felt much like the ‘walk, crawl, run’ training and teaching the Army uses.”

Christopher Weindl helped cofound the Nürnberg Lacrosse Club in September 2012. He is also a team player and coach for the men’s team.

“Before the club, we mainly played in several ‘playing communities’ with Ingolstadt and then Erlangen to have enough people to play as a team in the Bavarian Division,” he said. “Since we became the Wizards, we have our own team with only players from our club.”

Weindl said the team usually has several American players from the surrounding areas. They also have players from Canada and France.

“I think it’s hard to find such a diverse group in the area,” he said. “So it’s pretty unique to have this many different teammates at practice, but still have one thing in common: playing Lacrosse. The diversity gives me the chance to learn about people and countries from their perspective.”

Weindl said the biggest contribution brought to the team by the American players is their experience and knowledge of the sport.

“Most of them played a long time in the states and had very good coaching. Having people to transfer that knowledge and showing how to do it helps us a lot to improve professionally,” he said. “Even those who started Lacrosse here can show some of my teammates how important it is to be in good shape and workout.”

The Nürnberg Wizards’ men and women teams play in Bavaria’s first division of the German Lacrosse Federation. The Wizards also have a new youth team, but they do not participate in the league yet.