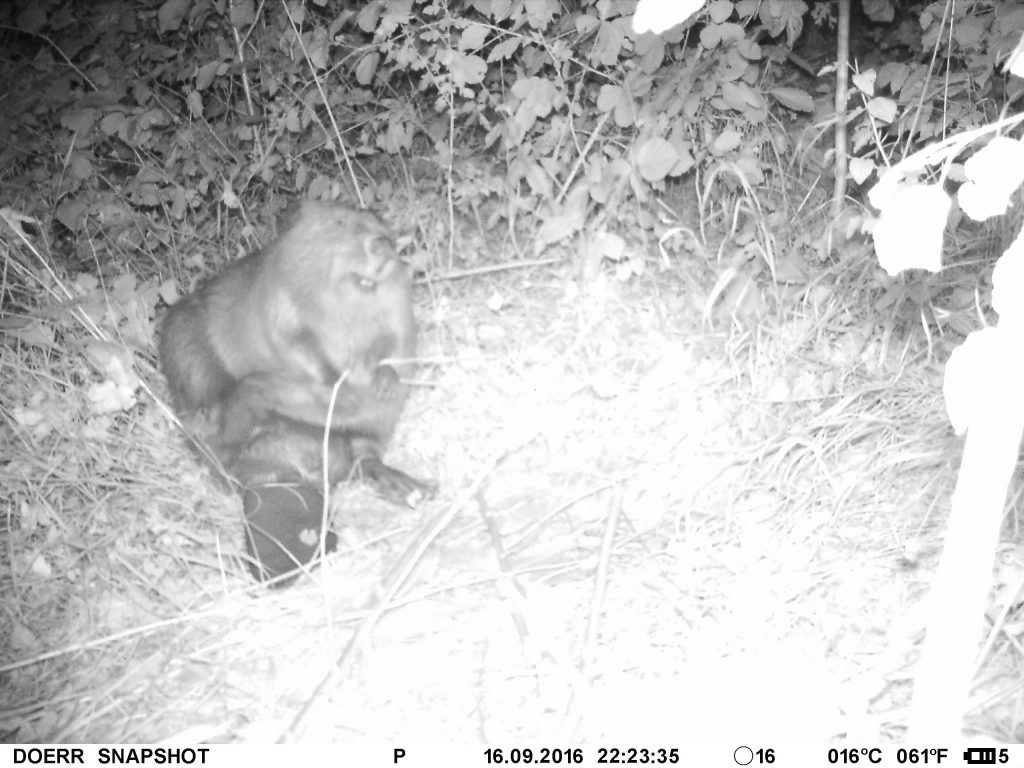 Pictured is the beaver who has made Soldiers Lake his residence — Klaus der Baumeister. This photo was taken with a motion-sensitive night-vision camera courtesy of U.S. Army Garrison Ansbach’s Directorate of Public Works.

It appears that USAG Ansbach’s neighborhood beaver, Klaus der Baumeister, has received an approved exception to policy and will remain housed at Soldiers Lake as a permanent resident.

It all began late last month when small trees near Soldiers Lake were found cut down. It was soon obvious the felled trees exhibited the telltale handiwork of a beaver, whom DPW has since named Klaus der Baumeister. Although beavers are a protected species in Germany, they are also very destructive.

Upon inquiry, the Directorate of Public Works received official notification from the German High Ministry of Beaver Conservation (not the actual agency, but something kind of like that). We were officially informed that we are not allowed to relocate Klaus off post – that Soldiers Lake is his new “Heimat” until he chooses to relocate, and we must accommodate him and his Baumeister actions.

During Mayor’s Day last week, I had an opportunity to brief many of the officials in the surrounding areas, and I informed them about our new resident. In turn, I asked if any of their cities or towns would like to welcome Klaus as their new resident. I got no takers, and one Bürgermeister told me his town has three beavers – and asked if we would take them.

As a result of this decree, DPW must now take action to not only accommodate Klaus but also work to mitigate any further damage that he would be responsible for.

You may have already noticed that we’ve installed some protective shields around some of the trees. We also have paint on order that will be applied to trees along the lake’s edge. Apparently, beavers don’t like the taste of this paint, and he’ll need to find other trees in the area for breakfast, lunch and supper.

So, if you happen to spot Klaus, please give him a warm Ansbach welcome!  For some reason, I feel that in the future Klaus may be planning a family. Oh, what fun!