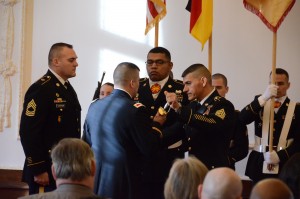 Kiefer’s career with the Army spans 30 years, from enlistment at Fort Knox, Kentucky, as an armor crewman in January 1986 to the final two years as a command sergeant major here at USAG Ansbach.

To signify he was relinquishing his responsibility as the garrison’s command sergeant major, Kiefer passed the Sword of the Noncommissioned Officer to Col. Christopher M. Benson, USAG Ansbach commander. During the retirement portion of the ceremony that followed, Kiefer passed on the sword to his visiting nephew, Airman 1st Class Chase P. Kiefer, telling him to “represent the Kiefers well.”

Benson spoke to the audience about Kiefer following the official relinquishment.

“How can you adequately honor a man who has devoted over 30 years of his life serving and defending his country in 10 minutes or less?” asked Benson rhetorically. “A man who served five combat tours and has served the last nine years as a command sergeant major, and a vast majority of his 21 other years in leadership roles.”

In addition to being stationed throughout the U.S. and Germany, Kiefer served tours of duty in Baqubah, Ramadi and Tikrit in Iraq during Operation Iraqi Freedom and at Regional Command East in Jalalabad, Afghanistan, during Operation Enduring Freedom. He served in support of Operation Desert Shield, Operation Desert Storm, Operation Vigilant Warrior and Operation Joint Endeavor. Throughout his career he earned the Legion of Merit, the Bronze Star, Meritorious Service Medal, the Order of St. Barbara, the Draper Armor Leadership Award and more. 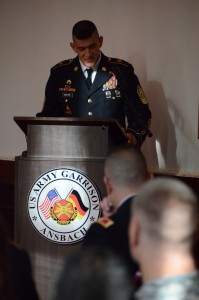 “I can’t accurately convey the tremendous impact he has had on our Soldiers, Families and civilians and on our Army or on our nation because I wasn’t there for 28 of those years,” said Benson. “But what I can tell you is that in his last two years here at USAG Ansbach, he’s earned the trust and respect of virtually everyone in this community. He’s brought credibility to his position and to this command.”

Kiefer assumed responsibility at USAG Ansbach in February 2014. During his tenure here he served also as the last command sergeant major of USAGs Bamberg and Schweinfurt. At the time Kiefer took responsibility at USAG Ansbach, he had not served as a command sergeant major of a garrison. During his remarks, Benson credited Kiefer’s success at the garrison level to his leadership style.

“His frank, common sense approach mixed with his character, intelligence and superb ability to communicate to others minimized gaps and brought understanding,” said Benson.

Kiefer thanked the garrison team, his family, and many others.

“Now I get to do the part I never wanted to do, and that’s to say goodbye as the garrison command sergeant major,” said Kiefer. “To the hundreds of civilian Army professionals that comprise USAG Ansbach, I want to express my gratitude for two of the best years I’ve experienced in my 30 years.”

“I know your legacy will live on in the thousands of lives you’ve touched in your career,” said Benson. “You’ve had a wonderful life, and there’s a lot more out there to live. I know you will never quit and you will continue to obtain great things.”

Kiefer concluded his speech by telling the audience what they might address him as in the future since he would no longer be a command sergeant major.

“When the sun sets tonight, you can call me Mark, Herr Kiefer, Mr. Kiefer, and I will even accept Ambassador Kiefer,” he said. “Army strong!”

To read this story as it appears on the Army News Service, visit www.army.mil/article/161391.

To see photos from the event and the farewell dinner, visit www.flickr.com/photos/usagansbachphotos/albums/72157663799883861.