ANSBACH, Germany (Oct. 1, 2021) – A ribbon cutting and rededication ceremony took place Oct. 1 to celebrate the completion of the renovations to the Katterbach Chapel at the U.S. Army Garrison (USAG) Ansbach.

“We ask your grace as we dedicate this facility to your honor and glory, grant that grace to our religious support team as we minister and serve our Service members, Army Civilians, local nationals and their families, our young and old representing all ranks, creeds, races and cultural backgrounds,” said Chaplain (Lt. Col.) Scott Bullock as he opened and set the tone for the ceremony with the invocation. 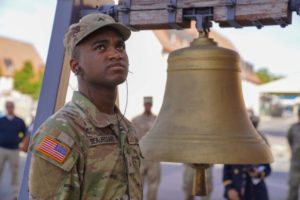 Immediately after the invocation, the chapel bell was rung three times to mark the beginning of the ceremony.

“The chapel’s renovation over the past 12 months enhances our mission capabilities and success. Worship, religious education and the practice of spirituality, which chaplains oversee and provide, are the elements of forced multiplication that we provide,” said Chaplain (Maj.) Paul-Anthony Halladay as he delivered the opening remarks.

“It’s really nice to come celebrate this project which took us so long to get here today,” said Col. Karen Hobart, USAG Ansbach commander. After nearly 10 years, with the renovation project dating back to 2012, the Katterbach Chapel work has officially come to a close.

Because of the need of a major renovation the previous work orders that had been requested could not be performed. They were then combined into a large project which was championed by the garrison chaplains.

Each chaplain that was assigned to USAG Ansbach since 2012 continued to push the project with a total cost of $1.5 million forward until completion this year. 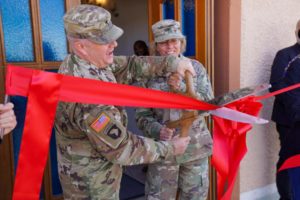 “This was a collaborative effort by many parties to achieve this outcome, after almost 12 months of conducting and hosting religious services temporarily at the gym” said Hobart.

The work could not have been completed without the help of the USAG Ansbach partners that contributed to the completion of the project, to include the German Bauamt (State Construction Office), contractors, and the Directorate of Public Works (DPW).

“We can now look back at several decades of our partnerships with the U.S. Forces stationed in Germany. A church is a special challenge, time and cost goals have been achieved and ultimately the construction was possible due to the constructive cooperation in the team where everyone pulled together,” said Josef Fiegl who spoke representing the German Construction Management Administration.

To end the ceremony, Bullock and Hobart cut the ribbon, marking the official reopening of the chapel, and all of the attendees joined together in singing “Amazing Grace” as the chapel bell rang again to close.