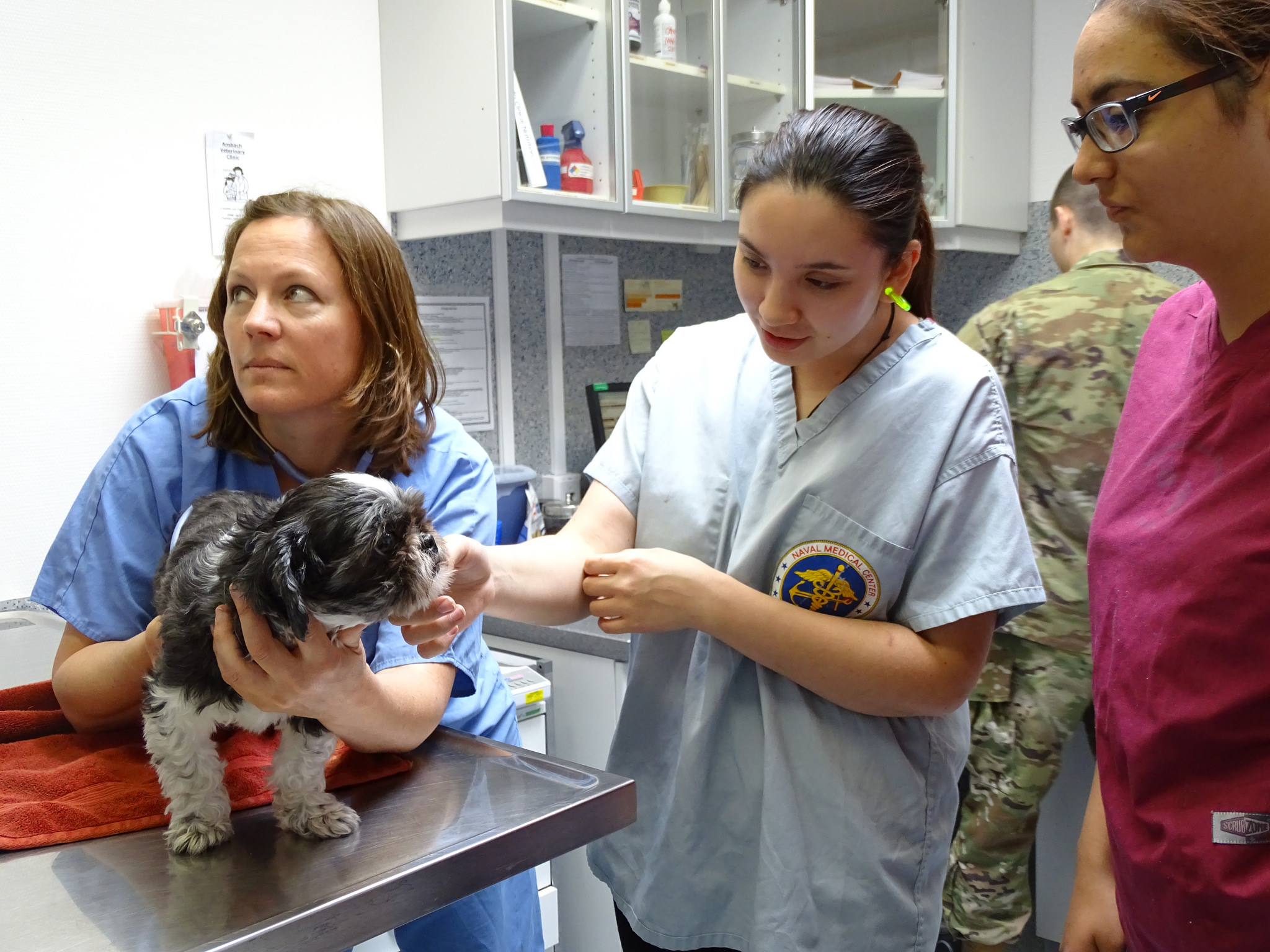 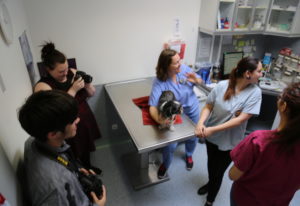 ANSBACH, Germany (May 18, 2017) – Cadets of the 9th Junior ROTC Battalion shadowed Soldiers and civilians on the job throughout U.S. Army Garrison Ansbach Tuesday.

The cadets, who are also students at Ansbach High School, learned about different careers they might pursue once they graduate from high school.

They partially experienced the workday lives of personnel at the Ansbach Army Health Clinic, of the U.S. Army Criminal Investigative Command, of the military police, at the Public Affairs Office, and at the Veterinary Treatment Facility.

Cassandra Ferguson and Arcelia Escobar shadowed veterinarian Dr. Sandra Brosig at the Ansbach VTF. Brosig hoped her cadets would “have objective information and understand what the job’s about.”

“It’s a very big job with big variety,” said Brosig. “We do preventive medicine care, we vaccinate the pets, we deworm them, we check to make sure they’re healthy, we issue health certificates. We also see sick patients, which have infections, organ failures, or some sort of metabolic failure. We also do surgery.”

“I want to see what the job actually entails,” said Ferguson. “There’s a lot of animal and life science related things I want to do in college, and I really wanted to see what I would have to go through and what it would take me into.”

Escobar, who is a senior ready to graduate from high school, wanted a peak into her possible future.

“Now that I’m almost in college – I’ve got 20 days left in school – I wanted to see for myself whether this is something I could handle,” she said. 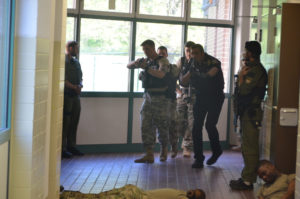 “It’s unfortunate within the day we cannot show them the whole broad spectrum,” continued Brosig. “They only get a limited view, but it is at least something.”

The career field itself extends beyond being a practitioner. Veterinary medicine can also include food facility inspection, pharmaceutical testing, and laboratory work. Brosig emphasized to her cadets that although the animals are cute at the VTF, the job means dealing with seemingly repulsive elements: bodily fluids, abscesses, waste products, and more. Other elements can be emotionally difficult for animal lovers.

“What they usually don’t think about, which is unfortunately part of our job, is euthanasia,” said Brosig. “That’s something that hit me the most when I became a veterinarian. Unfortunately at the end of caring you can do nothing else for them. Just to be humane is to let them go. It’s really something a lot of young students struggle with.

“You have to be very passionate about the job,” continued Brosig.

Cadets Ethan Galindez, Lane Brumley, and Dominik Moss shadowed Staff Sgt. Jonathon West, a Soldier with the military police. In addition to learning what a typical day is like for West, the cadets observed a joint training exercise between MPs and local national police simulating an active-shooter scenario at the former site of Rainbow Elementary School at Barton Barracks. 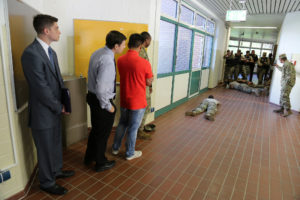 “I hope they understand the whole spectrum of the MP Corps,” said West. “I hope they take this – what they learn today, what they’re going to see today – and either they apply it to their future, see if it’s something they want to do. Maybe they want to do something else. But I hope this is enough for them to say ‘This is what I want to do later on in life,’ or ‘This is not for me.’”

The outcome of the experience of the day, according to the MP’s shadowing cadets, was significant.

“It gave me brighter and bigger options of what I could do and learn,” said Galindez. “It gives me a greater understanding of what I’m going to be putting myself into.”

Similar to Brosig’s intent to give her shadowing cadets a fuller understanding of the difficulties of the veterinary profession, West let his cadets know that being in the Military Police is also trying and difficult work.

“My advice to you is to take everything with a grain of salt,” West reminded his shadows. “Not everything is high-speed training and glimmer. There is some time when you’re going to be dirty, cold, wet, upset, but that’s the nature of the beast. That’s the whole spectrum of being a Soldier in the MP Corps. You’re a Soldier first and an MP second.”