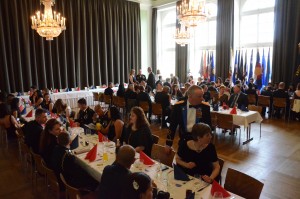 The guests take their seats before the ceremony.

Students from Ansbach High School, who are members of the JROTC, ran the event, which took place at the Orangerie in Ansbach, with guidance from Maj. Madonna Roberts, the senior Army instructor for the JROTC.

Members of the command teams from USAG Ansbach and the 12th Combat Aviation Brigade attended the ceremony.

The student leadership of the JROTC formed a receiving line to greet incoming guests. After all the guests were seated, the group performed several traditional ceremonial activities, including the separate table setting for the fallen Soldier, the posting of the colors, a toast, a grog ceremony and a cake cutting.

To see more photos from the event, visit the photo album here.

To see this story as it appears at the Army News Service, visit www.army.mil/article/165836.