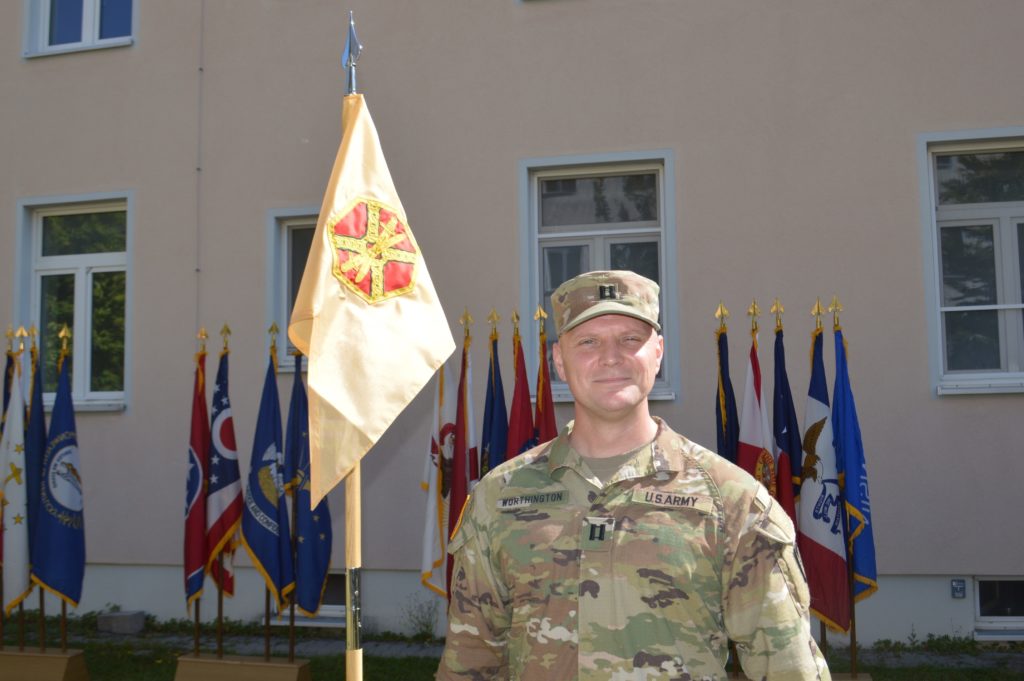 Story and photo by Dani Johnson

“HHCs are challenging across the Army, they comprise diverse MOS (military occupational specialties) and accomplish many missions,” said Col. Karen E. Hobart, USAG Ansbach commander and officiating officer for the ceremony. “The company commander is typically outranked by many of his formation.

“It is clear that Jason lives by the time-honored advice to ‘do the best job you can in every job you are given’.”

During Worthington’s tenure, he and his first sergeant, 1st Sgt. Antonio J. Soto, created the company mascot, the Jackalope. Hobart said, “enormously creative and appropriate given our rabbit community here in Ansbach.”

Beyond the mascot, the captain enabled the garrison to support the U.S. Army Europe deterrence mission by ensuring his Soldiers were ready and capable. His leadership techniques included safety and information briefings that provided context for company operations. In addition to required training, he developed staff rides to broaden Soldiers’ knowledge and he was active in the host nation by cooperating with Ellwangen Language School to provide HHC Soldiers opportunities to visit and practice English with German Soldiers, police, and civil servants as well as executing the annual German-American Marksmanhip Competition with the city of Herrieden.

“I feel like my time here is divided into two parts: before COVID and after COVID,” said Worthington. “Before COVID, I believe we had a pretty good run; our training, our staff rides, our host nation partnerships.

“After COVID, while many Soldiers throughout the Army may have slowed down or began teleworking, we know that the PMO (Provost Marshal Office), Garrison Chapel and Garrison Headquarters had to continue operations, and in some cases, were much busier,” the captain said. “I’m proud to have served with you.”

Worthington leaves Germany for an assignment with the 1st Security Force Assistance Brigade, Fort Benning, Georgia, as an intelligence officer. Soto will handle commander and first sergeant duties in the interim until the new company commander arrives.