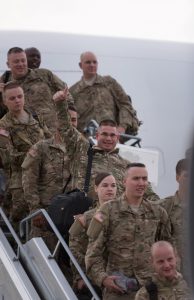 The Soldiers from 1AD CAB are in U.S. Army Europe as an augmentation or surge force to further enable 12th Combat Aviation Brigade during Anakonda 16. The surge force is comprised of ten UH-60M Black Hawk helicopters from Charlie Company, 3rd Battalion, 501st Aviation Regiment, key personnel from the brigade headquarters and elements of the 127th Aviation Support Battalion.

Support Soldiers from the 127th ASB will remain in Europe for 90 days. Aviation support battalions are the logistical lifeblood of a combat aviation brigade providing fuel, ammunition and transportation support.

The unit will initially operate out of Storck Barracks, Illesheim, Germany. The majority of the Soldiers and their helicopters will then deploy to participate in Operation Atlantic Resolve training exercises taking place in several NATO and partner countries throughout Europe.

This surge rotation is consistent with the Army’s Regionally Allocated Forces concept, aligning units to support theater requirements. Regional alignment is also synchronized with the Army’s new operational concept of winning in a complex world.

To read the story as it appears in the Army News Service, visit www.army.mil/article/166837.