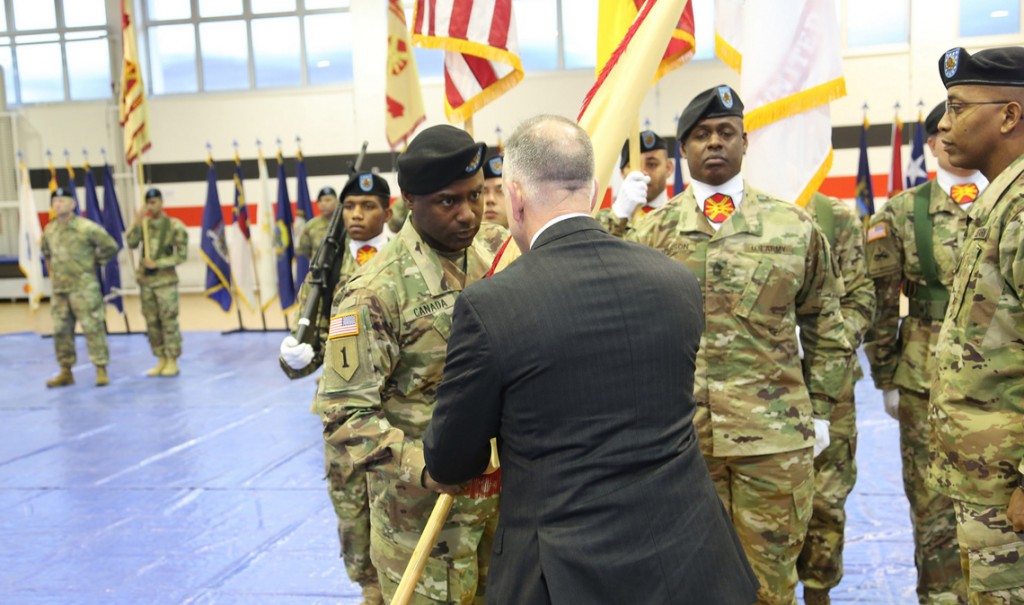 Canada brings with him an “invaluable combination of experience … he knows firsthand the types of support Soldiers and commanders need from IMCOM,” said Michael Formica, director of IMCOM Europe.

“His reputation for integrity and leadership,” Formica added, “is why I handpicked him as our senior noncommissioned officer.”

Coming from Fort Lee, Virginia, as the Ordnance Corps and School Personnel Development Office’s sergeant major, Canada has served for almost 30 years, with stints as the command sergeant major for IMCOM’s Army Environmental Command and the former U.S. Army Garrison Kaiserslautern. Additionally he has multiple combat deployments to Iraq.

Canada said he looks forward to being part of a team that is passionate about taking care of Soldiers, Army civilians and their Families.

“I am also excited about building and sustaining relations with all our Strong Europe teammates, our host nations and our communities,” he said while addressing an audience that included the IMCOM command team of Lt. Gen. Kenneth Dahl and Command Sgt. Maj. Jeffrey Hartless, along with Lt. Gen. Ben Hodges, commander of U.S. Army Europe.

Canada also thanked Montez for his support during the pair’s transition, encouraging him to stay in touch while he pursues his second career of service in Texas as a teacher.

Additionally, Formica noted that Montez’s return to the Lone Star state brings him closer to family, with a first grandchild expected this summer.

Saying he could not ask for a “better battle buddy,” Formica applauded Montez’s accomplishments, including:

“Command Sergeant Montez has been an enterprise leader,” Formica declared. “He has been our problem solver, one who builds consensus while leading folks to successful outcomes.”

As he closed out the ceremony with his remarks, Montez recalled that prior to becoming the IMCOM-Europe command sergeant major two years ago, he received a message from a former commander whose son had recently become a Soldier. The former commander said, if ever needed, that he would trust the life of his son in Montez’s hands.

The commander’s words, said Montez, reminded him “of the awesome responsibility we have as leaders. Not just to fight and win, but to genuinely care for the well-being of America’s sons and daughters. It is for this reason … that I am deeply humbled by the opportunities that I was given to serve. I am a Soldier for life”

To read this story as it appears on the Army News Service, visit www.army.mil/article/160815.