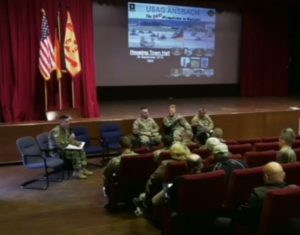 The town hall was live streamed to the USAG Ansbach Facebook page, which allowed community members who could not be present to engage with command teams in the USAG Ansbach footprint.
Col. Steven M. Pierce, USAG Ansbach commander, kicked off the event by discussing the Chief of Staff of the Army’s priorities and five quality of life focus areas, one of which includes housing.

“The Chief of Staff of the Army’s number one priority is people,” Pierce said. “The Army has continued its focus on housing since February when the housing crisis started. It started mostly in the United States … but it was an opportunity for us to look at how we take care of our housing. We learned a lot and I appreciate the continued feedback.”

Benson said mold and mildew continue to be an issue, and residents are required to air out homes twice a day to help prevent these issues from occurring.

“Residents need to ensure they are ventilating their quarters appropriately,” Benson said. “However, there are other cases where the mold is the result of leaking pipes or a leaking roof … we do have teams that can take a look at that.”

The Installation Management Command-Europe Air Conditioning (AC) Policy was also addressed.
“We have a new, revised air conditioning policy that was signed by the director of IMCOM-Europe on the fourth of September,” Benson said.

Under the new policy, garrison commanders can approve the use of portable AC devices in Army Family Housing. Requests must be written with justification and routed through DPW for endorsement and then to the garrison commander for approval.

USAG Ansbach continues to focus on short- and long-term efforts to resolve housing issues faced in the community and continues to encourage Soldiers and families to use existing reporting systems to request maintenance to their quarters.

Some ongoing and future efforts include:

A $3 million project for new windows, screens and rolladens is currently being planned. The design phase is scheduled to complete in September 2019 with phase 1 expected to begin in April 2020. Phase 2 and 3 is scheduled for fiscal year 2021.

A contract was awarded to remove and repair approximately 18 playgrounds on Katterbach Kaserne. Most of the wooden playgrounds will be removed because of safety concerns. The schedule for removal and repair has not been determined.

As part of the MakerSpace grant the Ansbach Library had three bicycle stands installed around the garrison. A MakerSpace provides library patrons the opportunity to create, collaborate, learn and imagine individually or with others. Many MakerSpaces focus on science and technology, but depending on the community, it might include arts created from recycled materials, music, or bicycle repair. The stands are available to everyone and located at the Library on Bleidorn, the Youth Center on Katterbach and the Von Steuben Community Center on Bismarck.

A new splash pad was opened on Bleidorn Kaserne, which features a motion sensor and was installed by the U.S. Army Garrison Ansbach Directorate of Public Works. The splash pad is available to all USAG Ansbach community members.

New tennis courts opened on Bleidorn Kaserne in U.S. Army Ansbach. The courts are open to all community members. Pets are not allowed inside.