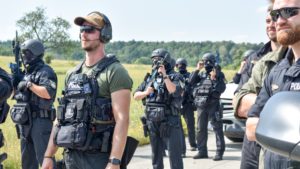 ANSBACH, Germany – At the end of their almost six months of training, 11 recruits of the Unterstützungskommando (USK) der Polizei Mittelfranken, the quick response unit for the German police force in Middle Franconia underwent their final training at the USAG Ansbach Oberdachstetten Training Area.

The USK forces are Bavarian police units that operate in high risk and potentially violent environments such as demonstrations, major soccer games, and raids such as storming of buildings to search and arrest dangerous and possibly armed suspects. The USK are also trained as first responders and some are trained medics, which means inherent medical capability within the unit. USK execute rapid response until a SWAT teams arrive.

Joerg Burkel, the lead instructor for the USK explained that the recruits were drilled and tested on all of the required training components during this final training at Oberdachstetten Training Area. “This training area has the advantage that we can cover all elements right here in one location,” he said. “Exercises include, pistol, machine pistol and assault rifle shooting skills, close combat training, physical fitness training on the obstacle course and tactical skills training such as knife attack, arrest and raid procedures as well as the tactical emergency medicine part.”

At the end of this qualifying, rigorous week, the recruits received a surprise. Through coordination with the 12th Combat Aviation Brigade, a CH-47 Chinook, also training at the training area, made a special landing for the USK unit. The pilots had periodically observed the training from above. The aircrew showed off their aircraft and answered questions. Chief Warrant Officer 2 Brendan Rall said “the CH-47 Chinook is the oldest aircraft of the U.S. Army, but also the most reliable.

“I am extremely impressed by the professionalism and discipline exemplified by the USK recruits,” said Rall. “It is clear that these young men have a great passion for their cou 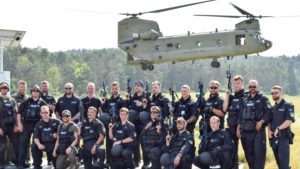 ntry and the safety for their fellow countryman.”

On this day, the Oberdachstetten Training Area proved itself to be a versatile, efficient location for training on the ground and in the air for Germans and Americans.

In addition to the normal requirements for police service, the USK has its own very high admission criteria. Officers applying to join the USK must be extremely physically and mentally fit. After the comprehensive selection process candidates undergo training that, among other things, teaches arrest tactics and techniques, shooting and weapons training, legal studies, psychology, offender behavior, tactical exercises, operational tactics and focus on combat and endurance.

All USK candidates passed the training. Outside of special operations or education and training, they will still support local precincts in their daily police duties and continue to serve on patrol, but they also have their USK equipment on hand. Although some of the officers wear “normal” uniforms, they can usually be identified as USK officers by a patch with the USK badge or sticker on their vehicles. The USK is said to be characterized by a determined and uncompromising demeanor.

That special badge coincidentally depicts the same as the 12th CAB patch: a griffin.