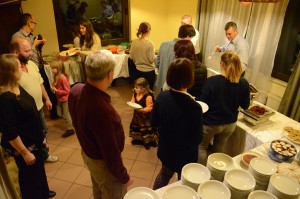 The event was held where the club meets every first Tuesday of the month, but included turkey prepared by the venue and members brought traditional Thanksgiving and Christmas side dishes.

American and local national members and their guests helped themselves to plates and visited with other members and guests in a relaxed atmosphere.

To read this article as it appears on the Army News Service, visit www.army.mil/article/159366.