German, US Soldiers gather for exchange of culture, more 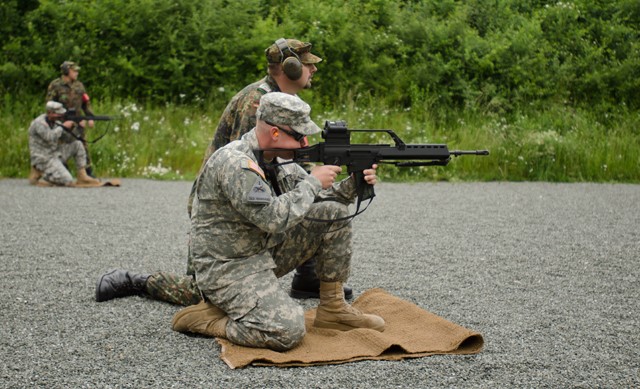 Many U.S. Soldiers that come to Germany are unsure of what to expect and how much, if any, real interaction they will receive from their German counterparts. Command Sgt. Maj. Paul G. Hutchings, command sergeant major for the now inactivated battalion, made sure that his Soldiers did not leave Germany with these questions still lingering.

According to Hutchings, this partnership began two years ago.

“They’ve come to our formals and all of our events,” said Hutchings. “So I thought to myself, I want to put a spin with this and make it a true partner exchange. They come and shoot on our range, and we go shoot on theirs.”

Upon arrival to Oberdachstetten, the German soldiers gathered into a classroom where they were given instruction on how to operate and fire the M4 carbine rifle. At the same time the 3-158th Soldiers broke off into groups of 10 to 15 Soldiers to begin training and qualification on the Heckler & Koch P9 semi-automatic pistol.

“I think the German soldiers enjoyed the activities with the U.S. Soldiers; they liked to cooperate, and there were many talks and discussions,” said bundeswehr Command Sgt. Maj. Winfried Kaller, the command sergeant major for the reserve unit.

The combined national marksmanship assessment continued at the Roth, Germany shooting range June 10, shortly before the 3-158th cased their colors. Soldiers of the 3-158th broke off into two firing groups for training and qualification on the Heckler & Koch G36 assault rifle.

“It’s funny. They really liked our weapons, and we really liked theirs. It’s (G36 assault rifle) smooth and I liked the trigger pull … there’s a lot of utility to this,” said Hutchings.

At the end of the day 37 3-158th Soldiers earned the coveted Shutzenschnur badge while 18 soldiers from the Bundeswehr earned their U.S. marksmanship badges. More importantly they learned a lot about each other.

“The biggest thing we exchanged was the exchange of culture. A lot of the young Soldiers got a rare opportunity to interact directly with their German counterparts,” said Hutchings.

To read the story as it appears on the Army News Service, visit www.army.mil/article/152324.