German May Day, full of customs and traditions 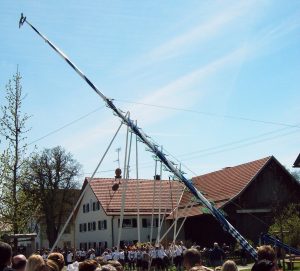 The Maibaum is set up with many helping hands. (Photo courtesy of Thomas Springer)

ANSBACH, Germany (April 21, 2016) – May Day marks the beginning of the outdoor and fest season in Germany and other European countries. Old traditions ring in the new season, as the residents celebrate the renewal of nature.

The night before May Day is known as Mainacht, when young men declare their affection for a young maiden, or as Walpurgisnacht, the night when – according to legends – witches fly on their brooms across the Brocken Hill in mid-Germany  to meet in a wild dance in the air.

Many local communities organize an evening dance, “Tanz in den Mai,” to celebrate the beginning of the warmer season; sometimes a May King and May Queen are announced at the fest.

In some villages the teens will play pranks on their neighbors, like taking their garden gates, benches or door mats, to hide or deposit them in a pile in a central location.

Another old tradition is the “Maisprung,” the May jump: a bonfire is built in a field and young couples jump together over the fire at midnight, literally jumping “into May.”

Rural communities often celebrate the first day of May by putting on a fest and raising a “Maibaum,” a Maypole. This is a tall wooden pole made from a tree trunk (pine or birch), adorned with colorful ribbons, flowers, carved figures, and various other decorations, depending on regional customs. In former times the tree was cut fresh during Walpurgisnacht; nowadays it is cut earlier, to allow time for cleaning and decorating.

The young men of a neighboring village may try to steal the Maypole prior to May Day, as part of tradition; therefore the tree has to be locked up and closely guarded day and night. If a tree has been successfully “kidnapped” (specific rules of non-violence and slyness apply), the original owners can buy it back for a ransom of beer and a “Brotzeit” (a light meal), which are usually consumed by both parties together, with a lot of mutual ribbing going on. 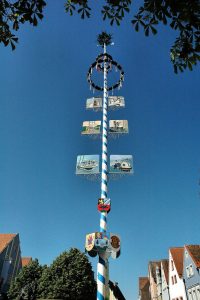 Since May Day is also an official holiday with schools, stores and businesses closed, people have time to enjoy a long hike or bicycle ride through the rolling hills and forests of their region; they will find rest and nourishment in an outdoor restaurant, or bring food and beverages along in a pull-wagon for a picnic.

May 1 is also observed as Labor Day in Germany. Unions and political organizations use the opportunity in the larger cities to stage rallies and demonstrations in order to raise awareness and support for their causes.