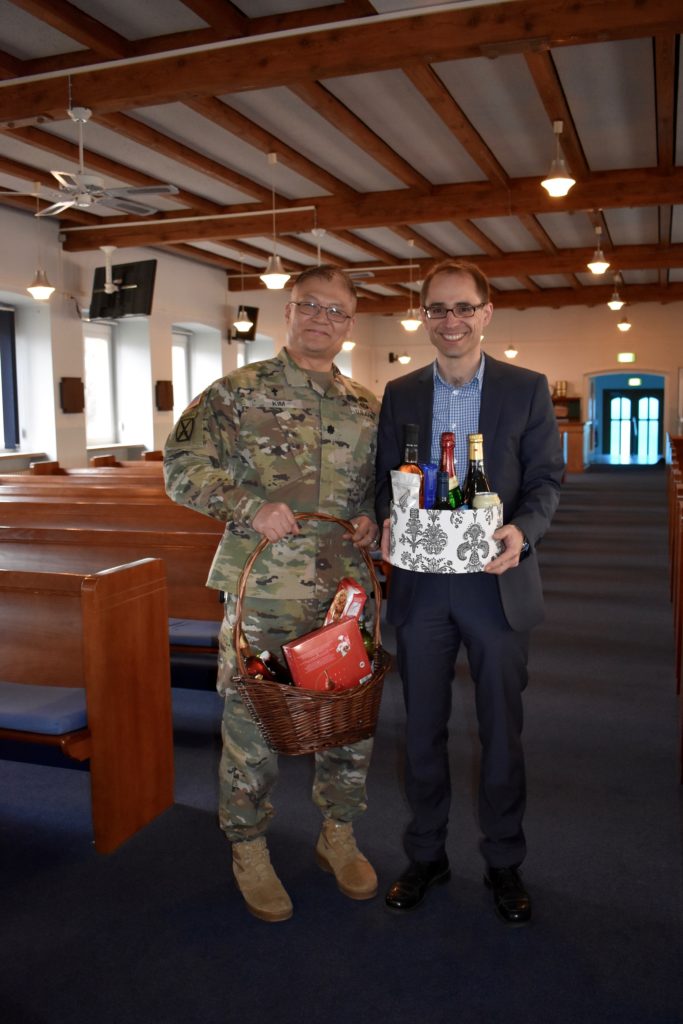 ANSBACH, Germany – A six-year-old German-American friendly exchange between U.S. Army Garrison Ansbach and the German Federal Language School (Bundessprachenamt) from Reinhardt-Kaserne in Ellwangen was renewed with a recent visit to the Katterbach Chapel. The outreach program was initiated when members of the garrison and and the Ellwangen Bundeswehr kept meeting at events hosted by their German partner city Herrieden, and started visiting each other on a regular basis in 2013.

When the last Bundeswehr units finally withdrew from Reinhardt-Kaserne in 2014, the only remaining federal entity was the Sprachenzentrum Süd, the Ellwangen chapter of the German Federal Language School (Bundessprachenamt), which is also part of the Bundeswehr.

Their German military chaplain, Stephan Aupperle, and Chaplain (Lt. Col.) Suk Kim, USAG Ansbach garrison chaplain, had previously conducted a religious service together in the Ellwangen school’s chapel in August 2018. Now it was time for a return visit. The Ellwangen delegation with 46 participants arrived at the Chapel during lunch time Feb. 21 and was welcomed by the Deputy to the Garrison Commander, Ms.  Kathleen Gavle, and Chaplain Kim, as well as other community members and volunteers.

Dr. Alexander Böhm, who represented the chief of the language school, Director Wolfgang Banek, addressed the attendees: “We often hear about such abstract things like declarations of friendship made by politicians … or about the intergovernmental relations of states. However, what we have been doing together now for many years is something real.” He added that “by showing our students how important it is to talk and to communicate, you help them, you help us, you help our countries to fulfill our mission to secure peace and freedom.” 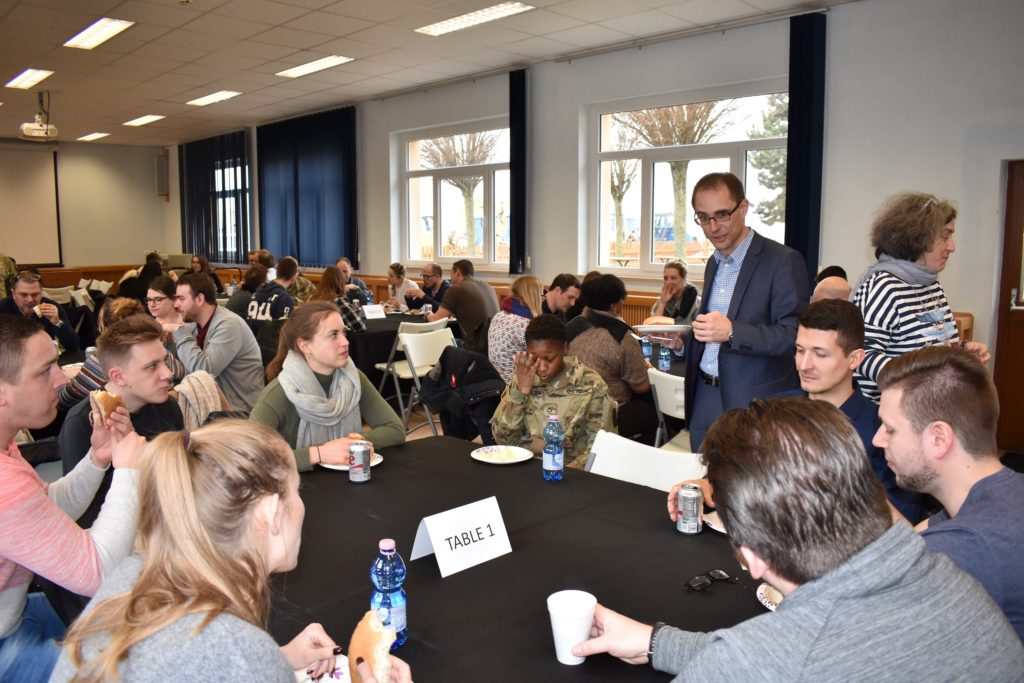 Dr. Alexander Böhm talks to a group of students and volunteers during their visit Feb. 21, 2019. (Photo: Bianca Sowders)

After the official welcome, the visitors were treated to a light lunch in the fellowship hall, where volunteers from the American side joined them for casual conversation. Lunch was followed by classroom sessions, where conversations were deepened and language aspects contemplated. As the afternoon concluded, everyone agreed that many joint future endeavors such as this one were in order.

The Bundessprachenamt is a higher federal authority that falls under the authority of  the German Ministry of Defense; since 2012 it is part of the Bundeswehr, the German Army. Its main task is instruction and training of translators and interpreters within the German service, teaching German to foreign service members, as well as translating and interpreting related foreign language material into German and vice versa.

To see more photos of the event, visit USAG Ansbach on FLIKR: https://www.flickr.com/photos/usagansbachphotos/albums/72157676845581517

To read about the Chaplain visit to Ellwangen in 2018, visit https://ansbachhometownherald.com/german-language-school-to-host-military-chaplain-for-service-in-english