OBERDACHSTETTEN, Germany (May 20, 2022)– In a large exercise with almost 400 participants, the Unterstützungskommando (USK) of the Middle Franconian police force, and police units from all of Northern Bavaria, conducted training May 17 at the U.S. Army Garrison (USAG) Ansbach’s Oberdachstetten Training Area.

The USK forces are Bavarian police units that operate in high-risk and potentially violent environments such as protests at major soccer games and raids such as storming of buildings to search and arrest dangerous and possibly armed suspects. The USKs are also trained as first responders, and some are trained medics, which means inherent medical capability within the unit. USKs execute rapid response until SWAT teams arrive.
In preparation of the upcoming G7 summit in Ellmau, Germany, near Garmisch-Partenkirchen, June 26 to 28, Middle Franconian police units once again turned to USAG Ansbach for use of the training area.
Joerg Burkel, the lead instructor for the USK described the advantages of the Oberdachstetten Training Area. “We can cover all elements of training right here in one location,” he said. “This particular exercise focusses heavily on riot control and dealing with protesters.”

As the Bavarian government explains: “In the past, the summits have always had a high mobilization potential for demonstrations and protest events by various groups. Based on current intelligence and existing security concepts, we are planning a total force of nearly 18,000 police officers at peak times. The deployment would not be possible without the support of the other federal states.”
German police units from throughout Northern Franconia, mounted police from Nürnberg and Munich as well as Emergency Medical Services and the USAG Ansbach Fire and Emergency Services participated in the exercise. In addition, USAG Ansbach community members had the opportunity to experience the action first hand, acting as protesters and rioters. USAG Ansbach Soldiers together with 12th Combat Aviation Brigade and deployed 1st Air Cavalry Brigade Soldiers from Storck Barracks, Illesheim, embraced their role as protesters refusing to leave a mock protest camp and fake-attacking the police forces with water bottles, sticks, and tennis balls – in lieu of rocks – while screaming and chanting alongside German police, who realistically performed as a riot crowd. 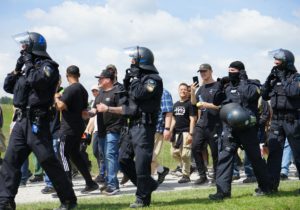 Realistic was also the riot control by the exercising USK units who stood firm against the rioters in full protective gear until support arrived by way of a water cannon and mounted police. Every role player was able to experience what it feels like to get drenched by the mobile police water cannon and then be pushed back and disbursed.

As Spc. Sebastian deSantiago, USAG Ansbach Headquarters and Headquarters Company, who volunteered, expressed, “What an awesome event. It is super exciting and fun to be outside and see how these guys show what they can do in a hostile environment. I did want to know what a water cannon really feels like.”