Army tri-signed letter: Full Integration of Women in the Army

The picture here is a copy of the U.S. Army’s letter on the full integration of women in the Army, signed by Eric K. Fanning, acting secretary of the Army, Gen. Mark A. Milley, chief of staff of the Army, and Command Sgt. Maj. of the Army Daniel A. Dailey.

Below is the text of the letter: 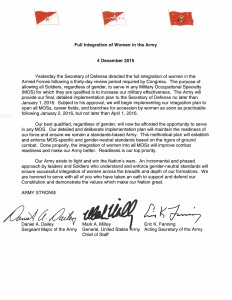 Full Integration of Women in the Army

Yesterday the Secretary of Defense directed the full integration of women in the Armed Forces following a thirty-day review period required by Congress. The purpose of allowing all Soldiers, regardless of gender, to serve in any Military Occupational Specialty (MOS) for which they are qualified is to increase our military effectiveness. The Army will provide our final, detailed implementation plan to the Secretary of Defense no later than January 1, 2016. Subject to his approval, we will begin implementing our integration plan to open all MOSs, career fields, and branches for accession by women as soon as practicable following January 2, 2016, but no later than April 1, 2016.

Our best qualified, regardless of gender, will now be afforded the opportunity to serve in any MOS. Our detailed and deliberate implementation plan will maintain the readiness of our force and ensure we remain a standards-based Army. This methodical plan will establish and enforce MOS-specific and gender-neutral standards based on the rigors of ground combat. Done properly, the integration of women into all MOSs will improve combat readiness and make our Army better. Readiness is our top priority.

Our Army exists to fight and win the Nation’s wars. An incremental and phased approach by leaders and Soldiers who understand and enforce gender-neutral standards will ensure successful integration of women across the breadth and depth of our formations. We are honored to serve with all of you who have taken an oath to support and defend our Constitution and demonstrate the values which make our Nation great.

To learn more, visit “SecDef opens all military occupations to women” at the Army News Service at www.army.mil/article/159473.