FPCON Levels, and knowing the difference 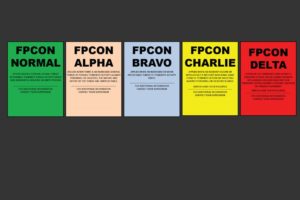 The U.S. Army Europe (USAREUR) commander delegates responsibility to general officers for force protection, known as the GOFPs. GOFPs are the lowest level of command within USAREUR authorized to change local FPCON levels.

When changes occur to FPCONs, garrison commanders are notified and immediately implement the FPCON changes.

WHAT IS AN FPCON?
The FPCON does two things to counter terrorists or other hostile adversaries:

1. It sets the FPCON level at Normal, Alpha, Bravo, Charlie or Delta.
Normal: Occurs when a general global threat of possible terrorist activity is possible. The minimum FPCON for U.S. Army commands is normal.

2. When an FPCON level is set, certain force protection measures are implemented. For example, if an Army garrison elevates to FPCON Charlie, you might see increased security measures at the gates, or even gate closures and the presence of additional security forces.

WHEN ARE FPCON LEVELS RAISED?

The FPCON levels are raised when a threat increases or if an attack has occurred.

HOW DO I KNOW THE FPCON?

The FPCON level is posted at each gate entrance and all entrances to garrison facilities.

HOW WILL I KNOW WHAT MEASURES ARE IMPLEMENTED AS THE FPCON INCREASES OR DECREASES?

While specific FPCON measures are not releasable in the interest of security, there are some key tips to keep in mind:

This article was modified from an article by Nathan T. Van Schaik published May 31, 2018, on army.mil; and U.S. Army Garrison Wiesbaden published Jan. 6, 2020, on dvidshub.net.