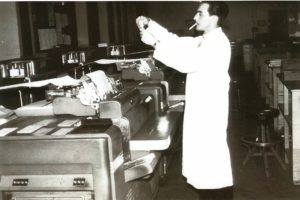 Working in the machine room (Photo courtesy of Roland Lutz)

ANSBACH, Germany – Some people are glad to walk away from a work place and never to return. For Roland Lutz, age 77, his three years working on Katterbach Kaserne as a young man more than 50 years ago was the best time of his working life.

After leaving for different employment in Stuttgart, Germany in 1961, Lutz said he had always dreamed of coming back one more time to see the building he worked in. “I guess, after so many years,  I feel a certain nostalgia when I think of that time,” he explained during his recent visit.

His work place, nick-named IBM building for the machines it housed, is now known as the post chapel. In 1959 Lutz started working in the so-called machine room, a room full of giant computers, which is now the chapel’s worship hall. In the chapel basement the coding and keypunching for the punch cards was done; this is where the mother of Roland Lutz was employed as one of the “keypunch girls.” 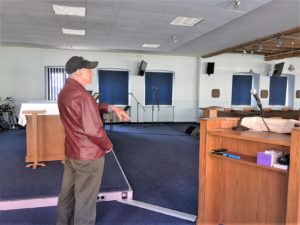 Lutz was one of 1,200 local nationals that once worked on Katterbach, then known as “The Depot.” The main occupant at the time was the European Exchange Service (now known as AAFES), which had its European logistic center there. “From here we shipped the goods all over Europe, to France, Italy and so on, via the rail head,” explained Lutz.

When employees found out that the exchange service was moving to a different location, many of them set out to find employment somewhere else. Lutz was sad to go: “We had such a great relationship among the employees, there was no envy and no competition, I never found that again later in life.” 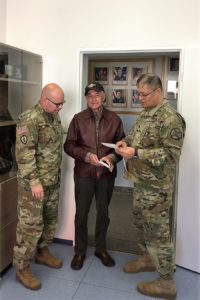 A visit with the chaplain (Photo by Bianca Sowders)

During his visit Lutz toured the chapel building, reminiscing about his days there. He also had an opportunity to chat with the current occupants, Chaplain (Lt. Col.) Suk Kim and Sgt. 1st Class Kristopher Norville, explaining the history of the building to them.

As he was enjoying a brief windshield tour of Katterbach, Lutz talked about the buildings he remembered and the condition of the airfield in his time. “Right after the war the airfield was littered with destroyed German airplanes. When I worked there, my friends and I would go out on the airfield during our break and pick up chunks of aluminum that were still laying around.” 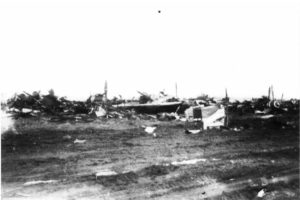 Katterbach and Bismarck Kaserne were both constructed at the same time and first opened  April 21, 1937 the “Day of the (German) Air Force”. The heliport had a reinforced runway and accommodated the Fighting Wing 53 “Legion Condor”.  Throughout the war, Katterbach remained the home for this unit and was never severely attacked. In 1945 elements of the 1st Infantry Division moved in, but stayed less than a year.  The heliport was then used as a depot by the European Exchange Service; by 1964 the first U.S. Army aviation unit was stationed at the heliport, the 349th Helicopter Company.  Since then the heliport has been utilized by different aviation elements, until it became the home of the 12th Combat Aviation Brigade. And the rest is history.