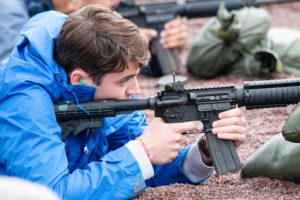 Philipp, this internship was advertised through U.S. Army Europe-Africa. The job description was held very general. Why did you consider it?

I found this job as an intern on coincidence but it immediately caught my attention. The job itself but also the environment here sounded awesome to me so I didn’t have to think twice when the option of doing this internship here was offered to me and I’m glad that I did it.

What was your first impression of your place of work at the U.S. Army Garrison (USAG) Ansbach?

The first day I arrived at the kaserne that I was told to come to, I didn’t really know what to expect. I have never been to the United States so all my knowledge comes from movies or TV shows. But when I walked into the building of the USAG Ansbach Command Group it really looked like one would imagine it. A lot of portraits on the walls showing the hierarchy of the garrison and flags and awards everywhere. One of the first things I wanted to learn were all the military ranks and being able to tell the meaning of the many different patches and it took me a while but it was worth it.

What were your duties at the Public Affairs Office, and were you able to learn new things you can use later on?

My tasks during the internship varied a lot which made it a very interesting stay for me. We did different interviews, for example with high school graduates or with winners of an E-Sports tournament. I got to attend all different kinds of ceremonies, ranging from a Change of Responsibility to a spring reception or a Change of Command. We also held the “Herrieden Shoot”, where German and American teams competed against each other with the M4-rifles over 25 meters. I was allowed to shoot as well which made an awesome experience. I got to edit and create pictures and banners in computer programs like Lightroom or Photoshop, which I found really useful and interesting.

Did you get to see more of the USAG Ansbach than the Public Affairs office?

My coworkers made sure to show me around and get me to see every part of the multiple facilities in Ansbach. I also got to inspect the different helicopters from the inside, which not many Germans can say. The weekly beer garden was a great opportunity to get in touch with Americans from different states and different job fields and learn more about the American way of living. The highly modernized gym was the place to get to see the American way of playing basketball, which is a little rougher than what I was used to, or lifting weights like real Soldiers.

What was your favorite experience and what surprised you most at the USAG Ansbach?

My favorites were the American fast food restaurants at the Exchange which can only be found in installations of the Army and not on the German economy. My internship here enabled me to see so many interesting things about working in a Public Affairs Office but also to acquire knowledge of how the people from the United States live here. The garrison feels like a village somewhere in the States with its own bowling alley, the commissary with all its awesome American products, the theater and especially the high school. It really surprised me that the kids of the Soldiers have their own American high school here and don’t have to attend a German school. The dining facility really surprised me as well, the food is awesome and way better than one would expect from a regular canteen.

Would you recommend an internship or even a permanent position at USAG Ansbach to your fellow students?

The Commander of the garrison gave me the job to talk to fellow German employees about communication issues and other concerns they have. This gave me a very good insight into the jobs of the blue collar workers but also the work in other directorates, like the Resource Management Office. I also did research to find ways to make young Germans apply for the multiple jobs the Army offers that are vacant at the moment. The US Army is a great employer but not many Germans know about all the possibilities that are offered here.

I would definitely recommend this internship to every German who wants to learn something about the work of a Public Affairs Office and the American culture in Germany. It was an awesome time and I enjoyed it a lot.

About the U.S. Army Europe-Africa intern program: USAREUR-AF is offering internships in multiple areas and disciplines; from Human Resources and Strategic Planning to International Relations and Media Relations – and many more. The target audience is high-performing Local National University students interested in sharpening their English skills and gaining practical work experience related to their program of study. USAREUR Local National Internships are categorized as voluntary, but will be compensated in accordance with German Social and Labor Law. Students must be at least 18 years of age and currently a full-time university student in Germany. A successfully completed background check which allows access to U.S. Army installations and possible DoD computer network is necessary. The program is designed to last three months (90 days).

To find out more about the U.S. Army Europe-Africa internship program, go to: