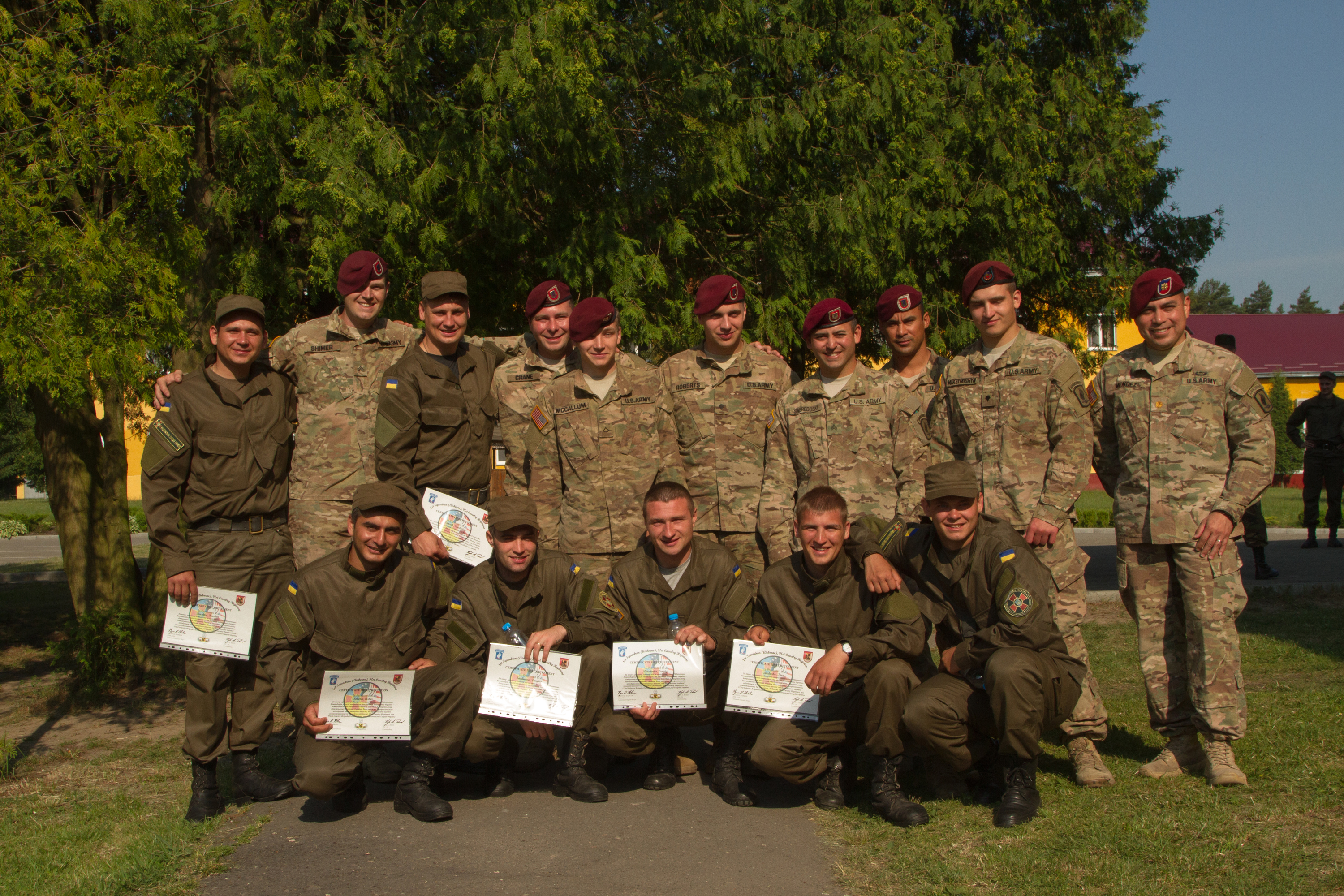 Paratroopers from the U.S. Army’s 173rd Airborne Brigade and soldiers from the Ukrainian national guard’s 3029th Regiment pose for a photograph during a Fearless Guardian graduation ceremony June 13, 2015, in Yavoriv, Ukraine. Paratroopers from the 173rd Abn. Bde. are in Ukraine for the first of several planned rotations to train Ukraine’s newly-formed national guard as part of Fearless Guardian, which is scheduled to last six months. (U.S. Army photo by Sgt. Alexander Skripnichuk, 13th Public Affairs Detachment)

YAVORIV, Ukraine – Paratroopers from the U.S. Army’s 173rd Airborne Brigade finished the first rotation of Fearless Guardian here with the graduation of more than 200 soldiers from the Ukrainian national guard’s 3029th Regiment June 13, 2015.

The paratroopers are in Ukraine for Fearless Guardian at the request of the Ukrainian government to train several battalions of the newly-established Ukrainian national guard. The training is expected to last six months. Fearless Guardian is the name for the Congressionally-approved, Departments of State and Defense initiative under the Global Security Contingency Fund-Ukraine.

A graduation ceremony was conducted to mark the end of training for the 3029th Regiment soldiers.

“We have trained together, we have experienced things over these last eight weeks,” said Lt. Col. Kyle Reed, the commander of 1st Squadron, 91st Cavalry Regiment, 173rd Airborne Brigade. “We are sure that the soldiers in this room are ready to deploy into the rigors of combat, in the defense of Ukraine.”

During the ceremony several soldiers were recognized for outstanding performance, such as best physical fitness scores and outstanding leadership.

Paratroopers have spent more than eight weeks here training soldiers from the Ukrainian national guard, beginning with individual soldier skills including movement techniques, marksmanship skills and first aid. The soldiers progressed to squad and platoon-level exercises with the use of live ammunition, requiring the guardsmen to work together.

“The soldiers have been very motivated and have performed at or above the standards,” said Capt. Matthew Carpenter, commander of Troop B, 1st Sqdn., 91st Cav. Regt., 173rd Abn. Bde. “I am confident they are ready to face the challenges ahead of them.”

After the graduation paratroopers and guardsmen shook hands and took photos with each other before going their separate ways.

“This was an experience I will never forget,” said Sgt. Jesse Shimer, a paratrooper with the 173rd Abn. Bde. “Training these soldiers, knowing that we are making a difference.”

Soldiers from the Ukrainian national guard’s 3005 and 3001 Regiments were already arriving to begin the next rotation of Fearless Guardian as the 3029th Regiment said its goodbyes. The next rotation will incorporate much of the same training from the first rotation with some changes requested by both American and Ukrainian partners to further enhance the quality of training.

To read the story on its original page, click here.