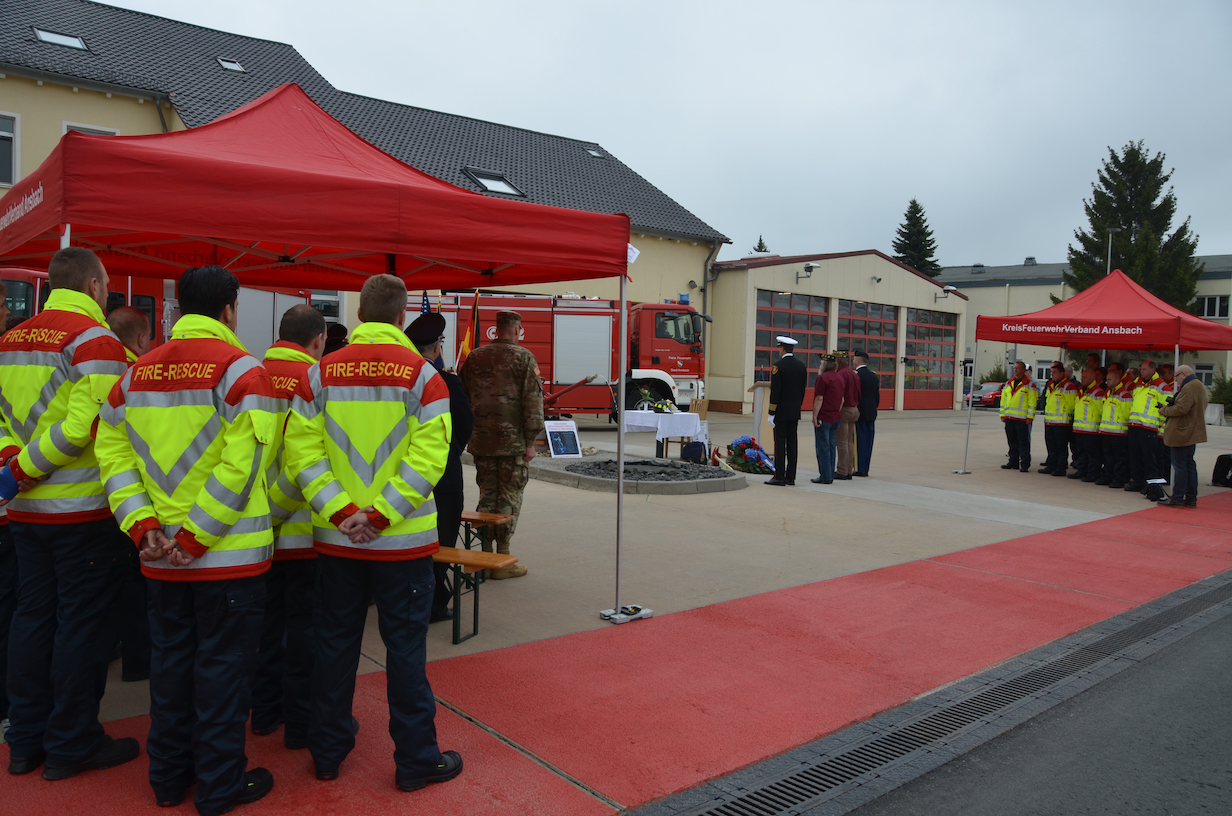 ANSBACH, Germany (May 5, 2017) – Fire and Emergency Services of the U.S. Army Garrison Ansbach Directorate of Emergency Services held a memorial ceremony in observation of International Firefighters’ Day Thursday, at the Katterbach Kaserne Fire Station. Firefighters from both the garrison and the city of Ansbach attended the event.

The impetus for a day recognizing the bravery of firefighters came about following a wildfire in Australia that claimed the lives of a firefighting crew of five. Matthew Armstrong, Stuart Davidson, Chris Evans, Jason Thomas, and Garry Vredeveldt were fighting a wildfire in Linton, Victoria, when a sudden shift in wind caused the blaze to overtake them. JJ Edmondson, a volunteer lieutenant, firefighter, and friend of the deceased firefighting crew, started a campaign to recognize all firefighters. May 4 was chosen because it was also the day of St. Florian, who in hagiology is the patron saint of firefighters.

“Firefighters dedicate their lives to the protection of life and property,” said Lt. Col. Ryan Dickerson, the director of Emergency Services, during his remarks. “Sometimes that dedication comes in the form of countless hours of volunteer service over many years. For others it comes in many selfless years working in the fire industry. In all cases, it comes with the risk of the ultimate sacrifice of a firefighter’s life.” 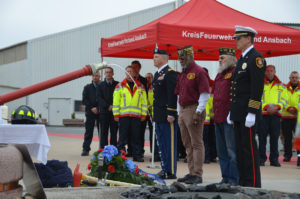 Members of the USAG Ansbach Directorate of Emergency Services and Veterans of Foreign Wars lay a wreath in commemoration of the sacrifice many firefighters make.

Stefan Groetschel, the chief of Fire and Emergency Services for the garrison, was on hand during the ceremony to lay the ceremonial wreath. He thought the presence of host nation firefighting personnel important.

“We train together, we are together during emergencies, it’s very important to respect each other,” said Stefan Groetschel, chief of Fire and Emergency Services for the garrison. “Even though we wear different uniforms, we have the same interests, the same intent to rescue lives and save property.”

“We support and assist each other in the fight against fire,” said Dickerson. “Language and uniform are not what matters, but what matters is our trust in the firefighter next to us during the response.”

Dickerson, Groetschel, and members of the Veterans of Foreign Wars laid a wreath at the display in front of the fire station.

Following the ceremony, members of the VFW held a barbecue cookout, and attendees ate lunch in the fire station.