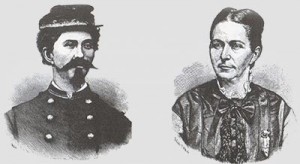 This illustration depicts Loreta Janeta Velazquez and her alias, Lt. Harry T. Buford of the Confederate States Army. Courtesy of the Library of Congress. (Courtesy illustration)

For the layout version of the newsletter, select HHM Newsletter Week 4 05 – 15 Oct.

Below is the text from the newsletter:

During the American Civil War, like other ethnic groups of Americans, Hispanics were divided in their loyalties, fighting heroically for both the Union and Confederate armies. Most Hispanics integrated into Regular army or volunteer units, although some served in predominantly Hispanic units with their own officers. Hispanics were especially instrumental in protecting the southwest against Confederate advances.

A very unusual historical figure was a woman named Loreta Janeta Velazquez, who was born in Cuba. During the war, she masqueraded as a Confederate soldier using the name of Lt. Harry T. Buford, enlisting in 1860 without her soldier-husband’s knowledge. According to her controversial biography and the confirmation of others, she fought fearlessly at the battles of Bull Run, Ball’s Bluff and Fort Donelson, but was detected in New Orleans and discharged. Loreta Velasquez re-enlisted and fought at the Battle of Shiloh until rediscovered. She spied in both male and female disguises and her bravery in the Civil War showed extraordinary courage and commitment.

Her biography can be read in the book, “The Woman In Battle: A Narrative of the Exploits, Adventures, and Travels of Madame Loreta Janeta Velasquez, Otherwise Known as Lieutenant Harry T. Buford, Confederate States Army,” edited by C.J. Worthington, 1876. It should be mentioned that some men of her generation refute her case, arguing that it was impossible for a woman to hide her body and womanly ways. The arguments have been countered by men and women who say that the Soldiers of the time could maintain privacy and bathed alone using buckets of water when possible. Such accounts make for interesting debates of the Civil War.

Richard Edward Cavazos (born Jan. 31, 1929), a Korean War recipient of the Distinguished Service Cross as a first lieutenant, who advanced in rank to become the United States Army’s first Mexican-American four-star general. During the Vietnam War, as a lieutenant colonel, Cavazos was awarded a second Distinguished Service Cross. In 1976, Cavazos became the first Mexican American to reach the rank of brigadier general in the U.S. Army. Cavazos served with great distinction for thirty-three years, with his final command as head of the U.S. Army Forces Command.

Latinos are the youngest of the major racial and ethnic groups in the U.S. At 27 years, the median age of Latinos is a full decade lower than that of the U.S. overall (37 years). Among Latinos, there is a big difference in median age between the U.S.-born (18 years) and foreign-born (40 years).

To see the previous newsletters on Hispanic Heritage Month, visit: