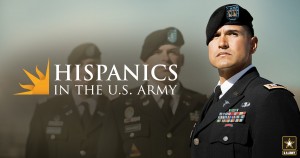 Courtesy image from the U.S. Army

For the layout version of the newsletter, select HHM Newsletter Week 3 28 Sep – 02 Oct.

Below is the text from the newsletter:

Generations of Hispanics have shaped and strengthened the fabric of the United States since its inception. Hispanics have enriched every facet of our national identity with traditions that stretch across centuries and reflect the many ancestries that comprise the Hispanic/Latino community. They have exerted a profound influence on our country through their strong commitment to family, faith, hard work, and public service. They have enhanced and shaped our national character with centuries-old tradition.

Recently, President Barack Obama corrected a historical act of discrimination when he awarded the Medal of Honor to 24 Hispanic, Jewish and African-American veterans who were passed over because of their racial or ethnic backgrounds. It is one of the largest Medal of Honor ceremonies in history.

Notable and influential Hispanics include Captain Manuel J. Fernandez Jr., who flew 125 combat missions during the Korean War. His 14.5 victories placed him among the top U.S. Air Force aces of the two world wars and the Korean War combined.

Richard E. Cavazos, a Korean War recipient of the Distinguished Service Cross made military history as he is appointed the U.S. Army’s first Hispanic four-star general.

To learn more about the contributions of the Hispanic / Latino communities, look for next week’s newsletter.

Everett Alvarez Jr. (born December 23, 1937) is a former U.S. Navy commander endured one of the longest periods as a prisoner of war (POW) in American military history. Alvarez was the first U.S. pilot to be downed and detained during the Vietnam War and spent more than eight years in captivity; making him the second longest-held American POW after Army Col. Floyd James Thompson. Alvarez is the recipient of the Silver Star, two Legions of Merit, two Bronze Star Medals, the Distinguished Flying Cross, and two Purple Heart Medals. Alvarez has co-authored two books, writing of his prisoner of war experiences in Chained Eagle and Code Of Conduct. Everett Alvarez High School in his native Salinas, California, is named after him. There is also a park named in his honor in Santa Clara, California, and a post office named in his honor in Montgomery County, Maryland. Alvarez retired from the U.S. Navy with the rank of commander in 1980.