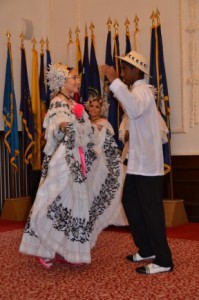 For the layout version of the newsletter, select 20150922 HHM newsletter 2.

Below is a text from the newsletter:

Many Hispanics have contributed greatly to the American culture. Physicist Luis Walter Alvarez left his post at the Massachusetts Institute of Technology to join the Manhattan Project to develop the first atomic bomb. Ritchie Valens became the first Hispanic rock star with his hit recording “Come On, Let’s Go.” He also is the first Mexican American rocker to be featured on American Bandstand. Valens is considered the first Latino to successfully cross over into mainstream rock. Venezuelan shortstop Luis Aparicio becomes the first Hispanic American in U.S. professional baseball to be named Rookie of the Year.

For more information, look for next week’s newsletter!

In May, a 12-man Special Forces reconnaissance team was inserted by helicopters into a jungle west of Loc Ninh, Vietnam, to gather intelligence about enemy activity. After arriving, the team met heavy enemy resistance, and requested emergency extraction. Helicopters attempted to extract them but were unable to land due to intense small-arms and anti-aircraft fire. Staff Sgt. Roy Benavidez heard the radio appeal for help and boarded a helicopter to respond. Realizing that all the team members were either dead or wounded and unable to move to the pickup zone, Benavidez directed the pilot to land at a clearing. Armed only with a knife, he jumped from the helicopter carrying his medical bag and rushed to help the trapped patrol.. Before reaching the team, he was wounded in his right leg, face, and head. Still, he repositioned the stranded team, and directed their fire to facilitate the landing of the extraction aircraft. Despite his severe wounds and under intense enemy fire, he carried and dragged half of the wounded team members to the awaiting aircraft. As the battle intensified, he recovered the body of the dead team leader and the classified documents on him. Benavidez was severely wounded in the abdomen by small arms fire, and by grenade shrapnel in his back.

People of Mexican origin account for two thirds (34 million) of the nation’s Latinos. Those of Puerto Rican origin are the next largest group at 4.9 million (with another 3.5 million on the island of Puerto Rico). There are five other Hispanic origin groups with more than 1 million people each: Cubans, Salvadorans, Dominicans, Guatemalans and Colombians.

The USAG Ansbach Hispanic Heritage Month observance takes place from noon to 1 p.m. Oct. 14 at Katterbach Fitness Center. Yanna Rodriguez, director of resource management, is scheduled to deliver the keynote address. There will be cultural food and entertainment at this free event.

Visit your local library, located on Bleidorn Kaserne or Stork Barracks, to check out the vast selection of books and movies and learn more about those individuals and groups who had a large impact in the Hispanic-American Culture!