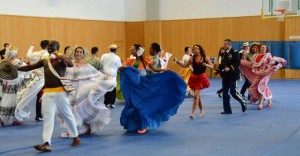 For the layout version of the newsletter, select HHM Newsletter Week 1 15-18 Sep.

Below is a text from the newsletter:

America’s diversity has always been one of our nation’s greatest strengths. Hispanic Americans have long played an integral role in America’s rich culture, proud heritage, and the building of this great nation. This year’s theme invites us to reflect on Hispanic Americans’ vitality and meaningful legacy in our Nation’s cultural framework.

As World War II set in, many Latinos enlisted in the U.S. military – proportionately the largest ethnic group serving in the war.

Macario García becomes the first Mexican national to receive a U.S. Congressional Medal of Honor, yet was refused service at the Oasis Café near his home in Texas.

For more information on this article, stay tuned for next week’s newsletter!

Dr. Hector Garcia Perez (Jan. 17, 1914 – July 26, 1996) was a Mexican-American physician, surgeon, World War II veteran, civil rights advocate, and founder of the American G.I. Forum. As a result of the national prominence he earned through his work on behalf of Hispanic Americans, he was instrumental in the appointment of Mexican American and American G.I. Forum charter member Vicente T. Ximenes to the Equal Employment Opportunity Commission in 1966, was named alternate representative to the United Nations in 1967, was appointed to the United States Commission on Civil Rights in 1968, was awarded the Presidential Medal of Freedom, the nation’s highest civilian honor, in 1984, and was named to the Order of St. Gregory the Great by Pope John Paul II in 1990. In 1998 he was posthumously awarded the Aguila Azteca, Mexico’s highest award for foreigners, in a ceremony in Corpus Christi, Texas.

The U.S. Hispanic population now stands at more than 54.1 million, making them the nation’s second-largest racial or ethnic group. Today Hispanics make up 17 percent of the U.S. population, up from 5 percent in 1970.