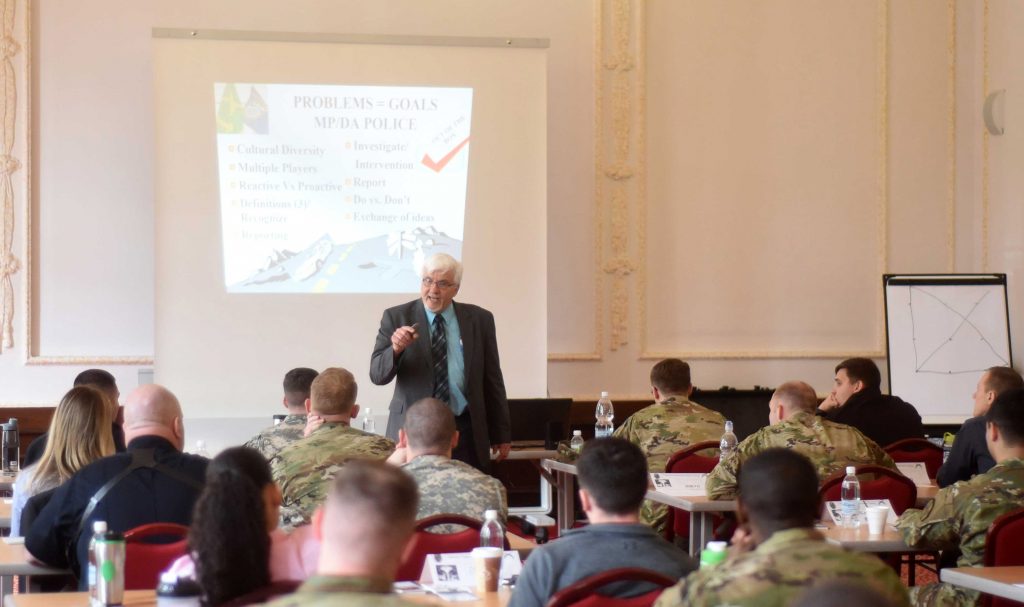 Leading the training was Larry A. Maxwell, instructor/trainer from the U.S. Army Military Police School at Fort Leonard Wood, Missouri. Maxwell typically conducts between 20 and 30 DVIT courses like this one for U.S. military personnel all over the world annually.

Maxwell started his class by defining domestic violence, how the cycle of violence works, and the psychological aspects and behaviors of both the subject – the abuser – and the victim.

“What are some of these hidden signs and symptoms that we look for?” Maxwell asked. “Because everybody sees the bruises. But as we talk about domestic violence or family violence, their injuries are to the what? – the mind, the body and the soul.”

Depending on the situation, what is called domestic violence or family violence may be describing one or more patterns in a range of physical or social or other abuses – and, therefore, would not simply result in a charge of “domestic violence,” which Maxwell said the UCMJ doesn’t have. The actual charge might be assault, for example, but the overarching concept of domestic violence is no less important to take into account.

Maxwell works in the MP School’s Behavioral Science Education and Training Division because addressing domestic violence requires the examination of the behaviors of both the victim and the subject. He said the term “domestic violence” has firm roots in the field of social work because domestic violence itself is a social problem and one that affects communities both off post and on post in many of the same ways.

“When you really think about it, if you take a community like Fort Bragg [in North Carolina] and you take the city of the same size, you’re going to find the same amount of domestic violence, because this is a social problem,” Maxwell said. “This isn’t unique to the military. A lot of the civilian training conferences that I’ve been to are exactly what I’m teaching.”

Key differences do exist, however, such as with the UCMJ. With the help of a representative from the Ansbach Law Center, the course covered the legal aspects of domestic violence that are unique to the military. Capt. Paul Bess, administrative law attorney, was slated to speak to attendees for four hours on the subject. Due to class interest and an abundance of questions, Bess spoke for five and a half hours – answering questions on subjects such as same-sex partnerships and what legal charges fall within the family violence arena.

The course continued into the week with nonviolent crisis intervention. This portion of the course covers responding to verbal arguments and identifying possible ongoing abuse, if any exists. The next day covered responding to violent calls, while the last day included identifying and confronting elderly abuse, and then hearing from a victim of domestic violence. Maxwell said by inviting a victim to speak, law enforcement personnel and other first responders can hear firsthand how their peers handled the victim’s situation, and what they did well and what they could improve on.

Maxwell said his class also delves into what happens after law enforcement handles a domestic violence case. Here, he talks about “transitional compensation.”

“This is what we offer a victim if the subject – if the abuser, who is a service member – gets chaptered from the service,” said Maxwell. “A lot of times, a victim doesn’t report because … why? The financial reasons. So, we actually have a good financial program where we offer them transition – where they get the money until they get feedback.

“One of the tactics of an abuser is isolation,” he added. “They don’t let that Family member know of the resources they can go to get help. The most important part of protection is to know, what can that family advocacy manager do for them?”

“What I’ve seen since I’ve been here is victims not knowing that the resources are available,” said Finley.

Victim advocates, who provide nonclinical advocacy services to Soldiers and Family members in domestic violence situations, are on call 24/7 to provide “crisis intervention, safety planning, nonjudgmental support, assistance in securing medical treatment for injuries, information on legal rights and proceedings, and referrals to military and civilian resources.” Victim Advocacy Services offer both a restricted reporting option, which has no official investigation or command involvement, and an unrestricted option with an official investigation. More information is available at www.myarmyonesource.com/FamilyProgramsandServices/FamilyPrograms/FamilyAdvocacyProgram/TipsfortheHome/Default.aspx.

As Family Advocacy Program manager, one of Finley’s main goals is to educate the community about domestic violence, specifically how to prevent it, identify it and handle it. This latest training for first responders is Finley’s third time having Maxwell as a guest in Ansbach.

“The course was relevant,” said Finley. “It builds their confidence and gives them information on what to do and how to handle difficult situations to keep themselves safe and to stop the violence from escalating.”

Finley said courses like DVIT help strengthen the community’s trust in the military police. This training, she said, increases awareness and helps ensure that people who are in these situations can get help.

“They can call the military police,” said Finley, “and know that something will be done about it.”

For a list of emergency numbers, visit www.ansbach.army.mil/EmergencyNumbers.html or https://ansbachhometownherald.com/emergency-numbers/.