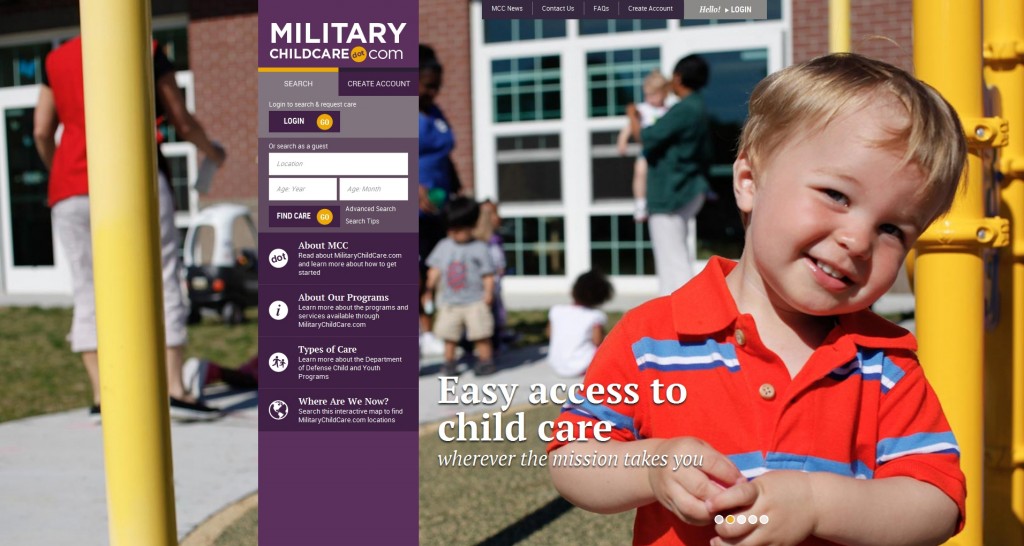 FORT SAM HOUSTON, Texas (April 4, 2016) — Ansbach is scheduled to join other Army installations as they start transitioning to a new single-portal Department of Defense website designed to make it easier for Soldiers to find the child care they need.

In March 2016, select Army garrison families began using www.MilitaryChildCare.com as their website to search for and request child care services where they are or where they are planning to move.

“The vital function of this website is to simplify the child care search process, helping patrons make better informed decisions about their child care needs,” said Theresa Sanders, the Installation Management Command Child, Youth and School Services Outreach Services program manager. “The DoD has worked hard to develop a system which allows patrons to create their own account, search and request care, manage requests and update their profile from the convenience of their home.”

Using MilitaryChildCare.com, parents can find comprehensive information on child care programs worldwide, conduct a customized search for the care they need, and submit a request for care at any time from any location, Sanders said.

Web services were first tested in pilot programs throughout the military branches including at U.S. Army Garrison Hawaii.

Each garrison is working directly to notify the families affected and assist in the implementation of the DoD website roll-out.

“We expect the implementation of this new website to be seamless,” said Sanders. “Those families already receiving child care services will continue to receive those services without interruption. Those whose name is already on a waiting list will be entered on the new website.”

More details will be available at Parent Central Services at each garrison.

According to officials at the U.S. Army Installation Management Command, the Army will continue its roll-out in June with 28 new garrisons, including Forts Benning, Bliss, Buchanan, Bragg, Carson, Gordon, Hamilton, Hood, Jackson, Leavenworth, Leonard Wood, McAlester, McCoy, Polk, Riley, Rucker, Sill, Stewart; Detroit, Picatinny, Pine Bluff, Redstone and Rock Island Arsenals; Anniston and Tobyhanna Army Depots; Carlisle Barracks; West Point; and U.S. Army Garrison Miami. Specific dates of access will be announced locally so that all Soldiers and care-givers will be aware of the timing of the change and how it will impact their family.