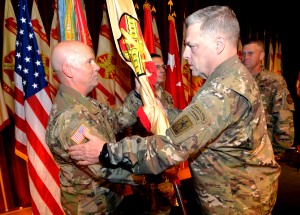 Gen. Mark A. Milley, the 39th Chief of Staff of the Army, presided over both the change-of-command ceremony and Dahl’s promotion ceremony that took place before.

“K.D. (Dahl) is immensely qualified to be the commanding general,” said Milley. “He’s a proven combat leader, he’s a man of great character, and I have no doubt in my mind that he’s going to take IMCOM to the next level of excellence.”

Until today, IMCOM and the Office of the Assistant Chief of Staff for Installation Management were commanded by one three-star general, in a “dual-hatted” status. The creation of a new 3-star position and the decision to make IMCOM a direct-report to the Chief of Staff of the Army indicates how important the mission is to senior Army leadership.

IMCOM manages all the day-to-day infrastructure and support programs on Army installations, allowing the mission commanders to focus on their mission: to fight and win the nation’s wars. It also allows for cost avoidance and cost savings by centralizing management and purchasing power, and enables Soldiers to focus on preparing for the current and future fight because they know their families at home are being cared for.

Dahl pledged that IMCOM would continue to provide the best support for command teams at Army installations around the world under his command.

“Having never served at the same place twice I can be justly accused of being an expert at nothing, but I will give myself credit for knowing a lot about the Army. Knowing where it lives and knowing what it does,” said Dahl. “And I’m excited to be at this command for I have an opportunity to support all our senior commanders and enabling their critical missions that they execute in their own commands every single day.”

Milley explained that the split will allow IMCOM to be more efficient by placing a proven leader with the command on Fort Sam Houston, rather than have the ASCIM lead from the Pentagon remotely.

“The span of control was not as effective as if we could split it apart and pick a single (lieutenant general) to lead IMCOM and then have a staff officer as the ACSIM,” said Milley. “Because putting both of them together is difficult and doesn’t lead to the most efficient methods of using our leadership.”

In Army tradition, Halverson relinquished command by passing the unit’s colors, which symbolizes command, to Milley, who then passed the colors to Dahl, giving him the authority of command and formally recognizing Dahl as IMCOM’s commanding general.

Halverson expressed his sentiments of leaving command and taking the responsibility of the ACSIM.

“This is a bittersweet day as you all know, but it is a great day for the Army,” said Halverson. “It’s been an honor. Thank you for bringing the Army’s home everywhere and we’ll continue to do that.”

Dahl assured Halverson and those present that he would ensure IMCOM would continue to be the foundation for Army readiness.

“We will touch the entire Army every single day and everything that it does,” said Dahl. “I am thrilled to be the commanding general of installation management command. I totally appreciate how lucky I am and I will not squander a single moment.”

For more information about the installation management command and the services it provides to the Army, visit www.imcom.army.mil or www.army.mil/imcom.

To read this story as it originally appeared on the Army News Service, visit www.army.mil/article/158139.