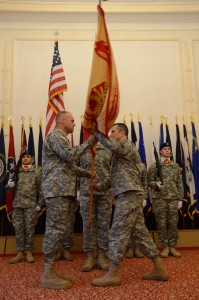 Benson addressed the audience during the event. He recounted many of the dramatic changes USAG Ansbach has faced, from the closures of USAGs Bamberg and Schweinfurt in 2014, through the enactment of the Aviation Restructuring Initiative in 2015, to the new missions of supporting rotational aviation units at Storck Barracks and supporting installations in East Europe.

“It is vitally important that we have a command sergeant major who has the experience and abilities to help us through these times and maintain our standing,” said Benson.

“This combat engineer,” continued Benson, referring to Cuvellier, “has served and led at every level in diverse units in varied locations and environments.”

Benson went over many of Cuvellier’s responsibilities as the garrison’s command sergeant major.

“He will ensure Army standards are maintained in the garrison, across commands and throughout the community, and always with the best interests of the Army and community at large in mind,” said Benson. “As my senior enlisted adviser, he will provide perspective of the Soldiers and Family members that will help us make the best decisions possible for the good of the Soldier, the Family, the unit, the community and the Army, while helping resolve issues at the lowest level possible.” 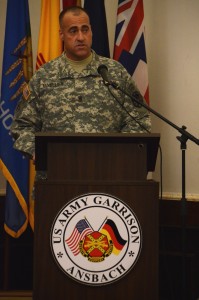 Cuvellier speaks during his assumption of responsibility ceremony.

Cuvellier spent part of his career in Hanau, Germany, which he called “some of the most exciting and best years of my career.”

“I am honored and humbled to be your garrison command sergeant major,” said Cuvellier during his remarks. “I’m sure I will be lost over the next few months, but I am eager to learn from all of you and grow relationships within the community.”

To read the story as it appears on the Army News Service, visit www.army.mil/article/162479.