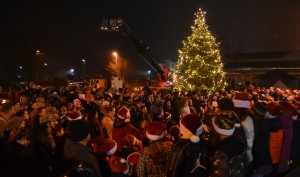 In the lead-up to the lighting of the tree, the Ansbach Elementary School choir sang, the chaplain spoke, the USAG Ansbach commander made a few remarks, and Santa Claus arrived in a fire engine to help throw the switch.

“This tree-lighting, an annual event here at our garrison, is all about being a community, which means caring for where you live and reaching out to help one’s neighbors,” said Col. Christopher M. Benson, USAG Ansbach commander, during his remarks. “This sense of giving is at the heart of our community. It happens when an Army Family helps another Army Family in need. It happens when a BOSS Soldier volunteers their Saturday to help build a dog park or rake up leaves.”

On-post Family readiness groups and more set up booths at the event to sell cooking and crafts. The Directorate of Family and Morale, Welfare and Recreation, who spearheaded the event, had a trailer selling Glühwein (a spiced mulled wine traditionally served in Germany at this time of year) and Kinderpunsch (Glühwein’s alcohol-free alternative). Another stand outside sold hot chocolate. And another stand outside sold the ingredients for making s’mores and had a fire in a brazier for roasting the marshmallows on spits.

The U.S. Army Europe Band sent their brass quintet to play holiday standards at the event.

Many more booths were set up inside the new fitness center selling nachos, chili, donuts and many other foods and beverages. Several crafters sold arts and crafts there as well.

For the children, there was a spot where they could write letters to Santa, decorate gingerbread cookies, play in bounce houses, listen to story time, and tell their wish list to Santa Claus.

To read this story as it appears on the Army News Service, visit www.army.mil/article/159547.