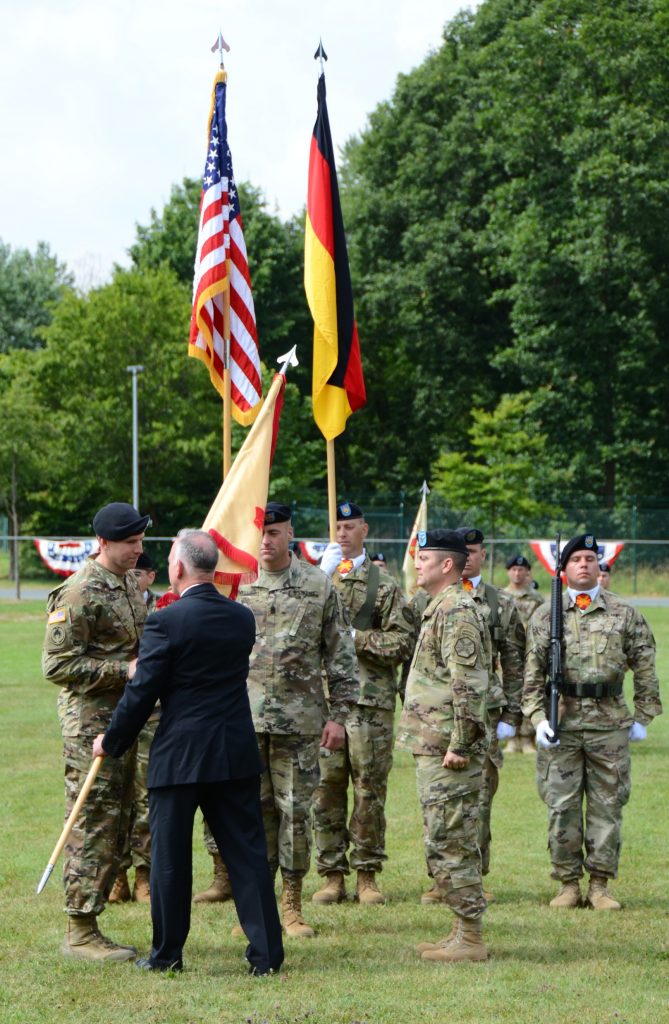 A retirement ceremony for Benson, who concluded his 25-year career with the Army and three-year tenure at USAG Ansbach, followed the change of command ceremony. 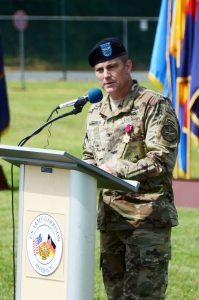 “I have much to be thankful for,” said Benson at the ceremony. “Today I relinquish command of the best hometown in Europe, U.S. Army Garrison Ansbach, and it’s been the best and most rewarding and most meaningful job in all my life.”

When talking of Benson’s accomplishments, Formica spoke of Benson’s qualities that helped him excel as a leader in the Army.

“Chris has always exemplified the finest qualities of an Army officer,” he said of Benson. “He led from the front, he led by example, and he led with compassion. He understood that the final responsibility of Soldier and Family care falls on the shoulders of leaders, and he never hesitated in leading.

“U.S. Army Garrison Ansbach is a better place because Chris Benson’s commitment to all who live here,” continued Formica.

Benson also spoke about his career in the Army. 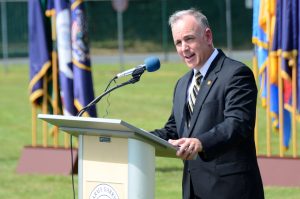 “Today I also effectively retire — at least in this capacity — from the greatest organization in the world, the United States Army,” said Benson.

Benson passed the garrison guidon to Formica, who then passed the guidon to Jones, thus signifying the passage of command from one colonel to the other.

Jones, the new commander, spent the previous year as the director of communications of Special Operations for Joint Task Force Afghanistan. Before then he was at the U.S. Army War College in Pennsylvania.

“He’s impressed me with his ability to grasp some of the complexities of the garrison already,” said Benson at a recent garrison employee all-hands meeting.

“Ben’s multifaceted background will provide value here,” said Formica of Jones. “He brings a global perspective from past deployments in Europe, the Pacific and Southwest Asia. His assignments include a tour at the joint staff level, and he knows everything about being a leader from platoon leader and now through being a garrison commander. Having participated in numerous multinational operations, Ben is well suited for the Strong Europe mission. That is why he was selected as this garrison’s commander.”

“I am confident you are the right person to lead USAG Ansbach, and I’m happy for you, your Family, and this garrison,” said Benson. “I know you are going to do great things for this community, and I know your Army profession 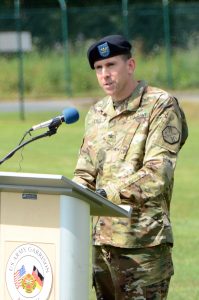 als will support you and that they will impress you with their dedication and professionalism, just as Franconians do.”

Jones also spoke at the ceremony.

“I am proud to be part of the IMCOM — Europe team, and I will work hard to ensure that the Ansbach garrison community remains a great place to work and live,” said Jones.

“Our installations are where Army readiness begins,” said Formica. “They deliver programs needed by warfighters to remain mission capable. They are force enhancers that support combatant commanders. They are where children grow and Families become resilient.”

“Thank you for all you have done to maintain and improve this garrison, and your dedication, and for being such a great ambassador for the U.S. military through your engagement in the surrounding Franconian communities” said Jones to Benson during the ceremony. “I will do my very best to carry on the tradition of service that you have demonstrated through your time in command.”

Upon first taking command of the garrison in 2013, Benson spoke of the positive reputation of USAG Ansbach.

“Everyone we’ve spoken to who has ever lived here before has relayed nothing but wonderful things about Ansbach and Middle Franconia — particularly its people, its beauty and its charm,” he said in 2013.

Benson led the garrison through many significant changes during his command.

Ansbach, as the direct reporting garrison of the Franconia Military Community, oversaw the final closures of USAGs Bamberg and Schweinfurt in 2014. During the transition of these installations to German control, Formica, during the ceremony attributed significant savings for Installation Management Command thanks to Benson’s leadership.

“Overcoming significant challenges, he managed an early closure of garrisons Bamberg and Schweinfurt and the relocation of more than 20,000 Soldiers, civilians and Family members,” Formica said. “In doing so he saved IMCOM over $30 million dollars per year, and by turning them in early an additional $4.5 million for Fiscal Year 2014.”

With the announcement of European Infrastructure Consolidation, the garrison began planning for the closure of Rainbow Elementary School in 2015 and the eventual closure of Barton Barracks by 2021.

Also in 2015, the Department of Defense announced the restructuring of the 12th Combat Aviation Brigade, USAG Ansbach’s main tenant unit, which, with the concurrent mission of providing housing and other facilities at Storck Barracks for rotational aviation units, meant significant fluctuations in the on-post population.

In June, USAG Ansbach began assuming responsibility of base operations at Mihail Kogalniceanu Air Base in Romania and Novo Selo Training Area in Bulgaria as part of Eastern European Site Support.

“If you think about what we’ve done in the past three years, it’s pretty amazing,” said Benson to USAG Ansbach employees during a recent all-hands meeting. “I don’t think any other garrison has gone through the ups and downs that we have throughout the world.

“Change is the one constant, and if we don’t adapt, we die,” continued Benson. “Through all those challenges, you handled all of them extremely well.”

Benson spent much of his change of command speech thanking members of the community, including the garrison workforce.

“I spent the last week or so relaying my personal thanks to our garrison workforce, the Army professionals who work so hard to keep this garrison running,” said Benson. “Thank you for what you do every single day to deliver the best possible support, programs, and services to our Soldiers, Families, and all our community members.”

Benson also thanked everyone involved in the U.S. Army’s mission in Europe.

“To all our mission partners, no one — Soldier, civilian U.S. or German, garrison, 12th CAB, or any other unit organization — could do it alone,” he said. “All of us together share in the challenges and successes of the garrison. Your success is our success and vice versa.

“To our German friends, from our mayors to our local law enforcement, from restaurant owners and staff to our landlords, neighbors, friends and German Family members, you have extended yourself both personally and professionally to build cooperation and trust,” continued Benson. “The friendships many have had here will last a lifetime, and your open invitation to Americans at a wide range of events have made Franconia a home for us just as it is for you.”

Finally Benson thanked his Family, including wife Kellie, during the ceremony.

“Kellie, you raised our kids almost singlehandedly” said Benson. “You are an incredible mother and wife. I thank you for your understanding, love and support for the past 25 years.”

During the ceremony, Formica also spoke of Kellie Benson.

“Her passion for community support greatly improved the quality of life for all who call Ansbach home,” said Formica. “And Kellie knows a little something about calling some place home. As a military spouse she moved 15 times during Chris’s career.

“She understands what sacrifice and service mean, which is why she is being honored today as well,” continued Formica.

Benson’s plans after retirement include staying in Germany.

“An opportunity lost is never regained, so we decided to retire rather than return to the states for another assignment,” he said during the ceremony. “Nowhere have we felt more at home than here in Franconia, and we don’t even sprechen Deutsch, at least not yet. Thank you all for making us and all our U.S. personnel feel so welcome in your towns and villages.”

Benson, in addition to saying goodbye to the USAG Ansbach workforce Friday during the all-hands meeting, also bid farewell during the garrison’s quarterly hail-and-farewell event, which welcomes new employees and says goodbye to those soon to leave. On Saturday, he also participated in the Herrieden Altstadtfest, the old town festival for the nearby town of Herrieden.

For more photos from the ceremony, visit the photo album in the “Related Links” section on this page.

To read the story as it appears on the Army News Service, visit www.army.mil/article/171674. 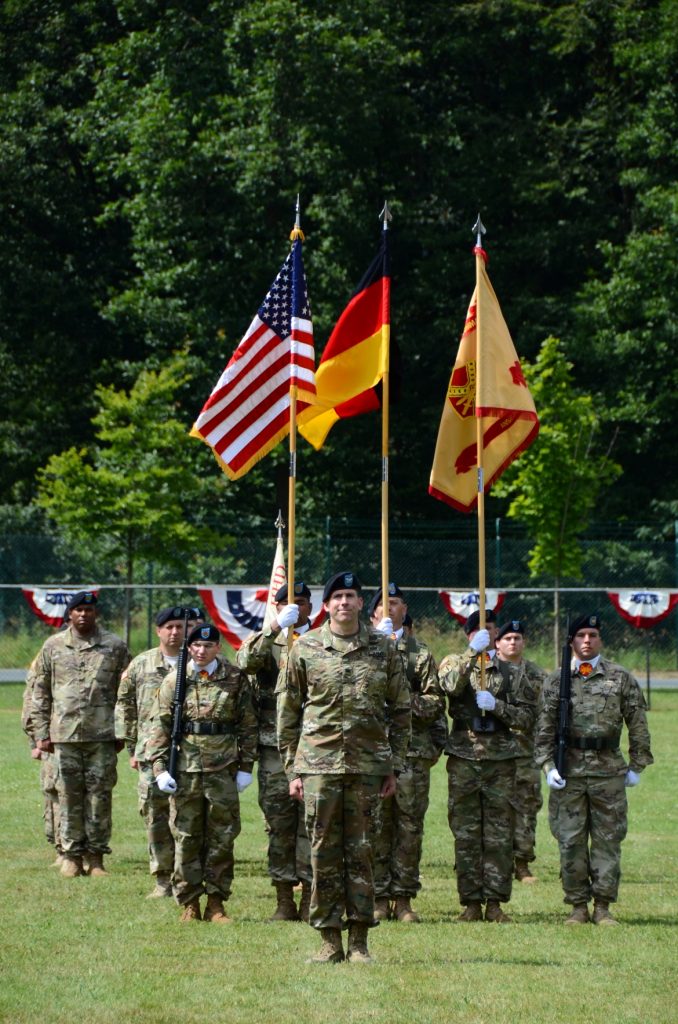