Celebration marks 30 years of partnership between USAG Ansbach and Herrieden 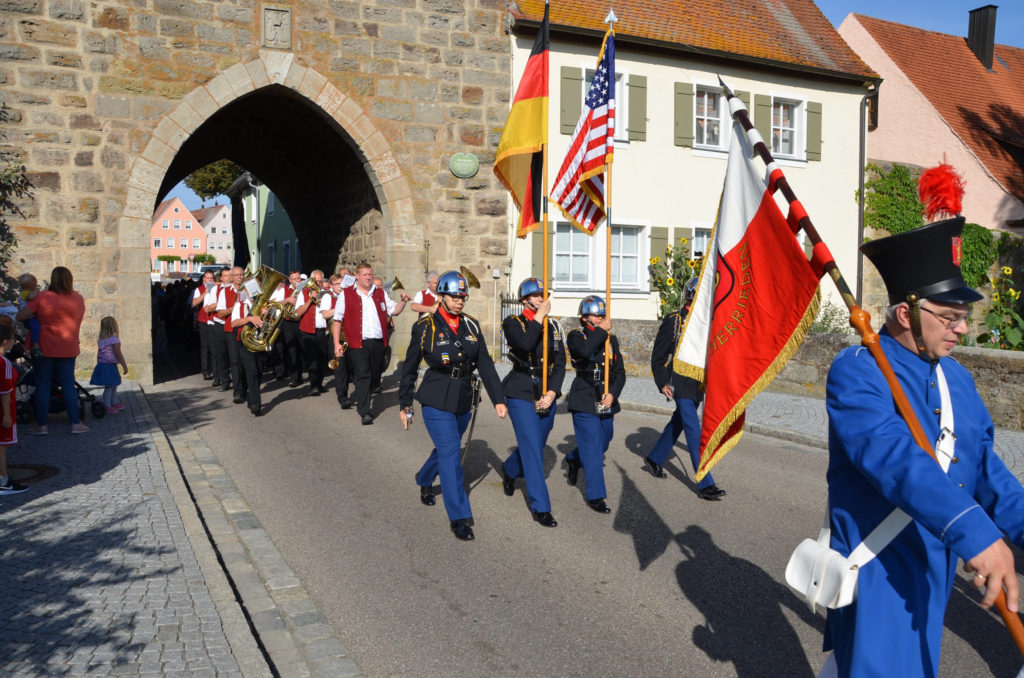 The Ansbach High School JROTC Color Guard leads the way for the parade during the recent partnership celebration of USAG Ansbach and Herrieden Sept. 17, 2018. (Photo by Mardy Manning)

ANSBACH, Germany (Sept. 17, 2018) – Thirty years ago, in 1988, a component of the U.S. Army stationed here entered a partnership agreement with the town of Herrieden, located near Ansbach.  This German-American partnership is still active and doing well, thriving even after three decades.

The city of Herrieden invited their American guests to celebrate the 30-year anniversary of this partnership during the occasion of their annual Kirchweih fest, a traditional German festivity marking the town’s church dedication. Included in the ceremonial events were not only the commander of USAG Ansbach, Col. Steven Pierce and Mayor Alfons Brandl from the city of Herrieden, but also the Ansbach High School Junior Reserve Training Corps (JROTC) color guard. The cadets of 9th Army JROTC battalion led the parade to the fest tent, carrying the U.S. and the German flags, and posted the colors on stage while the national anthems of both countries were playing.

During the ceremony, Brandl and Pierce reaffirmed their desire to continue this successful and fruitful cooperation by signing a partnership scroll in the presence of U.S. and German community members. The city’s golden book was signed, and mutual gifts and mementos were exchanged.

“The friendship we enjoy with the Herrieden community is based on the many great American families who got to enjoy living here, and our gracious host nation community members who welcome them so warmly,” said Pierce. “You include us in all your festivities and celebrations, and welcome and embrace the American residents on a daily basis. Herrieden truly is part of our belief that our military community here is the best hometown in Europe.” 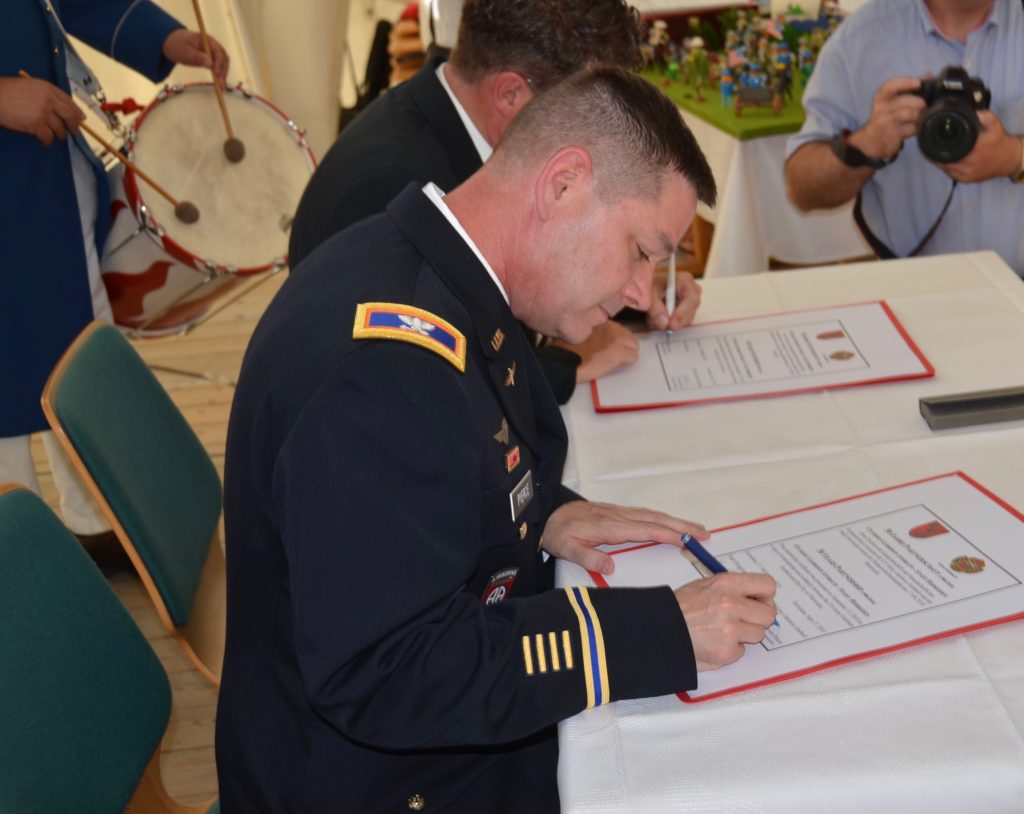 It all goes back to a Franconian chimney sweep and an American band leader striking up an unusual friendship 36 years ago. When Karl Balk, the local chimney sweep of Herrieden at the time,  and Robert “Bob” Wahlund, bandmaster of the 1st Armored Division Band, met in 1982, little did they know they were the founders of a long-lasting friendship and partnership between the city and the U.S. Army. During the years to follow, the Army band would play at official occasions in Herrieden, paying the citizens back for their welcoming reception of U.S. Soldiers and civilians. A partnership agreement was signed Sept. 8, 1988 between the city and the band.

As the music corps of the 1st Armored Division moved away in 1991, the city council decided to launch a partnership agreement between the Ansbach-based 235th Base Support Battalion (BSB) of the U.S. Army and the city of Herrieden. On November 4, 1992, Werner Herzog, mayor of Herrieden at the time, and Lieutenant Colonel Philip Sterbling, commander of the 235th BSB,  signed the partnership certificates as a sign of solidarity.

In 2006, the Installation Management Agency (IMA), Community and Family Support Center, and the Army Environmental Center were consolidated to create the Installation Management Command, or IMCOM. On Oct. 13, 2006,  U.S. Army Garrison Ansbach (USAG Ansbach) was realigned as a direct reporting garrison under the command and control of IMCOM – Europe. As the successor of the 235th BSB, USAG Ansbach proudly carried on the tradition of partnership with the town of Herrieden. 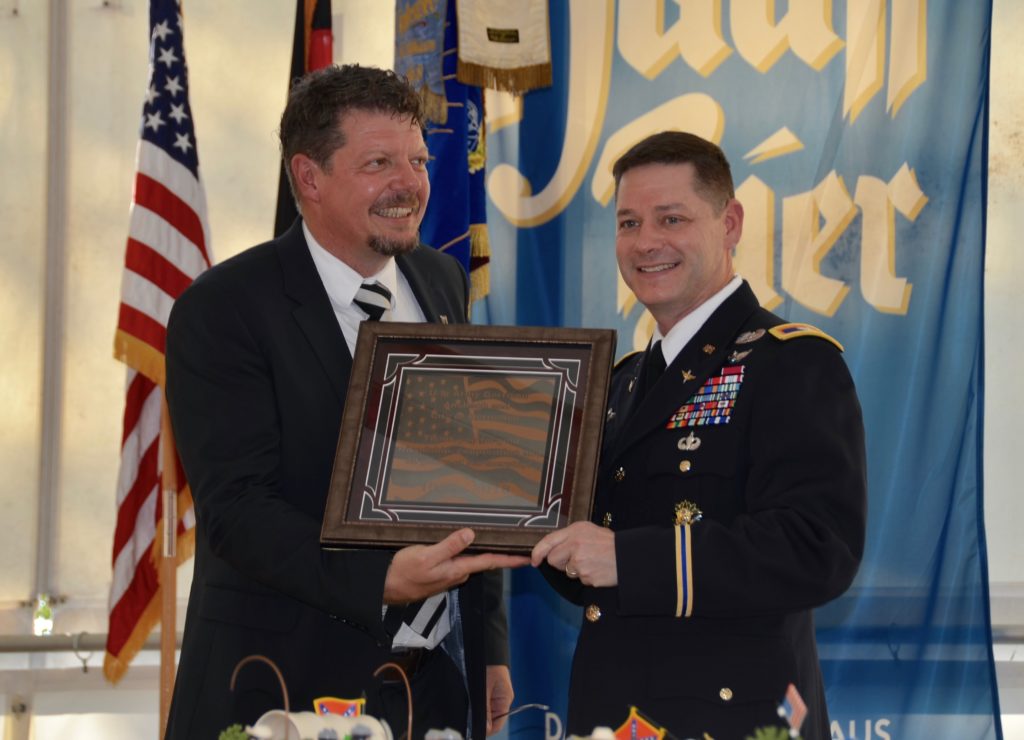 The partnership has grown and developed throughout the years. A traditional friendly marksmanship competition, which started at a Herrieden range in 1983, was moved to the Army-run range in Oberdachstetten in 1994, and has been hosted there annually ever since. Every year, the American community members are invited to participate in the many festivities, the Kirchweih fest, the Altstadtfest and the Christmas market and more. American families living in Herrieden have enjoyed a personal bond with the Herrieden citizens for decades in their daily encounters. 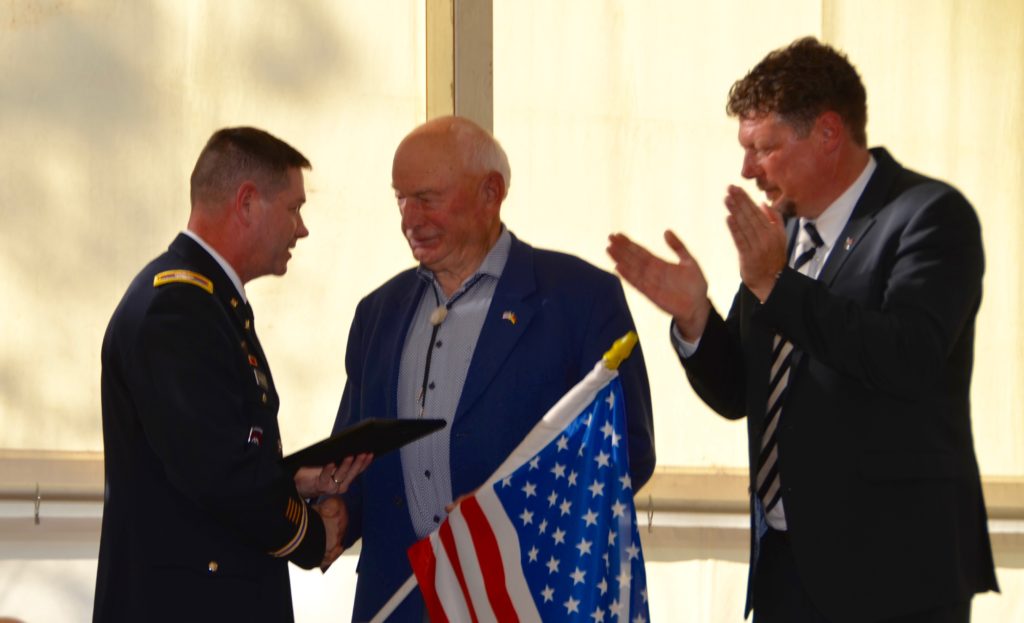 Mayor Brandl talked about the beginnings of the partnership and credited Balk, Herrieden’s partnership liaison, as the main initiator and contributor: “Karl often invited our American guests to his house or took them fishing.” The Balks were landlords to the former bandmasters, and took care of their children after school. “This shows that he did much more than his volunteer position required,” said Brandl.

Balk, also a city council member for many years, held the volunteer office of partnership liaison since 1978 and finally retired from it due to his advanced age; he received special honors and presents by the garrison and the city. Also introduced was his successor, Stefan Horndasch, a Herrieden council member and deputy county commissioner of Ansbach county.

Once all the gifts were exchanged, the official ceremonies concluded and the colors retrieved, the invited guests and their hosts did what they do best – got together, mingled and enjoyed each others’ company – a living example of  German-American friendship at the grassroots level.

About Herrieden: Herrieden is a town in the county of Ansbach and situated about 6 miles southwest of the city of  Ansbach. The first record settlement goes back to 782 as a monastery called Hasenried (Latin Nazaruda), a name that changed into Herrieden through the centuries. The rabbit – Hase in German – is still represented in their city crest.  About 8,000 residents live in the town and the surrounding villages that belong to it.