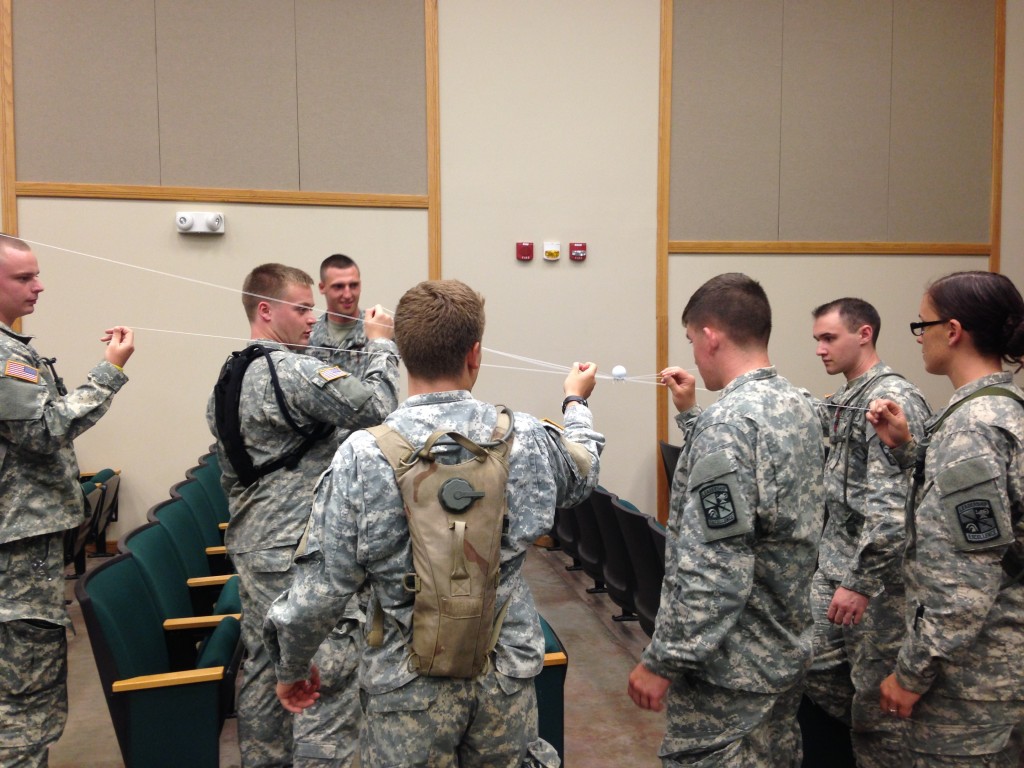 Cadets from 9th Regiment, Cadet Initial Entry Training, build confidence in themselves and their team by completing unfamiliar tasks, in this case, working together to keep a ping pong ball stabilized by pulling string taut, while moving it from point A to point B. (U.S. Army photo by Becky Farmer, Army News Service)

Master Resilience Trainer-Performance Experts, or MRT-PEs, from Comprehensive Soldier and Family Fitness Training Centers across the Army delivered the training to each of the nine Cadet Initial Entry Training regiments from June 6 through Aug. 3.

“Our primary weapons system in our brain, especially when it comes to building officers,” said Morgado.

As part of the CIET, the cadets, typically between their sophomore and junior years in college, endure an intense four-week introduction to Army life that includes leadership training, the aim of which is to motivate and qualify cadets for entry into the Senior ROTC program.

To better prepare these young cadets for the rigors of Army life and the challenges of leadership, CSF2 and Cadet Command decided to dedicate an eight-hour block of instruction at the beginning of each CIET regiment’s course in order for each cadet to learn the fundamentals of three critical mental skills: confidence, concentration, and composure, often referred to by cadets as the “Three Cs”. Adapted from training provided to Army basic trainees at Fort Jackson in 2009, the Three Cs is how CSF2 is helping to achieve the vision of  Maj. Gen. Peggy C. Combs, commander, U.S. Army Cadet Command. Combs’ vision is of “adaptive, creative, critical thinkers, who can solve problems in new, unique ways.”

“I was at the eight-hour classroom and practical exercise training, and it was very well received,” said Morgado. “So, as a brigade commander, I’m trying to figure out how I can bring some of that [training] to reinforce some of the [ROTC] curriculum we have.”

To begin the session, the MRT-PEs explained what they meant by each of the Three Cs. Confidence is the degree of certainty you have in your abilities. Concentration is paying attention to what is most relevant to avoid distractions. Composure is effectively mobilizing and restoring your energy to keep your composure under pressure. Following the lecture portion, the cadets split up into three groups to delve deeper into the theory behind each skill and conduct exercises to understand the importance of each, as well as to reinforce using the skills in a variety of situations.

“When I met each CIET platoon yesterday, I told them [the training they received from CSF2] was spot on,” said Lt. Col. Glenn Howie, professor of Military Science at East Tennessee State University and A Company, 9th Regiment, training, advising, and counseling officer at CIET. “We never got anything like this when we were starting out [as cadets]. They just told us, ‘Go do it. Tough it out.’ [The MRT-PEs] taught them how to think about how they think.”

The class was also an opportunity for the cadets to build their nascent teams. The cadets “came [to Fort Knox], met their drill sergeants, they had to dump all their stuff out, and they’re thinking, ‘Oh my gosh, what did I sign up for?'” according to Howie. By day three of the class, the performance training gives the students “a chance to work together, work as a team. I could see the teamwork start to build,” he said.

Over the next few weeks, the cadets have ample opportunity to employ their new skill sets, as they tackle events such as a high-ropes course, a tear gas chamber, M16 rifle marksmanship range, and days out in the field patrolling. Prior to each of these events, MRT-PEs reinforce the Three Cs of confidence, concentration and composure, to keep those skills fresh in cadets’ minds.

“All the training I found extremely effective, but the most outstanding aspect is seeing the cadets themselves saying how worthwhile and useful it is,” said Morgado. “And they can take the idea that’s introduced to them at an early stage in the [CIET] process, and are still referring back to that training in subsequent evolutions … Cadets have identified that it is clearly value-added.

“Cadets get it,” continued Morgado. “They understand they are going to succeed or fail by what’s going on in their head and how they deal with that.”

The last regiment of CIET graduated Aug. 12, and the cadets will take back the lessons of the Three Cs to each of their schools’ ROTC programs.

The Three Cs are just part of the performance training available across the Army at CSF2 training centers. Like they did with CIET, training can be tailored to the needs of the organization. To find a training center nearest you, visit http://csf2.army.mil/training-centers.html.

To read the story as it appears through the Army News Service, visit www.army.mil/article/153680.