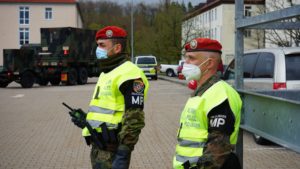 ACH, Germany (May 12, 2021) – As DEFENDER-Europe 21 is picking up speed, thousands of multinational forces from 26 nations will conduct operations across more than 30 training areas in 14 countries from the Baltics to the strategically important Balkans and Black Sea.

USAG Ansbach served a Convoy Support Center on Barton Barracks from the beginning of May as a location for refueling operations and minor vehicle maintenance.

The Bundeswehr (Federal German Army) participates in DEFENDER-Europe 21, but its main role is not a large  number of personnel participating, but Host Nation Support (HNS), especially the planning and coordination of marching routes and military police support for transit movements through Germany.

On May 5, the Bundeswehr Feldjägerregiment 3 displayed this excellent HNS to U.S. Army Garrison (USAG) Ansbach by escorting seven convoy serials transitioning from Baumholder to Amberg on the way to their final training location.

Bundeswehrhauptmann Stefan Lenz of the Feldjägerregiment 3 explained: “Our mission is to ensure the safety of the transitioning convoys as they make their way to the east. We receive our order from the Landeskommando Bayern, who is coordinating Host Nation Support. “

“In order to ensure safe passage of a convoy, the Feldjäger set up a traffic control net along the route. About nine stationary patrol vehicles are staged at pre-set road side locations. They communicate the progress of the individual march units and are therefore able to pinpoint the location and accurate count at any given time.” Lenz added. March credit is the clearance document for a section of the convoy traveling together, usually around 10 vehicles.

“At the same time, mobile patrol vehicles are tuned into the communication as they move on secondary roads close to the Autobahn. If a convoy vehicle breaks down, the mobile patrol can quickly get to the broken-down vehicle, set up traffic safety and coordinate further assistance.” Lenz explained.

To alert the convoy of their Autobahn exit, the stationary patrols set up temporary signs. A mobile patrol then escorts them to their Refueling on the Move (ROM) location. If needed they stop and direct road traffic in order to keep the marching credit together and ensure smooth transit to the ROM site.

Traffic on the German Autobahn, especially on main thoroughfares such as the Autobahn 6 (A6), which connects the West to the East, is unpredictable as seen on the morning of May 5, when the convoy was stuck on A6 for several hours due to a major accident. 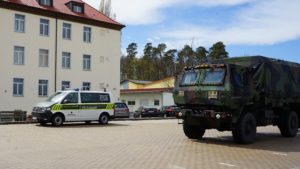 Jason Davis, USAG Ansbach Convoy Support Center coordinator said: “That morning, we quickly had to prepare for the rest and refuel stop at Barton Barracks after the original plan was for them to push through. The Feldjäger proved to be a tremendous help as they made the transit from the Autobahn 6 to Barton Barracks so smooth. They guided them all the way in to the Barton Barracks ROM site and back out.”

After a well-deserved break and discussing continuation plans with the convoy commander, the Feldjäger escorted all 10 convoys back to the Autobahn and continued their mission of providing safe passage for the convoy all the way to Amberg.

As Lenz said: “During a successful mission, the convoy drivers should hardly notice us. We work in the background, but we are there, if they need us.”

The Feldjäger mission goes beyond convoy support. During Defender-Europe 21, the Feldjägerregiment 3 also conducts all physical security on buses for troop transportation from the airport to the training location. And they escort them in the background, as loyal NATO Partners.