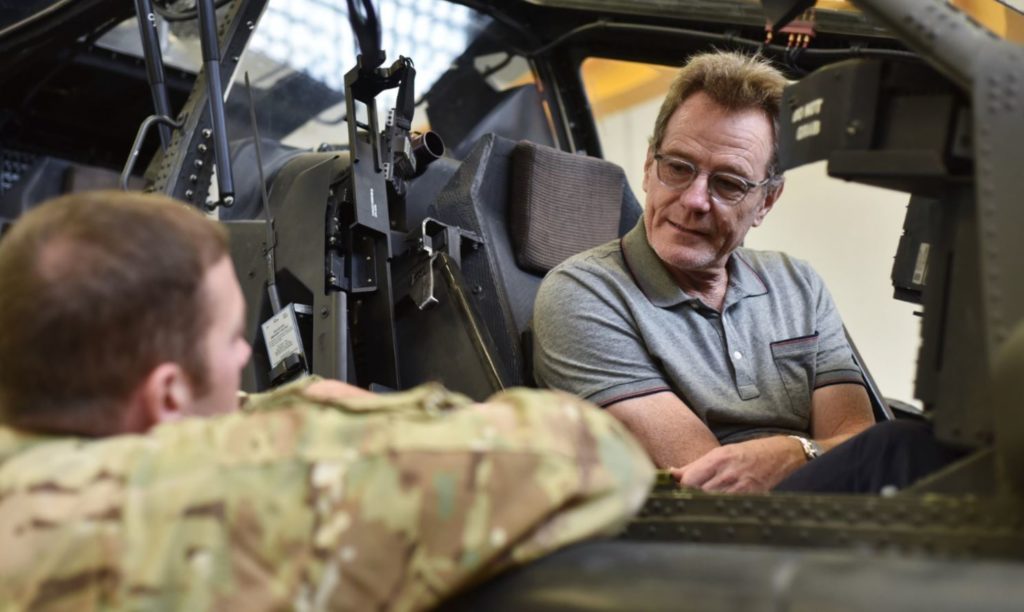 Cranston, who’s been in more than 50 movies and even more TV shows, is most famous for his role as Walter White in AMC’s Breaking Bad TV series – for which he has won four Primetime Emmys for Lead Actor in a Drama Series. The actor is also well known for his role as Hal in the Fox comedy series Malcolm in the Middle.

Unlike some of his appearances at other military installations in Europe, he chose not to publicize his visit to Ansbach in advance so that he could meet with community members in a more spontaneous way and in more natural environments. His visit included stops to catch Soldiers and Army civilians by surprise in their everyday working environments such as in health clinic hallways and waiting rooms, airfield hangars and even during lunch breaks in the dining facility.

“I really wanted to do this, and I’ve wanted to do it for a long time,” Cranston said about visiting members of the military community.

After lunch, Cranston made a special stop at USAG Ansbach’s Terrace Playhouse, where he sat down for an almost hour-long Q&A with theater volunteers and members of the garrison’s book club. Cranston discussed his favorite and most challenging roles, the preparation that goes into performing, and the audition process.

“His approachability and candor during the Q&A really impressed me,” said James S. Dill, who serves as USAG Ansbach’s Emergency Management program manager and who frequently performs and volunteers with the Terrace Playhouse. “I’m so grateful he took the time to meet with us and open up to us about his craft. I think this will greatly benefit those of us in the theater.”

Cranston also had advice to those who want to perform professionally.

“You really only should try to become a professional actor, writer, director if you love it — if you have a burning desire,” Cranston had told one Soldier earlier in the tour. “The people who do theater are no different than me. So, what I try to tell people who are enthusiasts of the profession of acting is different from the desire to act. They’re both acting. We approach it the same way. We get the same thrill, the same nerves and excitement of being on stage. … If they can be happy doing something else, they should do that something else because there’s never going to be a shortage of people in my profession.”

One of Cranston’s last stops was to the Flight Simulator Facility at Storck Barracks, where he took the controls of a UH-60 Black Hawk simulator. Flight Instructor Wendall “Spike” Condon had Cranston fly through heavy fog and handle a double engine failure.

Condon also asked Cranston to try landing the aircraft on a Navy frigate: “A frigate?” Cranston asked. “You gotta be frigate kidding me!”

Cranston ended his Ansbach visit by meeting with Soldiers until after duty hours.

“I think if you’re fortunate enough to have a busy career, you can sometimes find yourself being insulated from the outside world – from people who live in different parts of the world and have different occupations,” said Cranston. “From time to time, I realize I get a little antsy, and I want to get out, I want to shake hands with people, I want to meet people I would not ordinarily meet in my everyday life. And then the factor of meeting military personnel who are doing heroic things, and I’m truly grateful for their service.”

To see this story as it appears on Army.mil, click HERE.